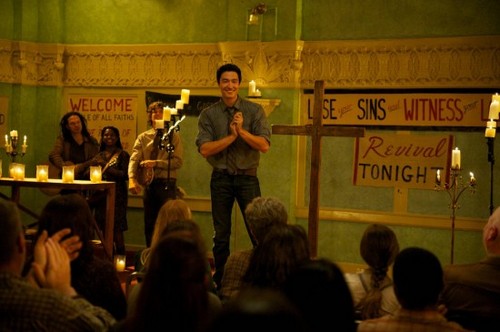 Tonight REVOLUTION returns to NBC with a whole new episode called “Happy Endings.”  On tonight’s episode Neville (Giancarlo Esposito) gets a new assignment and Aaron (Zak Orth) reunites with an old friend.  Did you see the last episode?  We did and we recapped it here for you!

The General might have been crafty cornering Connor but it’s a good thing everyone suspected he was going to betray them. Connor ensured his own safety by using Truman as a human shield and just so no one got any ideas; Miles and Monroe backed him use long range rifles. Connor was able all the vials of the cure, the general was hiding, and make a run for it. Technically, he promised to help Truman although if one man can break his word then why not the other.

Connor reached Gene in time. Movements before Gene had lost his pulse and his family were getting desperate trying to find a way to save him. So Connor’s timing was perfect. They gave the cure to Gene and everyone else they could manage. Afterwards they fled the makeshift hospital pretending to go on a supply run.

Neville might have found a way to regain his family. He was pulled out of his jail cell to attend a meeting with the president of the United States of all people. It seems the president needs something from him. He needs Neville to kill Monroe for him. The Texans are starting to get at his administration for not being able to kill Monroe the first time. The President has to makes sure there won’t be another slip up.

In order to get Neville to cooperate, the President is willing to use Julia. If Neville doesn’t do the job he was asked then Julia will slowly begin to lose body parts. Neville agrees to the job but only if his son can go with him. President Davis was amazed his prisoner was suddenly making demands but once Neville explained how good of a tracker Jason is then he was allowed to collect him.

They arrived in Willoughby right around the time Monroe left to go to New Vegas. Their small team of rebels doesn’t really stand a chance against the Patriots unless they get some much needed back up. So Monroe convinces Miles to let him get some mercenaries from an old friend. Miles agrees despite not trusting Monroe and Connor together. He and Rachel have begun to realize that nothing good can come from the two men getting cozy. So Charlie decides to go with the guys. Miles can’t leave Rachel and Rachel can’t leave her dad. Charlie is the only option. Not that it makes her family feel better about her decision.

Her mother an uncle had a right to be worried. New Vegas isn’t the safest place to be. Monroe even warns Connor to keep his mouth shut and let him do all the talking. As it turns out, though, he should have warned Charlie instead. Monroe’s meeting with his good friend, Duncan, wasn’t going off well and Duncan’s people pulled out their weapons and no shocker there so did Charlie. Monroe got everyone to calm down but Charlie and Connor had to take a walk outside.

In the short time there were alone, Connor admitted to Charlie how much she surprised him. She’s not like the girls he’s used to back home. His small show of admiration sort of set flirtatious environment between them. Connor has been flirting with her from the beginning but this was the first time Charlie responded because she wanted to and not because she was manipulating him for more information.

Aaron and Priscilla arrived to Lubbock, Texas. There they found an old friend from MIT. His name is Peter and he helped them build the nanos. The A.I. has brought of all its creators together again regardless of no one knowing why. Aaron and Priscilla were enjoying their reunion when they noticed something strange. Unlike them who ran away from the nanos’ special gift, Peter embraces it. He misguidedly thinks its God. And he prays/makes the nanos perform miracles he credits to him being God’s prophet.

Priscilla and Aaron quickly notice that it’s the nanos. Later after his congregation have all gone, they tried to explain to Peter that God isn’t speaking through him but he doesn’t want to listen. At least not yet. For the past couple of months he’s come to rely on his faith. He can’t give it up so easily.

Charlie and Connor slept together. He’s wondering if it’s going to be awkward seeing as she hates his dad and everything. While Charlie doesn’t necessarily view their situation that way. Connor had told her he wasn’t like his father and she says they might as well have fun as much they can. Charlie figured with the way things are that they’ll all be dead within a year. Connor asks her what about hope but Charlie doesn’t have that anymore. She chooses to be realistic.

Monroe happened to walk in on them before they could get dress! He tries to tell Connor to think things through but that doesn’t work when Monroe has only been his dad for the past 15 minutes. He demands his father treat him like a partner or else they won’t be able to work together. As for Charlie, she doesn’t think anything requiring fuss happened.

Miles talked Rachel into leaving her dad for a few minutes. He swore everything would be fine with Gene. Miles simply wanted a normal night out with Rachel and she assumed they had enough of foreplay anyway. However when they returned to her dad they noticed that he wasn’t alone. Neville and Jason had joined him. Miles was apprehensive about this sudden arrival and questioned why they followed him. Neville used his skills as master manipulator to pretend that he wanted to get justice against the Patriots. He said that they killed his wife during the bombings and now he wants to destroy them. Jason even goes along with the lie. He swears on his mother’s grave that his father is telling the truth.

Aaron and Priscilla didn’t realize how much Peter must have changed. Their old friend locked them up the moment he could. He said that he couldn’t allow them to take away people’s faith. He claimed it was too delicate. Still, seeing as they are together then they might as well stay that way. Just until the nanos informs them of the grand plan.

Monroe set up a deal with Duncan to buy the mercenaries and now all they need is the money. Monroe was supposed to be the distraction while Charlie and Connor pulled the con. And their plan was working. Charlie pretended to have stolen everything while Connor makes the actual grab but they were caught. Charlie didn’t mean to drop the decoy and yet when she did it allowed the people she stole from to know they’d been had. Connor and Monroe were never able to make it out of the city. They were grabbed.