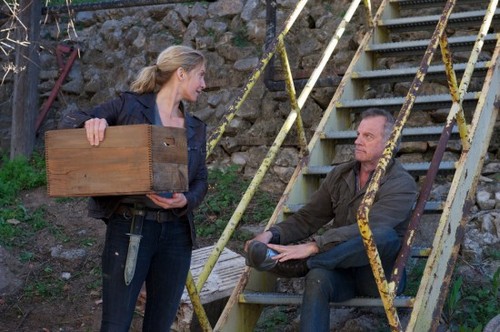 Tonight REVOLUTION returns to NBC with a whole new episode called “Exposition Boulevard.”  On tonight’s episode Miles, Charlie and Connor return to Willoughby and discover the town now has a reeducation center. Meanwhile, Rachel and Miles clash over the extremes they’ll go to when fighting the Patriots.  Did you see the last episode?  We did and we recapped it here for you!

On the last episode Aaron (Zak Orth) awoke to find himself in a world with power, married to Priscilla (Maureen Sebastian) and running his company. As he got the feeling that something wasn’t quite right, familiar faces began to appear. Also starring Billy Burke, Tracy Spiridakos, Giancarlo Esposito, David Lyons and Elizabeth Mitchell. Special appearance by MSNBC’s Chris Hayes.

On tonight’s episode Monroe (David Lyons), Charlie (Tracy Spiridakos) and Connor (Mat Vairo) make their way back to Willoughby, where they find that the Patriots’ reeducation center is up and running. An encounter with two of the center’s young cadets leaves Rachel (Elizabeth Mitchell) and Miles (Billy Burke) divided on the lengths they are willing to go in order to take down the Patriots. As Neville (Giancarlo Esposito) and Jason (JD Pardo) find a new ally for their mission, more about the history of the Patriots is revealed. Also starring Stephen Collins, Christopher Cousins, Steven Culp, David Aaron Baker, Cotter Smith and Julius Washington.

Tonight’s episode is going to be great and you won’t want to miss it. So be sure totune in for our live coverage of NBC’s Revolution tonight at 9PM EST! While you wait for our recap, hit the comments and let us know what your think of Revolution season 2, so far? Check out the sneak peek video of tonight’s episode below.  Hit the comments and let us know your thoughts!

The impasse remains tense with Rachel, Miles, Neville, and Jason all refusing to stand down. All the guns drawn was one thing, but Neville had done his best to try and talk Miles out of protecting Monroe and just when he was starting to get to Rachel they were interrupted by Doyle of all people. Doyle and his men came marching in when honestly Neville has the situation in hand; and that allowed Miles and Rachel to escape.

Neville couldn’t understand why Doyle would ruin mission like that until later. Doyle explained that Monroe will get taken in, but not by Neville or his son. It seems he wants to be the one that had the honor so that he could demand a favor back from the president. The favor he wishes to extract is the execution of Neville and his wife because Doyle felt personally insulted that these two traitors were allowed to live after they had nearly killed him. So there’s no way he’s going to let Neville gain the opportunity to be pardoned.

The gang is back from New Vegas along with a couple of new guys. That’s all nice and everything, but Miles was really looking forward to a lot more men than Monroe brought back. Though he was happy that Monroe came through with his promise.

Don’t worry, Monroe quickly corrected him. After all it wasn’t him that brought the extra soldiers and it’s not like the men were going to take orders from him anyway. No, these guys were given to Charlie and she’s the one in control.

Not that the Monroe thinks she’s even close to being good enough for his son. He made Connor promised him back when he was sure he was going to die that the young man would grow old surrounded by his family – as long as Charlie wasn’t in that picture. Only to have Connor change his mind and continue to flirt with Charlie once they got back to Willoughby.

Gene picked up on the kids’ chemistry and pointed it out to Rachel. He’s had experience knowing what a rebellious daughter is up to. So he knew they were sleeping together! Admittedly Rachel didn’t want to see but it’s kind of hard to miss seeing as Charlie is eying Connor’s butt every chance she gets.

Although Rachel never got the chance to her daughter aside – Miles and Monroe returned from patrol with familiar prisoners. They were actually kids from the town and Gene knew the both of them.

These kids were part of the reeducation center that Doyle started near Willoughby. But because they were still just kids Gene asked for leniency. He wanted to be able to return the kids to their parents. And Monroe didn’t like that. He said these kids were being trained to kill off the lot of them so why wait to kill them. Better it be done now than later.

Rachel and her father however managed to gain Miles’s support on the issue. He escorted them back to the town to drop off the kids But something went horrible wrong. Just because the kids still looked innocent didn’t mean that they were. They had a special programming set in them and whenever someone reads out loud their numbers (the ones that Patriots tattooed on their eyelids); their training takes over.

One of the “kids” killed her own father and when she was unable to hurt anyone else she then slit her own throat. After witnessing something like that, Miles decided not to let the other prisoner go. Instead he took him back to their safe house.

Sorry Rachel, but Miles is on Monroe’s side for this. They can’t allow these cadets to live. Given half the chance these killing machines will wipe them all out and he was right. They ended up getting attacked by the soldiers that very same night.

Neville couldn’t get Doyle to provide him the men je needed so he went to Truman. Truman can’t stand Doyle either so breaking direct command was a perk. His men moved on the safe house in onslaught of raining bullets.

If the guys hadn’t been fortunate enough to escape then they would all be dead. Though during all the chaos Miles allowed his prisoner to go. When it came down to it he couldn’t kill a kid in cold blood. No matter what the consequences will be down the road.

Monroe was angry with him and vented it the moment they were all safe. He felt Miles should have taken the shot when he had the chance but Miles is on the defensive. He knows Monroe is only invested because he wants the republic back. All he had to do was keep pushing him and Monroe even admitted it. He does want to be in charge again with his son at his side this time – still at least he knows what he’s fighting for. Why is Miles fighting though? It surely can’t be to live in peace with Rachel and Charlie…

Disobeying orders was bad but failing to apprehend Monroe made it worse. Doyle took both Neville and Truman to task. And yet he chose to demean Truman (whose been a part of the Patriots from the very beginning) to the point that he’s considering Neville’s suggestion – maybe they should get rid of Doyle.

But Doyle is too smart to trust his enemies. He called in Jason and re-activated his number. Once Jason was back to being the compliant little soldier he was grilled about his father’s plans and now Doyle will know every move Neville has and will make.

Aaron and Priscilla want to start over but the nanos haven’t given up on them yet. The freaky fire flies started again with Priscilla.