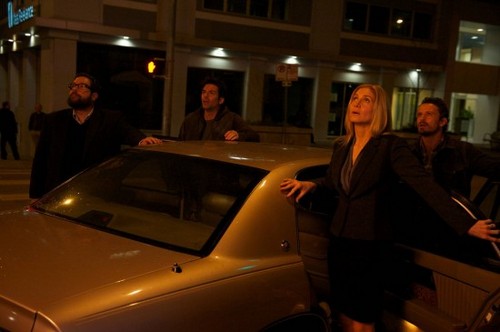 Tonight REVOLUTION returns to NBC with a whole new episode called “Dreamcatcher.”  On tonight’s episode Aaron wakes up in a world with power and finds himself married to Priscilla and in charge of his old company. However, things seem a bit out of sorts to him, and then familiar faces start to surface.  Did you see the last episode?  We did and we recapped it here for you!

On the last episode with their lives in danger in New Vegas, Monroe and Connor faced a difficult decision in order to survive. Back in Willoughby, Miles questioned whether he could trust Neville and Jason to help take down the Patriots. Meanwhile, Aaron and Priscilla found themselves at odds over the nano code.

On tonight’s episode Aaron (Zak Orth) awakes to find himself in a world with power, married to Priscilla (Maureen Sebastian) and running his company. As he gets the feeling that something isn’t quite right, familiar faces begin to appear.Also starring Billy Burke, Tracy Spiridakos, Giancarlo Esposito, David Lyons and Elizabeth Mitchell. Special appearance by MSNBC’s Chris Hayes.

Tonight’s episode is going to be great and you won’t want to miss it. So be sure to tune in for our live coverage of NBC’s Revolution tonight at 9PM EST! While you wait for our recap, hit the comments and let us know what your think of Revolution season 2, so far? Check out the sneak peek video of tonight’s episode below.  Hit the comments and let us know your thoughts!

An alternate universe has taken over. And rather than be a world where the power never went out – Aaron can recall his past. It starts coming back to him in flashes even while he’s trying to enjoy his new/what-if life as millionaire with his beautiful wife, Priscilla. The last thing that happened to Aaron before he blacked and awoke in this world was when he killed the nanos. Or better yet when he thought he killed them.

But there’s something off about this alternative universe. Back at his company, he keeps running into a couple of employees that what him to fix a broken a code. The firs time they asked for his help he saw Rachel on TV and it prompted a flashback. His past memories tend to need something or better yet someone to prompt it and that’s how it all starts coming back to him.

Problem is he doesn’t know which world is real and natural Aaron, who was never the strongest of the group, starts to crack. He began worry about losing his mind and needed his wife to take him home to get his head straight. By the next day he made himself believe that that life was real. So he went to back to work.

Again he was asked to help out with the coding and had gotten close to fixing it when Charlie intervened. She killed off his employees and kidnapped him.

It seems Aaron never did finish killing off the nanos. Charlie who was really a figment of his imagination told him that the nanos built this program inside of his head to get him to fix the code. Or in layman’s terms this nanons have a pulled a Matrix! And there is a part of Aaron that knows he’s being manipulated and that why he created Charlie to help him wake up.

“Charlie” told he needed to find his old friends – Rachel, Miles, and everybody – they can help him escape. But he has to be careful. The nanons are willing to kill anyone that can help. They killed “Charlie” and they will kill anyone else that stands in the way of them getting fixed.

Not that there are a lot of volunteers seeing as none his friends even remember Aaron. He tried approaching Rachel with the truth and stun gunned him. But to be fair any woman would have when a stranger comes up to you calling himself your family. Anyways Rachel did her best to make a run for it when Aaron was able to conjure up a gun.

His ability to alter this universe is what helps saves him on numerous occasions. He summoned up a gun to get Rachel to bring him to Miles and he had to summon weapons for Miles and Monroe to get them to remember him. Those boys do love their swords. So much so that they “woke up”.

Now its Aaron’s turn to wake up. Rachel suggests they use something that will terrify him enough into doing the job. Aaron doesn’t particularly care for the idea but he is scared of falling and they can always use his place to get it done.

The nanos tried to stop him from jumping and when reasoning with him (if using his wife can be called reasoning) wouldn’t work they then attempted to torture him using his the body of a known sociopath. Yet none of it could work because Charlie was right. His friends did help him just not in the way he expected. They helped him realize he can control what’s going on within his own mind. It was time for him to stop reacting.

So he took control back and made himself wake up. He found himself lying on the floor surrounded by Priscilla and Peter. And thought this was better than any fake universe the nanos could have created but there was a problem. Without the nanos the power was coming back and it was dangerous. There was devastating lightning happening everywhere.

When Aaron finally was reunited with Rachel and Miles he found out how dangerous shutting down the nanons really was. A lightning bolt had hit Rachel and Aaron knew he had to fix everything. If he had the time to think it over; he could have realized a perfectly convenient laptop just lying around couldn’t be real. However he didn’t have the time and it wasn’t until after he finished fixing up the nanos that he realized he was tricked.

His creation manipulated him into thinking he woke up. To do what though remains a mystery. The nanos apparently have a plan and Aaron is no longer part of it. Once they were done with him it was ok to set him free.

Now all Aaron wants to do is go home. He under the mistaken impression that it would better there but he doesn’t know about Neville and co!