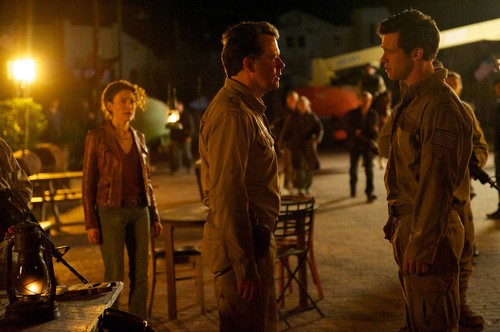 Tonight REVOLUTION returns to NBC with a whole new episode called “Why We Fight.” On tonight’s episode Miles and Gene look for allies in Willoughby. Meanwhile, Monroe launches a surprise attack on the Patriots; Neville’s actions jeopardize him and Jason; and Aaron and Priscilla remain steadfast in their journey. Did you watch the last episode? If not we have a detailed recap of it for you right here.

On the last episode Monroe (David Lyons), Charlie (Tracy Spiridakos) and Connor (Mat Vairo) made their way back to Willoughby, where they found that the Patriots’ reeducation center is up and running. An encounter with two of the center’s young cadets left Rachel (Elizabeth Mitchell) and Miles (Billy Burke) divided on the lengths they are willing to go in order to take down the Patriots.

As Neville (Giancarlo Esposito) and Jason (JD Pardo) ouind a new ally for their mission, more about the history of the Patriots was revealed. Also starring Stephen Collins, Christopher Cousins, Steven Culp, David Aaron Baker, Cotter Smith and Julius Washington.  Did you watch the last episode? If not we have a detailed recap of it for you right here.

Although Miles will never say it, Monroe’s assessment of the young recruits was correct – they should never have trust any of them. But because Miles listened to Rachel and Gene instead of Monroe they’re currently forced to keep moving their entire rebels’ camp.

Earlier Miles had let one of the Patriots’ recruits, Dillon, go. He thought it wouldn’t be right hurting a kid and had figured Dillon would be so grateful towards them that he wouldn’t betray anyone… And he was wrong. The first thing Dillon did with his new found freedom was to head straight back into the Patriots’ camp and tell them everything. The little punk even told them were Miles’s old camp was.

So naturally Monroe is busy with “I told so” and that has perhaps made him too busy to come up with a constructive plan. Though Gene seems swears he found an answer to all their problems.

They need men and Monroe isn’t bringing any so Gene hatches up a way they can enlist the good people of Willoughby. He thinks if he can get the chance to simply talk to the townspeople about what the Patriots are really up to then they’ll want to fight back. However this plan is taking on a lot of risk because so far the town appears to have fully embraced the Patriots and that might not change just because Gene chooses to have faith.

Gene and Miles left the others to see who in the town could help, but not even Gene’s closet friend, Mary, wants to believe him. And honestly how can she? Gene disappeared for months and then suddenly returns talking about how all the Patriots are evil. Well, if they’re so evil then he should have suspected the Patriots will pull a snow job.

The townspeople were fed false information about Gene. They were told he was a terrorist and if Mary, who as it turns out was a lot more than simply a “friend”, could buy this story then there is no hope for Gene or his plan.

Gene could be risking his life over this little endeavor and surprisingly it might not even matter in the grand scheme of things seeing as Monroe ended up getting the men he needed anyways. Apparently the Patriots have been trying to clean up the gang activity in the Plains and therefore attacked Duncan’s camp among others and killed her. Many of her men were able to escape the carnage and seek out Monroe. They did this knowing that Monroe was the best person to help them get revenge for their fallen leader and they were correct in their assumption.

Monroe wants to use his men to attack the Patriots’ camp but Rachel advised him otherwise. She told him to wait for Miles before acting and he in turn chose to ignore her. Now that he has men; he didn’t feel like he needed Rachel anymore.

His timing couldn’t have been better if Neville planned it himself. The camp came under attack right when Neville faced some tough grueling from Doyle. Doyle had had enough of Neville and was close to killing him when the gunshots outside startled everyone. It was that one second of hesitation that allowed Neville to overpower his captor and finally kill the guy that has been torturing his wife and son.

Neville and Jason fled in the aftermath while Monroe and his people made sure that all the Patriots were dead. Even to the disgust of Charlie who saw Monroe killing injured men on the ground. After that she turned to Connor and asked him if he was really ready to work alongside someone like that.

Back in the town, Mary was finally coming around to Gene’s side and that was a big concession on her part. She also happens to be engaged to Truman, but she was still willing to betray him until she saw what Monroe had done. The bodies of the kids were carried into the town and in that second she knew that she couldn’t trust Gene. She told Truman where the guys were hiding out and didn’t care if her former boyfriend managed to live through the assault.

Now Miles and an injured Gene are on the run and their family is literally falling apart without them. Rachel tried to talk some sense into her daughter. She told Charlie that she could still have a life outside of the violence, but Charlie wasn’t going to take any advice from her. She knows her mother is capable of some horrendous things so to see her get on a soapbox is pretty ridiculous.

Violence is the only way to live in this world and pretty soon even Miles embraces that concept. He returned to the camp angry with Monroe. But Monroe reminded him about the bigger evil in their lives – the Patriots. His men found out the Patriots had sent out men on a mission. They were going to make the recruits (the kids) assassinate everyone important in the Texan government.

So Miles really needs to decide who or what he’s fighting for. Because now isn’t the time for people like Rachel and Gene.