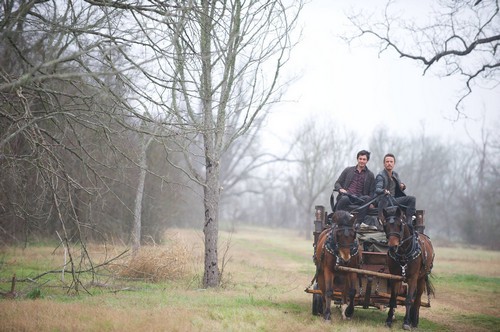 Tonight REVOLUTION returns to NBC with a whole new episode called, “S#!& Happens.”  Miles finds himself alone and injured after an encounter with the Texas Rangers. Meanwhile, Neville seeks answers from Charlie regarding Jason’s whereabouts; and Aaron discovers how hardworking the nanotech is.

On last week’s episode frustrated with Neville (Giancarlo Esposito), Jason (JD Pardo) turned to Miles (Billy Burke) with crucial information about the Patriots’ next steps for Texas. Determined to derail the Patriots’ plans, Miles and Monroe (David Lyons) rushed to Austin with Jason, Charlie (Tracy Spiridakos) and Connor (Mat Vairo) in tow. Meanwhile, Aaron (Zak Orth) grew suspicious of Priscilla’s (Maureen Sebastian) increasingly unusual behavior. Also it starred Stephen Collins and Elizabeth Mitchell.  Did you watch last week’s episode?  If you missed it we have a full and detailed recap, right here for you.

On tonight’s episode as Miles fights for survival, Charlie confronted by Neiville in the aftermath of Jason’s death as Miles (Billy Burke), Monroe (David Lyons), Charlie (Tracy Spiridakos) and Connor (Mat Vairo) rush to escape Austin, a confrontation with Texas Rangers separates Miles from the group. While out searching for Miles, Charlie is confronted by Neville (Giancarlo Esposito) who demands information on Jason’s whereabouts. As a wounded Miles faces increasingly hopeless circumstances, Aaron (Zak Orth) learns that the nanotech has been busy. Also starring Elizabeth Mitchell, Maureen Sebastian and Tim Guinee

Charlie has to live with what she did to Jason. Although she killed him in self-defense he was still a good friend to her. And at one time he was actually something more. So it’s hard for Charlie to think of anything else other than Jason, but she’s going to have to.

Miles and Monroe know that Neville will come looking for his son and they rather kill the man first before he could find out what Charlie did. Because if Neville learns the truth then he’s going to kill Charlie. No hearing or trial required!

The guys were leaving Texas when they noticed some rangers on their trail. So they came up with a plan – Miles would lead the rangers away and the rest of them would make a run for it back to their base camp.

Though the plan sort of blew up in their faces when Miles had a minor wagon accident. So he was on foot and alone when the Rangers wedged him in. Luckily, he was able to fight his way out of the problem, but there will be more Texas Rangers heading their way.

The government of Texas believes Miles and Monroe to behind the failed assassination attempt of their president and they’re not going to give up hunting these guys. Which just sucks for Miles. He lost his ride and now has to make it back to the camp on foot. Not to mention he was also injured during the fight with the Rangers.

When Charlie returned to the camp and didn’t see him; she began to get worried. Especially as Miles should have made it back before them. So she and Rachel chose to go look for him. And Monroe reluctantly tagged along. He didn’t want to at first and then changed his mind only to have Connor make fun of him.

Connor thinks Miles can handle himself and he couldn’t comprehend why anyone was making such a big deal over a few missing hours. He was alone with this opinion and he would have been the sole person in charge at the camp as well if Aaron hadn’t stayed behind.

Aaron was just as worried as everyone else. Only he stayed behind to try his hand at winning the Nanos controlled “Priscilla’s” help. Aaron wanted their help in finding Miles and yet they refused this simple task. It seems they personally don’t care for Miles. When they tried to mess with his head like everyone else’s they ended up finding something very dark in his psyche.

Without the Nanos to help – it’s a difficult task to even track Miles much less find him. Monroe, Rachel, and Charlie had to split up in order to check out all the possible routes.

Monroe allegedly ran into a dead end on his and soon joined Rachel in trying to locate Miles. And Rachel didn’t like that. She’s uncomfortable being around him alone. Usually Miles would act as a buffer between them.

As for Charlie, she ran into someone she dreaded meeting. Neville got the better of her, but he didn’t want to kill her right off. All he wanted to know was where his son is and Charlie didn’t have the heart to tell him the truth. So she lied. She told him she hasn’t seen Jason.

Neville knows she’s lying. His son loves to go running to Charlie and he told her so. Jason has always been head over heels for her and that’s why he threw away his bright career and every possible advantage he could have had because Charlie needed him to.

Monroe and Rachel had a few problems of their own while looking for Miles. They finally confronted each other and it wasn’t pretty. Monroe called Rachel a sociopath and Rachel called him an insecure child. Then there was a kiss (that Monroe initiated and that Rachel refuse to take part in) which they surely won’t be mentioning to anyone in the future.

Charlie tries to escape Neville and she can’t. Neville knows how to detect people’s weakness and he starts chipping away at the lies she’s telling him. Then when he does get to the truth – it breaks him. He gets so caught up in his grief that he allows Charlie to leave unharmed.

He loved his son and a part of him knew that Charlie loved him too. That’s why she got a second chance to live.

Charlie was so grateful to walk away. She didn’t know how much she wanted to live until it was almost too late. And what is she choosing to do with her second chance at life? Unlike Connor who thinks it’s a lost cause; Charlie went back out again looking for Miles.

No one can find him and his situation is looking direr by the minute. The reason why Miles can’t be found is because he fell into an underground bunker and there’s debris covering the opening. So he’s buried alive and the lack of oxygen or possibly just his inner demons is starting to get to him.

Visions of his angry dead brother isn’t a good sign! And thankfully Miles knew it. He also knew the best way to get help was to try and signal for help. So he started a fire that could have very well killed him.

But what about that kiss. Was there something between Monroe and Rachel that Miles doesn’t know about?