BY Caryn Doti Chavez on May 14, 2014 | Comments: one comment
Related : Recap, Revolution, Television 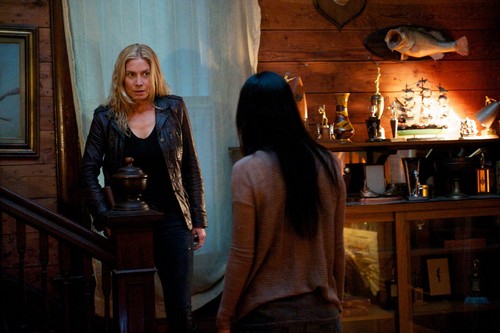 Tonight REVOLUTION returns to NBC with a whole new episode called, “Memorial Day”.” Neville and Monroe team up to defeat the Patriots. Meanwhile, Rachel encounters the nanotech as she looks for Aaron; and Miles, Charlie and Gene attempt to swipe the Patriots’ stockpile of mustard gas.

On last week’s episode Neville enlists Monroe in his plans to get revenge on the Patriots United by their desire to take the Patriots down, Neville (Giancarlo Esposito) and Monroe (David Lyons) form an uneasy alliance. As Rachel (Elizabeth Mitchell) comes face-to-face with the nano-tech while searching for Aaron (Zak Orth), things don’t go according to plan for Miles (Billy Burke), Charlie (Tracy Spiridakos) and Gene (Stephen Collins) when they try to steal the Patriots’ supply of mustard gas. Also starring Mat Vairo, Steven Culp, Maureen Sebastian, Reiko Aylesworth, Anthony Ruivivar, Cotter Smith, Billy Lush, Jordan Dragonking.  Did you watch last week’s episode?  If you missed it we have a full and detailed recap, right here for you enjoyment.

On tonight’s episode Miles and Monroe plan to fight dirty when the patriots change tactics Truman (Steven Culp), empowered with new authority from the President, launches a mustard gas attack designed to kill Miles (Billy Burke) and Monroe (David Lyons). To Rachel’s (Elizabeth Mitchell) disappointment, Miles agrees to join Monroe in a ruthless plot to beat the Patriots at their own game. As Neville (Giancarlo Esposito) faces his own challenge from the Patriots, Aaron (Zak Orth) grows increasingly alarmed by the power of the nanotech. Also starring Tracy Spiridakos, Stephen Collins, Mat Vairo, Reiko Aylesworth, Waleed Zuaiter, Cotter Smith, Maureen Sebastian, Billy Lush.
Tonight’s episode is going to be great and you won’t want to miss it. So be sure to tune in for our live coverage of NBC’s Revolution tonight at 9 PM EST! While you wait for our recap, hit the comments and let us know what your think of Revolution season 2?

United by their desire to take down the Patriots, Neville and Monroe form an uneasy alliance. As Rachel comes face to face with the nano-tech while searching for Aaron, things don’t go according to plan for Miles, Charlie and Gene when they try to steal the Patriots’ supply of mustard gas.

Tonight’s episode begins where we left off with Monroe holding a gun to Tom. He blames Monroe for his wife’s death because the patriots could not find him. Now he vows to take the patriots down. Tom tries to enlist Monroe to join him on his quest and he accepts. Tom asks about Miles but Monroe tells him he won’t do what needs to be done like they will.

At the train yard, employee Joe comes out to get water and turns to fine he is being held at gunpoint by Charlie and Miles. Miles tells him that Marion has said he is okay. Miles asks if he has seen the mustard gas location and he says that he does. Joe knows about more mustard gas than they even knew there was and he points out the area to them.

Marion goes to bring lunch to Truman. She is able to get some time alone in the office and begins digging. She is visibly upset when she finds proof that what she has been told about her fiancé is true. There are even more plans for destruction and Marion rushes to share the news with Miles. She was able to leave her fiancé without him knowing a thing. When she tells Miles what she saw, she is descriptive and tells him about a yellow cross and dates that were listed in the paperwork she went through. They begin to talk about a plan.

Marion comes back with the help she promised. Miles doesn’t seem to confident in the group he requested to help him steal the train that holds the mustard gas. The team who was brought to him that didn’t look so tough to Miles actually each have a story and an ax to grind with the patriots. He hopes their anger will bring them some strength to pull this off. Miles and Charlie go inside and still debate about the team Marion brought in to help. Despite Charlie’s lack of confidence, Miles decides to give them a try to do what a good guy would do. Marion shares that she does not want to go back. She doesn’t want to face her fiancé knowing what she now knows. Gene tells her she must go back or it will raise eyebrows and they cannot risk raising any suspicions right now.

Rachel is out walking around and hears loud music playing from the house where Priscilla is holed up. Aaron answers the door and is talking really funny. Rachel knows something is wrong and barges in past him despite him telling her to go. She looks around at the creepy scene as Aaron looks terrified. Priscilla walks out and welcomes Rachel to their home. Aaron tells Rachel that Priscilla is the nano. When Rachel says she does not understand, Aaron explains what this means and the fact that her body has been taken over. Priscilla gives a tour to Rachel and shows her the room of rats that she brought back to life. She explains that she wants to help Rachel as well. She offers to upgrade Rachel’s mind. Rachel tells the nano that she is her science project.

At the train yard, the plan to steal the train is coming to fruition with Joe in on it as their inside help. As they hijack the train pulling a conductor in to get it going, alarms begin going off and gunfire ensues after Truman sees a guard’s blood and realizes something is up. The train is being shot at and Miles tells Joe to get the train going. Charlie and Miles are returning the gunfire as the train slowly moved out. They are elated once they have escaped.

Later, Marion is presented with a necklace from Truman. She asks the occasion and he replies that the occasion is because of how happy she makes him and because he loves her. General Carver and the President are there to speak about the horrible things Miles and Monroe are doing and the crowd is believing and supporting them…except for Marion.

Once Miles and Charlie get off the train they took, they are met with gunpoint by Tom and Monroe who tell Miles they are stealing the train from them. Tom holds a gun to Charlie believing she had something to do with his wife’s death. Miles and Monroe try to talk him out of killing her. He ends up attempting to shoot Miles and Monroe knocks the gun away and the train is hot instead…revealing, however, that the mustard gas was not inside. They try to determine what they will do now. They are realizing the hidden plan that has been set for them as the goal seems to be mass destruction

Truman gives a speech and brings in the heavyweights as the crowd goes crazy. Marion is still shaken and watches her fiancé speak as she pretends to support him. Meanwhile, back at the house, Priscilla is angered as Rachel allowed one of her test subjects to escape. They bait her into a trap where her wet feet cause her to be electrocuted in an effort to kill the nano and bring back Priscilla. Aaron hates to see her on the ground unconscious. She wakes up and they softly ask her if she is the real Priscilla, to which the nano replies that something so basic would never work. She goes on to say that NOW she is really angry.

As the speech comes to and end, Marion sees Truman gives orders and follows his men to another area. In a back room she finds all the mustard gas…tanks upon tanks. Truman walks in behind her and tells her that he wished she hadn’t seen all this. He tells her he loves her, walks up to hug her, but stabs and kills her, leaving her to die on the ground. He takes back the necklace he gave her and puts it in his pocket as the wheels are put in motion to set off the mustard gas attack.

Next week is the series finale so be sure to meet us back here next week!