BY Annemarie LeBlanc on May 7, 2014 | Comments: one comment
Related : Recap, Revolution, Television 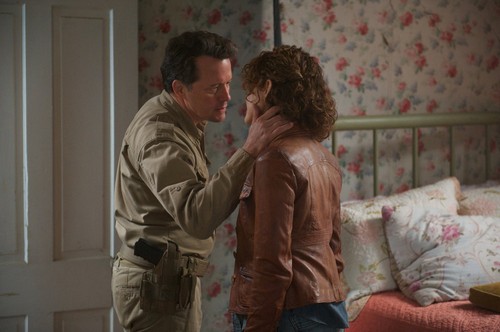 Tonight REVOLUTION returns to NBC with a whole new episode called, “Tomorrowland.” Miles and Monroe face mustard gas from Truman, so they prepare to fight at the same brutal level, much to Rachel’s chagrin. Meanwhile, Aaron fears the strength of the nanotech; and Neville deals with his own challenge from the Patriots.

On last week’s episode Miles fought for survival, Charlie confronted by Neiville in the aftermath of Jason’s death as Miles (Billy Burke), Monroe (David Lyons), Charlie (Tracy Spiridakos) and Connor (Mat Vairo) rushed to escape Austin, a confrontation with Texas Rangers separated Miles from the group. While out searching for Miles, Charlie was confronted by Neville (Giancarlo Esposito) who demanded information on Jason’s whereabouts. As a wounded Miles faced increasingly hopeless circumstances, Aaron (Zak Orth) learned that the nanotech has been busy. Also starred Elizabeth Mitchell, Maureen Sebastian and Tim Guinee.  Did you watch last week’s episode?  If you missed it we have a full and detailed recap, right here for you.

Truman gets permission from the president to launch a mustard gas attack designed to kill Miles and Monroe. It proves a step too far, however, prompting the two of them to team up in a bid to beat the enemy at their own game. Captain Neville has his own problem to deal with, while Aaron witnesses the full force of the nanotech’s power

Tonight’s episode begins with Truman walking in to speak with the President. The President explains how one of their biggest missions in Austin has failed after months of work and planning. Texas and California should be ripping each other to shreds already, but that is not happening because of Miles and Sebastian. He wants an explanation for why this would not fall on his shoulders. Though despite the threats from the Commander in Chief, Truman stays brazen and refuses to sit as asked, claiming he has had to sit too long as it is. He wants to be able to do his job. He refuses to take the blame, but then goes further and tells him if all of this fails, it is because of him, the President. The President gives him one more shot.

Charlie is calling for Miles as she looks around. All of a sudden, she sees a hand up through the grass and runs to it calling for her mom. Five days later, a train pulls in to the train yard. Truman is told by a man named Ike what he saw at the chemical plant and that he found a camp with several people. Truman thanks him for sharing the information. He tells Shaw to tell Cpt. Captain Neville that his services are no longer needed.

Aaron walks in on Priscilla and she shows him people who look happy in a magazine. He asks when he will get Priscilla back. Unmoved, she shares…when she is finished. Shortly after, hundreds of birds begin squawking and flying overhead as if signaling something is wrong. Priscilla warns Aaron to run. After a moment, he decides that is best after seeing the seriousness in her tone. Everyone begins running after they realize it is mustard gas that made the birds fly away and it is now encompassing the entire area around them. Miles tries to get everyone to safety. Aaron screams that he wants to go back for Priscilla but Miles cannot allow it. They get into a truck to hide and get away from the gas. They hear gunshots. Priscilla walks around with no mask no protection but seems to be in a haze.

After Truman arrives home, his fiancé is surprised and sees him putting things in a drawer. He leaves and tells her he will see her later. She snoops in the drawer and find a gas mask. Back at the camp, Rachel asks Pricilla how she knew the mustard gas was coming and she shares that she was able to smell it. They are sitting around the fire. Miles and Monroe decide to team up after losing 20 men in one day. Monroe is furious and proves his case to Miles. Miles agrees and says “I’m in.” Later, Miles tells Rachel just to get it out and get upset with him because he knows she is upset. She is upset and simply tells him she is done..there is no arguing about it.

Miles and Monroe head out into the night and Monroe apologizes about Rachel, saying he is sorry about what happened and that Rachel is a “sweet girl.” Miles inquires about how he will pull off his master plan. He says once he takes care of the Patriots, Georgia will be wide open..he says it is like the second coming. He wants to restore some sanity he says, but Miles is very skeptical.

Later, Aaron tells Rachel he is going to go look for some food after he sees Priscilla walking quickly by. Rachel calls out that she’ll go too, but Aaron takes off before she can get outside.

Just as Shaw thought he had Captain Neville by pointing a gun as his back was turned, Captain Neville played it off very well and was able to turn the tables. As he lies in pain after falling into a painful trap. Captain Neville starts questioning him and when he is not cooperative, Captain Neville steps onto his leg inflicting even more pain. Captain Neville keeps pushing…he wants to know about the safety of his wife because he knows that if they sent someone for him, someone is out after his wife. Captain Neville shares that he has lost everything he ever cared about. He regrets not listening to his son and says this will haunt him the rest of his days. He vows revenge and shoots Shaw in the head.

Marion is cornered at the gravesite of her father by Gene and Charlie who force her to come with them. Miles and Monroe blend in with gas masks and go unnoticed by the patriots in front of them until they turn toward them and are shot. Miles and Monroe pull the gas masks off of them and get ready for action.

Aaron goes looking for Priscilla and gets a scary surprise as behind a newspaper is dead man in a gas mask. He takes the mask off and just then Priscilla peacefully comes out and all the power comes on. She is eerily calm. She claims to know the problem with Miles. She says people are evil and they have a bad nature. She asks Aaron how nice it would be if they had the ability to change the way they are. She wants to make everyone happy. She giggles in a creepy way and tells him not to leave because they have a lot to talk about. Aaron is very scared.

Monroe realizes that he was set up and that Miles and Rachel are working together and did not break up. Miles traps Monroe and talks to Marion as she is brought in. She tells him about Truman using the mustard gas on them. She basically feels helpless and asks what he wants her to do. Miles tells her they need her and need to know what Truman is up to. She agrees. Monroe chastises Miles for tricking him. Miles tells him that they now have a spy. Monroe wanted to use the gas to take out a busload of patriots. Miles assures him that his plan is to win and he will win. He tells Monroe that they are the good guys and will not use the gas to kill innocent people. Monroe tells Miles that he is just sucking up to Rachel and that she is running him. Miles stand firm and tells Monroe that he will keep making mistakes because he has not changed. Miles leaves him with the words, “This time, we are going to do it my way.”

Rachel comes to talk to Miles and she asks about Monroe. Miles is indifferent about it. She asks what is going on with him. He shares a guitar pick from the 1960’s with her-very rare. He said he had one just like it the first time they met. He remembers the story and tells her about it. He tells her that out of all the things they’ve done, she should be cynical and hopeless but she is trying to build something better for Charlie. He cannot check out without trying to do the same. He tells her that she indirectly pulled him out of the hole when he was left bleeding because of the strength he got from thinking of her. She thanks him and they kiss.

Monroe goes to a secret stash of guns and immediately pulls one out as he sees his son with a knife to his neck held by Neville. Monroe tells Neville to kill him but to let his son go. Neville says he doesn’t want to kill him, because they have work to do.