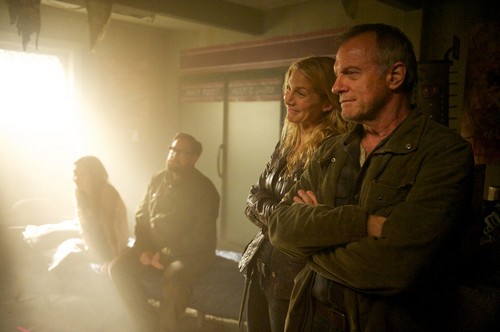 REVOLUTION returns to NBC with their season 2 finale episode called, “Declaration of Independence”. In the series finale, Miles’ crew plan an attack on the Patriots, but then they’re forced to improvise because of a war between other parties. Meanwhile, Neville goes after President Davis; and Aaron and Rachel try to save Priscilla.

On last week’s episode Miles and Monroe planned to fight dirty when the patriots changed tactics Truman (Steven Culp), empowered with new authority from the President, launchd a mustard gas attack designed to kill Miles (Billy Burke) and Monroe (David Lyons). To Rachel’s (Elizabeth Mitchell) disappointment, Miles agreed to join Monroe in a ruthless plot to beat the Patriots at their own game. As Neville (Giancarlo Esposito) faced his own challenge from the Patriots, Aaron (Zak Orth) grew increasingly alarmed by the power of the nanotech. Also starred Tracy Spiridakos, Stephen Collins, Mat Vairo, Reiko Aylesworth, Waleed Zuaiter, Cotter Smith, Maureen Sebastian, Billy Lush.   Did you watch last week’s episode?  If you missed it we have a full and detailed recap, right here for you.

Tonight’s finale episode is going to be great and you won’t want to miss it. So be sure to tune in for our live coverage of NBC’s Revolution tonight at 9 PM EST! While you wait for our recap, hit the comments and let us know what your think of Revolution season 2?

What was meant to be a season finale ended up being a series finale of the show, and tonight is the final episode of the second season and series.

Tonight’s episode begins where we left off with Priscilla waking up and very angry with Rachel and Aaron. Aaron begs her again to wake up. He is trying to break through. She keeps envisioning her former self. It seems she is trying ot break through. Aaron professes his love as she continues to have visions of her children calling to her. Another shock runs through her as she attempts to force herself to wake up. She falls to the floor and when she opens her eyes Aaron is there to hold her. She tells him she was with her girls and is upset for hurting him. She cries as she begins to realize what had happened. Rachel and Aaron are relieved as a tear runs down Priscilla’s face and she rests in Aaron’s arms on the floor.

Meanwhile, the President is just ending a speech to a crowd of applause. Shortly after, as children sing “My Country Tis of Thee” in the background, Miles, Charlie and his team take over. They move in quick, taking out several men in the process. While this is going on, Ed takes his men downstairs as if he needs to speak with them. He then shoots each of them one by one, followed by him shooting himself in the arm.

Later, the President moves forward with their Plan B as he delivers a speech to a crowd blaming Miles and Monroe for the tragedy that took place, even blaming them for his injury as well as Ed’s, which were actually both self-inflicted. He gets everyone outraged so he can ensure they are solidly against Miles, Monroe and their collaborators. He goes on to talk about Ed Truman’s loss of his fiancé…little do the people know that it was Truman who killed her! After, the crowd chants “USA!”

Gene feels guilty for suggesting Marion go back to Truman because he knows that she died at his hands. The group is all back and are listening intently to Monroe as he laments losing his child. He is hoping to get everyone riled up enough to go after the President. Miles vows to get revenge for Marion and Jason.

Neville sits and waits for his chance at killing the President. They wait for two hours for him to pass through on carriage. When they never arrive, Neville and crew go looking for him. They stumble upon a death scene that shows Miles and Monroe must have gotten to the location before him. Shortly after, a gun battle erupts as several troops move in on Miles, Monroe, and their team. Coming in on horses and on foot, many arte shot dead as they approach. Miles and Monroe gain something very significant…the President as their captive. Connor tries talking Monroe into killing the President. While he is conflicted about it since he thinks it is a good plan, he feels compelled to keep his promise to Miles. Monroe tells Connor that Miles trusted him and he cannot go back on his word. Connor gets very upset and tells him his word means nothing and he no longer trusts that he will be there for him. He leaves Monroe and ends up back with Neville looking around a shed with guns drawn. Just then, Monroe comes from behind and closes the door, locking them in. He takes off on horseback.

Monroe brings the President to the meeting spot as promised. When he arrives, Miles asks if there were any problems. Monroe replies, “None that I couldn’t handle.” Rachel thanks him, then turns to the President to have a private talk. She tells him they have a connection. He’s her boss’ boss she tells him. She calls him a disgrace to America and vows to make him pay. Just then the President’s soldiers arrive to save him. They break him free and the President asks Rachel if she really thought this plan would work. After a brief discussion, the President is ready to leave and instructs his men to shoot Miles and the gang. He gets caught after Miles exposes him, but he claims he was coerced by Miles. He is being led out and asks the group “Do you think this is over?” Then yells, “It is not over.” Frank helps the group and they successfully get the President locked up and is with them as they ensure the end of the Patriots’ treaty with Texas. After the victory, Charlie has a heart-to-heart with Miles. She tells him that he and Rachel should give it another shot. She knows they still love each other and wants to see them make it work. He is touched and obviously still has feelings for Rachel, knowing they belong together.

Priscilla begins telling Aaron more of what she saw as she was coming back to him. She tells him that she saw the nano and she knows what it was thinking. There were millions of people-they were mindless. She warns that if they don’t find it, it will find more people. Meanwhile, the nano does appear to have found new homes…as Marion, Jason, and are told to go to Bradbury, Idaho. The President, Neville, and Truman are all asked to follow the requests they are giving. They are taken in when seeing their dearly departed and head to The Wasteland, where thousands of zombie-like people are walking. Too bad when the finale was produced it was meant to leave us with a cliffhanger for the next season, as now we will never see a true conclusion to everything that has built up over the season.