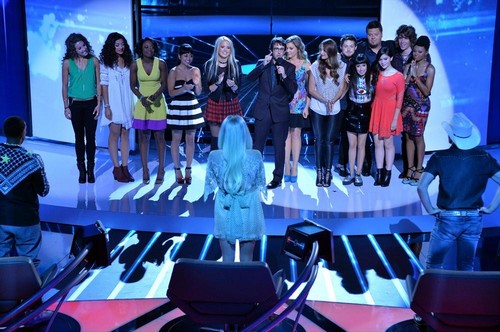 Tonight on ABC their singing competition RISING STAR airs and on tonight’s episode the quarterfinals take place and the remaining contestants move on step closer to winning the title of Rising Star.

On the last episode of Rising Star their expert panelist that consists of judges Brad Paisley, Josh Groban, Ludacris and Ke$ha; though the votes were based on the viewers, the panelist also influenced the vote. Guyanese singer Lisa Punch was knocked out from the top eight contestants who were going forward to the quarter finals.

On tonight’s show of the Rising Star, there are now eight competitors who are left competing against each other to become the Rising Star; the quarter finals take place.

Tonight’s Rising Star is going to be exciting, and you won’t want to miss it. So be sure to tune in for our live coverage of the show — tonight at 9 PM EST! While you wait for our recap, hit the comments and let us know how excited you are about this new show.

RECAP: First up tonight is Joshua Peavy singing “American Woman”, the crowd goes wild and Joshua got 71%, Kesha says that the song choice was awesome and loved his singing. Ludacris says that he did an amazing job and the fans at home loved it. Brad says it was a great song and he did a great job singing.

Next up is Dana Williams singing “Human” only got a 57%, Ludacris felt like that there was a lot of notes that were iffy; Kesha said she brought more power tonight and loved it.

Next up is April Lockhart singing a classic “Girls Just Want To Have Fun” she sadly only got 21%, Brad believes that she has a career but tonight he just wasn’t a big fan of it. Ludacris said that this was just a bad song choice for her tonight. Kesha said she loved her singing, but the song was a problem.

Next up is Maneepat Molloy singing “Your Song” She got over 46% and Kesha said she sang so perfectly, Brad said there wasn’t enough soul in it. Ludacris says that it just wasn’t what he wanted.

Audrey Kate Geiger is singing “New York State of Mind” got a massive 85%, Ludacris says he loved it and the song choice was perfect, Brad says that she is truly a star, Kesha says that it was a perfect rendition of the song.

Next up is Austin French and is singing “The House Of The Rising Sun” gets an amazing 89%, Brad never liked that song but loved Austin’s version. Kesha says she loves that song and his version was amazing. Ludacris says without a doubt one of the best tonight.

Next up is Shameia Crawford “Skyscraper”, Kesha loved the conviction in her eyes and felt the emotion in her singing. Ludacris believes she wants it the most. Brad says she should have been more dynamic, but other than that it was amazing.

Next up is Jesse Kinch singing “Money”, he got 88% Brad says that he had to show so much more, it was too cliche and wanted him to bring a little more with it. Kesha liked it and thought the song choice was actually good.