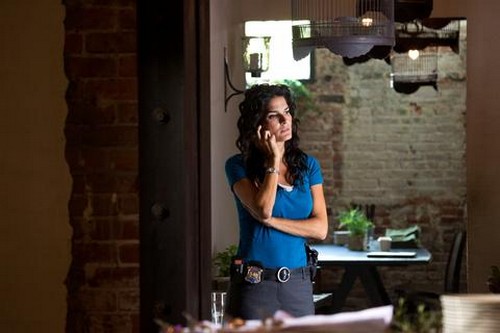 Tonight on TNT RIZZOLI & ISLES returns for the second show after a long hiatus with an episode called, “Food For Thought.”  On tonight’ episode Mysteries surround the death of a food-truck chef, with clues pointing to a poisoning. Meanwhile, Tommy makes a big announcement, and Maura’s birth mother tries to make amends with her daughter.  Did you watch last week’s episode?  We did and we recapped it right here for you.

On last week’s episode a singer and guitar player was brutally and mysteriously stabbed in a bar. As details emerged in the case, the squad soon realized that the victim had something to hide. Meanwhile, Jane’s dad (guest star Chaz Palminteri) returned after being gone for more than a year. And he’s got some shocking news.

Tonight’s episode starts with some light banter between a food truck owner, Chef Holden, and a couple friends from a local restaurant as they talk about the success of the food truck. The food truck chef suddenly seems to feel ill and is feeling crippling pain.

Cut to Maura and Jane, ting and watching Jane’s brother flirt with a young girl. They get the call about the food truck scene. Once they arrive Maura and Frost talk about how they recognize the truck and all the people around. Seems the group all appeared on a food-based reality show competition. Maura goes over to examine the body of Chef Holden and shortly after, she yells to Jane to get everyone back away from the body. Her nose begins to bleed. She advises them to call Hazmat. Hazmat crew is everywhere-and those people who ate food from the truck are being examined, while the food truck has several pieces taken from it for further examination. Rizzoli, Isles, and the gang all need a special shower because they were exposed to the toxin from the chef’s body. They have not identified it yet.

Maura arrives at the station and is told she has some packages waiting for her. She begins to pick up one of the packages to examine it and realizes how suspicious it seems after looking at the return address and the manner in which it is boxed up. She begins to realize it could be an explosive. Everyone is ordered out of the building while Isles holds the box still until the bomb squad arrives. Frankie offers to help her hold it still and tries to keep her mind off of the possible explosive in her hands by talking about the chef case. She tells him she feels it is odd that the chef, who likely has a good sense of smell, did not smell the toxins on his body. As they talk, the bomb squad carefully moves around them keeping the package still and trying to xray the contents. As they work, Maura sees the stickers and it begins to make sense. She ordered special coffee through Amazon. A third party was going to send it but it had been backordered for a while and she forgot. They learn the item that looked like a circuit board in the xray, was a coffee maker she ordered. They get the okay, open the package, and lots of coffee falls out.

Maura, fully protected in a special suit, is examining the chef’s body and determines the cause of death to be cardiac arrest and respiratory failure. She feels it is strange that his heart seemed to be healthy. A toxin used in insecticides is found on his skin. As Jane leaves, she and Frankie are in the elevator, she tells him how brave he was for staying with Maura. Jane tells him before walking off that he shouldn’t get involved with anyone he works with after discovering his crush on Maura seemed to have intensified.

Back at the station, the crew watch the food show’s finale with the chef to see the chef on the show. After a little more digging, they discover that the chef and his girlfriend broke up shortly after the win on the show and she was pretty bitter about it. Frost and Jane meet with the two friends the chef was talking with in the first scene. The woman was his ex-girlfriend but tells the detectives that although they broke up, they remained friends. They share that the chef changes his jacket several times a night while cooking because he insisted on having a clean jacket. Maura calls Jane and tells her that her suspicions were confirmed when she learned that the chef had no ability to smell. She found that he had a severed nerve that resulted in him losing his sense of smell…and taste. The ladies believe the ex-girlfriend must have been the taste tester for him since it is a necessity in the food industry to be able to taste what you’ve created.

Hope approaches Jane and tells her that she wants Jane to give a special necklace to Maura on her behalf. Jane berates her for what she did to Maura and how she treated her. Jane asks what she wants from Maura since the only time she comes around is when she wants something. She says she wants Maura’s forgiveness.

Jane and Frost meet with the ex-girlfriend and she denies any foul play or any involvement. They are told the only thing contaminated was the chef’s jacket. Back in the lab, Maura finds that the chef likely started using genetically modified saffron as they experiment and continue with their research.

At dinner, Frankie is uncomfortable when Jane watches as he says hello to Maura. He was on his way out and rushes to leave as they sit down with Tommy, who shares he is planning to propose to his girlfriend and shows off the ring. Jane tells Maura about the run in with Hope and she gets very upset. Jane reassures Maura that no one will think any less of her if she chooses to forgive or speak to Hope again.

Later, Maura and Frankie are alone and she tells him how embarrassed she was about the coffee/bomb scare. He tries to cheer her up. Jane and Frost get a lead and pay a visit to Shabazz Jones who has a history of fighting with food truck owenrs. As they arrive to question him, he is forcing a food truck out of the area, using force on a man. Jones tells them about his boss who may know something more. He insists he doesn’t know anything about Holden’s death.

Back at the station, Korsak and Rizzoli talk about the case as they watch the show to get more details. They find that Reed Bennett wanted to get rich and the only way he could do that was to off the Chef. He wanted to use cheaper products that the Chef objected to. Maura chimes in that car wax was also found on the chef’s jacket. They give Bennett, the other friend of the chef from the first scene. He was very jealous of his former partner and after they test his back seat for the insecticides found on the chef’s jacket and get a positive test, he begins to fess up to offing his buddy in an attempt to take over the business and make a lot more money than Holden ever did.

Hope shows up to see Maura. Hope is closing all of her clinics. She tells Maura she is doing it to gain her forgiveness. She wants a fresh start. She explains that she is changed and begs for a chance. They end on a peaceful note and Hope gets some “hope” of a potential reconciliation…or at least forgiveness.