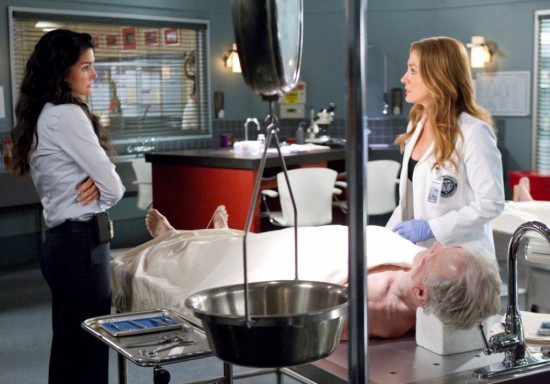 Tonight on TNT RIZZOLI & ISLES returns for its forth season finale called, “You’re Gonna Miss Me When I’m Gone.”  On tonight’ episode a senator’s daughter is murdered, leading to an investigation that could put national security at risk. Elsewhere, Tommy falls back into old habits, stirring up tension with Frankie; and Jane reveals stunning news.

On last week’s episode a singer and guitar player were brutally and mysteriously stabbed in a bar. As details emerged in the case, the squad soon realized that the victim had something to hide. Meanwhile, Jane’s dad (guest star Chaz Palminteri) returned after being gone for more than a year. And he’s got some shocking news.  Did you watch last week’s episode?  We did and we recapped it right here for you.

On tonight’s episode Homeland Security steps in when a senator’s daughter is found murdered. The squad rushes to solve the case, which could put national security at risk. Meanwhile, Tommy (guest star Colin Egglesfield) and Frankie get into a fight after Tommy starts slipping back into bad old habits. And Jane reveals some shocking news that could change her life forever.

Tonight’s episode begins with a senator’s daughter is picked up by her driver. After he takes an unknown path and then slows down she questions why he is stopping. She begins getting nervous and pulls out her laptop hoping her wi-fi will connect. Once the driver doesn’t answer, her suspicions are confirmed when he gets out of the driver seat. She attempts to use a tracking system on her laptop so that she’ll be found right before the driver pulls her out of the car and shoots her.

Meanwhile Rizzoli and Isles are having dinner with Jane’s family. Jane is wearing her ring again and she and Maura begin talking about marriage and kids when they are interrupted. Jane is told she is needed immediately and to bring Frankie as Frost is on vacation (sigh). Korsak, Jane, Maura, and Frankie are at the scene when they are told the young woman. 25, who was murdered is Senator Bloomfield’s daughter. Maura sees the gun was fired at close range. She also finds her tongue was cut out. After looking through her belongings left at the scene, they find she had 20 thousand dollars in cash on her that was not taken. The come to the conclusion she had something that must have been more valuable to someone. The team is briefed by homeland security and they are told that they will aid in the investigation. Jane is not thrilled by that she thinks they may hinder the investigation, but they don’t really give a choice. The Senator asked that a special medical examiner be flown in from California to work with Maura on the autopsy and will arrive tomorrow. She obliges but says she will be working on testing the clothing tonight.

Jane and Korsak speak with the Senator. They discuss her daughter, Natalie, and want to know more about her fiancé. Jane shares that they believe Natalie may have been trying to flee the country based on the tickets she had that indicated she was traveling beyond DC, which was where the Senator thought she was going. The Senator was in shock that her daughter had so much money on her as well and is adamant that there is no way her daughter would have been trying to leave the country.

Frankie looks for Jane but she is not back at the station yet, so he calls on Maura for help with Tommy who is at the bar drinking heavily. They go to try to pick him up and he is very drunk. He starts telling Frankie, in front of Maura, that he doesn’t have a chance with her. Frankie tries to keep him quiet and get him out of there when Tommy throws a punch and all hell breaks loose. Back at home the boys are still throwing verbal jabs at each other when Jane arrives and questions Tommy about falling off the wagon. He admits that he began drinking after he found out about his dad’s cancer. Olivia left him as a result and when asked where his son and Olivia went, Tommy replies that he doesn’t know.

Later, Jane and Maura are talking when Frankie arrives and tells them the news about the Senator’s daughter is out. Jane notices how Frankie and Maura interact and the way they look at each other and asks Maura what her intentions are…well, actually…she asks if Maura plans to see Frankie naked. Maura says she doesn’t want to discuss it with her at the moment and Jane finally seems to relent a bit and tells her not to mess with his heart if she does end up with him.

Frankie, Korsak, and Jane are denied once again by homeland security. They were unable to get the search warrant they wanted and now they are being blocked from performing the investigation. Jane baulks and they are able, at least, to meet with Natalie’s boss. They discuss that she had two laptops and the team is told that Natalie canceled the driver that was arranged for her. Because two laptops were stolen and because of the nature of the data within, they are told this is now a national security issue and they will likely not be able to go further with their investigation. Upon hearing this, Jane calls Maura and tells her not to wait for the medical examiner from LA and to begin the autopsy before they lose the chance to examine it.

Back at the station, they find Natalie called an 800 number that turns out to be a hotel. There is strong speculation Natalie was planning to sell intelligence. Just then the Senator gives a press conference and the team hears the Senator accuse Natalie’s boyfriend of being behind any intelligence being compromised.

In the lab, Maura shows Jane Natalie’s dental mold. They realize that Nataie must have been framed because her retainers were packed in her bag, but she hasn’t worn them for years, so she would not have packed them herself. They share this news with the Senator and she is relieved to know her daughter didn’t intend to betray her country. They get a search warrant, thanks to the Senator, to Natalie’s apartment. They find tools for making homemade tattoos. They notice a note she supposedly left for herself to deposit her check at the bank. Frankie, however, know she normally does direct deposit because he checked her bank records. They consider whether or not she has a safety deposit box and go to the bank. She has one and they open it to find a washcloth with blood and semen on it. It was from the hotel where her records show she stayed a few days. They believe she may have been raped while there.

Natalie’s boyfriend turns himself in and Jane, Korsak and Frankie meet with him and he begins to describe the weekend at the hotel. He says when he picked her up from the hotel she was different. She cried all the time and was very quiet, not her normal self. They notice his tattoo on his wrist. The same Natalie has. When the two images are put together and scanned, it opened a video Natalie recorded detailing the rape by her boss. She explains he had even raped others. Her boss says that while they may have had sex, it doesn’t prove he killed her. They also had the video she recorded just before her death where she gave instructions to track her and her boss’ phone. They were able to confirm the information in the video and place him at the scene. They arrest him.

In the last scene, Maura and Frankie get very close, but no kiss just yet. Then Jane drops a bombshell on Maura…she thinks she is pregnant. We’ll need to wait til next season begins, CDLers as this was the season finale.