BY Kristine Francis on June 17, 2014 | Comments: one comment
Related : Uncategorized 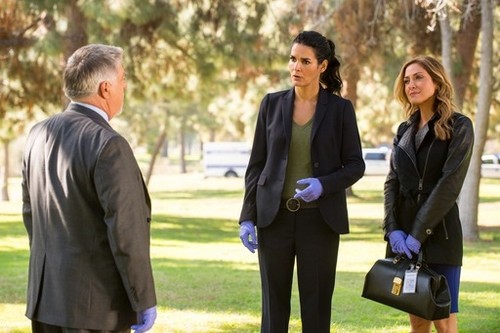 Tonight on TNT RIZZOLI & ISLES returns for its fifth season premiere called, “A New Day.”  On tonight’ episode Season 5 opens with the murder of a female jogger. Meanwhile, Jane tries to hide her pregnancy from her nosy mother, and Maura and Frankie face the fallout from their kiss.

On the last the last season finale Homeland Security stepped in when a senator’s daughter was found murdered. The squad rushed to solve the case, which could put national security at risk. Meanwhile, Tommy (guest star Colin Egglesfield) and Frankie got into a fight after Tommy started slipping back into bad old habits. And Jane revealed some shocking news that could change her life forever. Did you watch the last episode?  We did and we recapped it right here for you.

On tonight’s episode solving the murder of a jogger takes on even greater urgency when Jane realizes that the motive was theft… of the woman’s baby. As the investigation gets underway, Jane attempts to hide her pregnancy from her snooping mother, and Maura and Frankie face the aftermath of their kiss.

A woman named Susan Murphy was attacked while out on a jog. And Jane and Maura were put on her case.

When they arrive on the scene, they were immediately told it wasn’t a robbery. The victim had money on her persons and nothing appeared missing. But Korsak, the one who came up with that initial finding, was soon proved wrong. Something was stolen that night – the victim’s barely year old son, Brian. Someone killed his mother and took him.
Now everyone is simply hoping the baby is still alive!

Their victim was a habitual runner and so anyone looking to target her would have known that she frequently took her son running to calm him down for his bed time. The neighbors were all aware that baby Brian had colic and that his mother had to pacify him to get him to rest. And from all appearances, Susan was a great mother. She worked from home just to look after him herself and even though there’s been tension between her and her ex-husband the ex has also said Susan was a great mom.

At best, Raymond and Susan Murphy’s divorce was messy so reaching out to him was the detectives’ first priority. He could have been either their murdering kidnapper or he was going to be a very upset father. Though, luckily, he and his girlfriend had an alibi for last night. They were allegedly driving to visit his mother at her care facility, but they were unable to make the trip because of a massive pile up on the freeway.

Still, his EZ pass showed they were on the road. So the team had to look for other suspects and because Maura said the attack on Susan was so brutal that there could be a hint of sexual content involved – they looked at sex offenders within the nearby area. And to their surprise they found out that area around the park is populated with sex offenders. There’s even a registered pedophile living right across the street from the playground.

Korsak and Jane paid a visit to one of these men and while they were approaching the door – they heard a baby inside. But it proved to be a false alarm. Dave Robbins although a pedophile currently makes a living doing kid videos for their parents. So he’s constantly editing and snipping pieces together based off of his commission.

Though the baby they heard was in fact Brian. It seems his mother unwittingly hired this man to make a video of Brian’s special moments for the baby’s upcoming first birthday. And Dave, while creepy, was simply doing another job. Plus even if did develop an obsession – his alibi covers him for the murder of Susan Murphy.

But that didn’t stop Jane. She still wanted to keep looking at him as potential suspect and only let up after Maura told her that the autopsy revealed a woman killer. Yet, upon hearing that, Jane didn’t let the pedophile just go without asking just a few more questions. She wanted Dave to describe Brian’s mother and once he did she wanted him to identify Susan from an array of pictures. And the picture he ended up picking out was that of Caitlin’s, Ray’s girlfriend.

Looking again at Caitlin and Ray’s alibi, the detectives found a loophole Caitlin managed to worm her way through. Surveillance video from a nearby gas station revealed that Ray was in the car by himself the night his ex-wife was murdered. And, in case anyone is wondering, he did know about the plan because he covered for his girlfriend by using her cell phone during his little road trip. That way Caitlin’s phone would ping off of cell towers miles away from the park.

Caitlin truly loved Brian, but possibly a little too much. She had called Susan prior to her death telling her that Brian didn’t want to return to his mother after a visit one day with his dad. He’s not even one so how could Brian voice an opinion?!?!

Susan noticed the danger signs and so she told her ex that she would be seeking full custody of their son. And that’s when a plan was hatched. However, where is Brian now? Both Caitlin and Ray are in custody and Jane needed to know where they put the baby. So she grilled Ray and played on his paternal instinct.

She told him that Brian could be in danger without anyone looking out for him and that made his dad tell her they dropped Brian off at a church. But Brian wasn’t there went they looked and no one from the church says they saw the baby. The only way anyone could tell he was ever there is that someone took extra formula out of the church’s homeless center’s pantry.

Brian was found by a homeless woman who took him in and cared for him. Later when the detectives found her, they told her what a good job she did. She took better care of him than his own father did! Thankfully, Brian won’t have to be around that man anymore. His maternal aunt and her husband are taking him and before he left – Jane got a last squeeze in.

All along Jane Rizzoli’s worst fear was becoming her mother, but sometimes it’s best to learn to appreciate what you have. Angela knows her daughter like the back of her hand and without anyone telling her so – she knew about Jane’s pregnancy.

Jane was probably close to revealing her big secret when their squad was rocked with shocking news. Their beloved friend and fellow officer, Detective Barry Frost, was killed in a car accident. And anything after that seemed trivial. Not even Maura and Frankie’s kiss could mean anything once they knew about Frost.