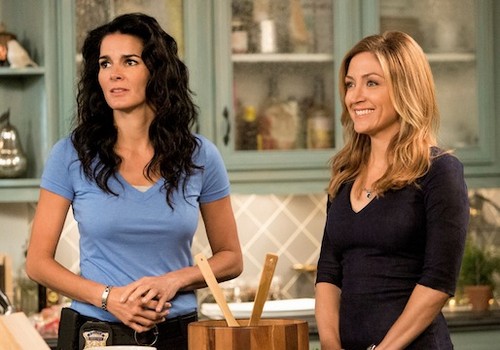 Tonight on TNT RIZZOLI & ISLES returns for another episode in its fifth season called, “The Best Laid Plans.” On tonight’s episode the murder of a wealthy woman with terminal cancer is investigated. Meanwhile, Maura teaches a class and meets a man, yet doubts in her scientific mind may not allow her to proceed with the potential romance.

On the last episode when a man was found murdered inside his supposedly impenetrable doomsday fallout shelter, the squad had to figure out how and why he was targeted. Jane found it difficult to focus on the case when she discovered Korsak was looking into retirement and Frankie was keeping a secret of his own. Did you watch the last episode? We recapped it all here for you.

On tonight’s episode the team investigates the murder of a wealthy woman with terminal cancer and only a few months left to live. And when Maura teaches a class, she meets a man who might be her Mr. Right (guest star Enver Gjokaj), but she is torn between the doubts of her scientific mind and the instincts of her heart.

Tonight’s episode of Rizzoli & Isles kicks off with Rizzoli investigating the murder of a wealthy woman and cancer patient named Chelsea Rothsberger.  The cause of death is a mystery, so Isles puts Chelsea’s heart in a fish tank full of water and removes the clamps from the artery.   Bubbles immediately start emerging from the heart, Isles announces there was air in her heart and someone injected her with a syringe to make it look like she died of natural causes.  Rizzoli is perplexed as to why someone would go to such lengths to kill a woman who was already on her death bed.
Detective Korsak gives Rizzoli a copy of Chelsea’s will, and she is shocked by how many zeros are in it.  She thinks that someone killed Chelsea because they are so desperate to get their hands on her money and couldn’t wait for her to die in hospice.  Rizzoli has her eye on Chelsea’s youngest son Kolter, a heroin addict who wasn’t allowed to touch any of his inheritance without being supervised.

Isles heads to the college to teach her forensic science class.  She meets another young professor named Jack, who helps her get logged in to the wifi.  After her first class he invites her out to get coffee with him on a date.

Detective Korsak brings Kolter in for questioning, and want to know if he stole her necklace that was missing.  Kolter insists that he has been sober for 74 days, he says he would never kill his mom for his inheritance, he doesn’t want the money because it would kill him being able to buy all of those drugs.

Detective Korsak receives a phone call from a pawn store afterwards and the say that they have Chelsea’s stolen necklace.  They fax a photo of the man who pawned it over to the police station, and it was actually Chelsea’s older and responsible son Larry jr.
Rizzoli and Korsak bring Larry Jr. in for questioning.  Rizzoli explains that they know he pawned the necklace and his company is going down the tubes, Larry Jr. insists that he was home reading the night that his mom was killed.  Then, he lawyers up and refuses to ask any more questions.

Rizzoli walks in to Isle’s office and catches her talking in to a hairbrush and practicing her next lecture at school.  Rizzoli sees right through her façade, and screams “you met a guy!”  Isles confesses that she met Jack and she likes him, and keeps picturing herself having sex with him, but she knows it isn’t going to work out.

The Rothsberger maid Polly shows up at the police station and insists that she can prove that Larry didn’t kill his mom Chelsea. Polly confesses to Frankie and Jane that she is the one who killed Chelsea. She claimed that she helped Chelsea commit suicide and she injected her IV with morphine, because she wanted to die. Jane and Frankie take Polly’s confession to Isles. Maura confirmed that someone injected morphine in to Chelsea’s saline bag, but the morphine never made it to her heart because when Polly injected it Chelsea was already dead. Someone murdered her by stabbing her in the heart with a needle, before Polly helped her commit suicide.

Jane has a new theory, she thinks it wasn’t about the money. She thinks someone found out about her plan to have Polly help her commit suicide, and they didn’t want her to die peacefully via morphine. So, they stabbed her in the heart with a syringe and pumped air in to her heart so she had a painful and traumatic death.

Jane and Frankie head back to the drawing board and decide to take a closer look at the Rothsberger chauffeur Brad Oscoff, who bears an uncanny resemblance to Chelsea’s late husband Larry Sr. Jane thinks that if Brad was a Rothsberger by blood and was forced to work as the help, then he most likely had a serious grudge against Chelsea.

Rizzoli and Korsak question Brad in the interrogation room, and reveal that they know he is Larry Rothberger’s son. Brad says that Chelsea wanted forgiveness and kept trying to buy him off for all the years that she wouldn’t let Larry Sr. be a part of his life. When he found out that she was planning on killing herself, he wanted her to suffer, not “peacefully go to sleep.”

Jane heads home and relaxes on the couch with her mom, her mom warns her that when she is in the second trimester of her pregnancy she will want to sleep with every man she meets, it’s called “pregnancy goggles.” Isles returns home from her date with Jack, and Jane explains that she and her mom are working on their boundaries.