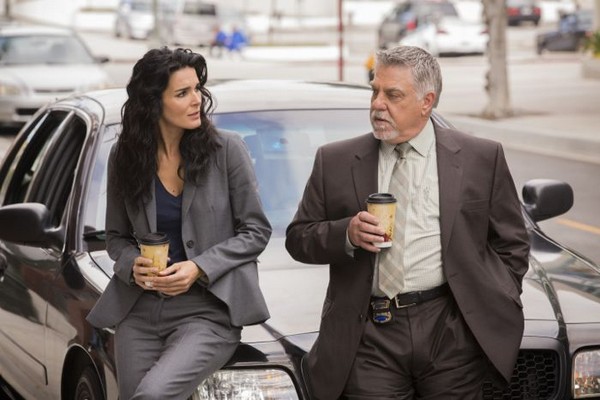 Tonight on TNT RIZZOLI & ISLES returns for another episode in its fifth season called, “Knockout.” On tonight’s episode Jane tries to solve the perfect murder. But with Maura away at a convention, Jane turns to Susie for help to crack the case. Elsewhere, Korsak faces painful unfinished business when he’s visited by an old friend’s son.

On the last episode the team investigated the murder of a wealthy woman with terminal cancer and had only a few months left to live. And when Maura taught a class, she met a man who might be her Mr. Right (guest star Enver Gjokaj), but she was torn between the doubts of her scientific mind and the instincts of her heart. Did you watch the last episode? If you missed it we have a full and detailed recap, right here for you.

On tonight’s episode with Maura at a Medical Examiner’s convention, Jane needs Susie’s (guest star Tina Huang) help and crime scene dioramas to solve the perfect murder. Meanwhile, Korsak is visited by the son of an old friend and forced to deal with painful unfinished business.

Tonight’s episode of Rizzoli and Isles begins with a woman boxing in her living-room, and someone walks in behind her in a hazmat suit and stabs her in the back with a knife.

At Jane’s, Maura is preparing to leave for a convention and is making sure Jane has all of her pregnancy vitamins. She is disappointed because she knows that the convention she is going to is way more fun than the one that she hosted. While Maura is getting in her cab, Jane receives a phone call alerting her that there has been a homicide.

Vince, Frankie, and Jane arrive at the woman’s house that was stabbed in the back while she was working out. The victim’s name is Judith, Jane and Vince head to Judith’s husband’s dentist office. Alan says that he has been at his office since 6:00 in the AM, but his receptionist didn’t arrive until 8:00. Alan says that Judith lost 100 pounds in the last year and she didn’t know how to handle all of the attention that she has gotten from men, and he was afraid that something like this might happen to her. Ever since she lost weight, the mailman, waiters, and strangers at the super market were all fawning over her. The only person who was expected at the house was their handyman, Luis Benitos. And, the knife that was used to stab Judith had the initials “LB” on it.

Someone left a package for Vince at the station, it’s a CD of Bobby Savanski singing, he is the grandson of a friend of Vince’s. He is playing in Boston and he wants Vince to come play with him since he used to play in his grandpa’s band.

Frankie calls Jane from an alley in the middle of the night, they put an APB out on Luis’s car and they spotted him. Frankie tries to take Luis in to custody, but he tries to run, after a brief chase Frankie manages to bring him in. Jane and Vince bring Luis in for questioning. He says that he showed up for work and found Judith dead on the floor and he panicked and ran. He says that he doesn’t know where his knife is, it is missing. Luis insists that he is a changed man since he got out of prison and he never would have hurt Judith. He says Judith inspired him, because she had changed too.

Jane pays Maura’s substitute medical examiner Suzie a visit. Suzie reveals that the killer was wearing a hazmat suit and that is why there wasn’t any forensic evidence. She also says that the killer was much taller than Luis Benitos. Jane heads back in to question Luis and gives her a new lead, he says that Jane spent a lot of time with her boxing trainer Mickey.

Frankie and Jane pay Mickey a visit at the gym. Mickey insists that he wasn’t having an affair with Judith, and reveals he is gay. He says that Judith’s husband Alan never paid any attention to her, and he spent every weekend at his fishing cabin and left Judith home alone.

They head to Alan’s fishing cabins and find no traces of any other person being there with Alan. All they find is his dentist tools and watermelons that Alan was using for target practice. They bring the watermelons back to the crime lab and Suzie says that they were shot with a 22 caliber gun.

Angela finds Vince at the coffee shop looking through old pictures and reminiscing about when he was in a band with Bobby’s grandpa. Apparently Vince blames himself for Bobby’s grandpa’s death and that’s the reason he doesn’t want to play with Bobby.

Suzie completes her autopsy on the watermelons and reveals that one of them was shot, but the other ones were full of dental plaster. Jane jumps to the conclusion that Alan was trying to make a bullet that wouldn’t be detected in an autopsy.

Jane video chats with Maura and shares her theory, Alan made bullets out of dental plaster. They think that Alan shot Judith first with a dental plaster bullet, and then stabbed her in the back. Because his wife was boxing every day, there was no way that he could sneak up on her without her kicking his ass. Suzie and Maura go back over the autopsy and realize that Alan stabbed her where he shot her, to cover up the bullet wound.

Vince and Jane bring Alan in for questioning. When he realizes he is now a suspect in his wife’s murder, Alan marches out of the questioning room and says that they have a theory and no evidence, and they will never find any.

Jane and Vince go back to the drawing board. Jane realizes that the only place that Alan could have hidden the gun on his way to the dentist office was in the post box. They call his courier service and find out he is supposed to be receiving a package, they head to his house and find him signing for the package. Jane snatches the package out of his hands and opens it, it’s the gun he used to kill his wife, which he mailed back to himself. They arrest Alan for the murder of his wife Judith, and the case is closed.