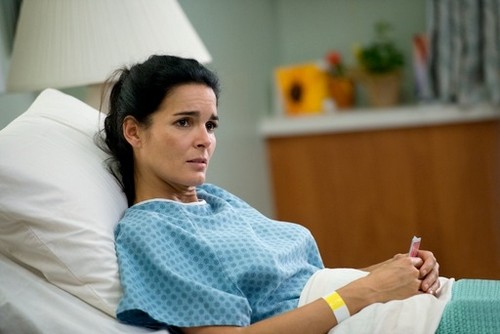 Tonight on TNT RIZZOLI & ISLES returns for another episode in its fifth season called, “It Takes a Village.” On tonight’s episode a woman’s mummified remains are found in a case that tests the team’s investigative prowess. Jane works from the hospital as she tries to overcome a loss.

On the last episode the team raced against time to find a young witness to the contract killing of a woman outside of a nightclub. Ultimately, Jane put herself in the line of fire to save this witness’ life. Did you watch the last episode? If you missed it we have a full and detailed recap, right here for you.

On tonight’s episode mummified remains of a woman put the team’s investigative skills to the test. Jane works from her hospital room as she, with Maura’s and her family’s support, seeks to recover from a devastating loss.

Tonight’s episode of Rizzoli & Isles begins with a man putting up a Foreclosure sign in a house’s yard. After wards he heads in the house with a video camera and documents the state of the house, he heads in to the basement where there is a foul odor and no electricity. He takes out a flashlight to investigate the basement, and finds a dead woman sitting in a chair, her face is decaying.

Jane wakes up in a hospital bed and Maura is sitting by her side. Maura assures her that the girl she saved lived, and warns her not to move because her kidneys and spleen are bruised. Jane asks about the baby, and Maura breaks the news to her that she lost it. Maura’s phone rings and she learns that there has been a body discovered. She tells whoever is on the other end to collect the vitals without her and she will be there as soon as she can.

Later Jane’s mom arrives at the hospital, with a life-size stuffed panda. Jane tries to pretend she is sleeping and can’t talk, but her mom insists she plays gin rummy with her. Angela tells Jane that she knows how she feels, and confesses that she had a miscarriage before Jane was born. She thinks that Jane should talk about it with someone, but Jane says she isn’t ready to talk about it.

Maura and Korsak arrive at the basement, and find the woman in the chair. Maura is excited about how perfectly preserved the body is. She thinks it is like what Egyptians did with their dead. Korsak thinks that she might have died from natural causes. But, Maura says that is not the case, their victim was poisoned.

Frankie stops by the hospital and fills Jane in on their case. He says that their victim, Fran Clarke actually died four and a half years ago, but no one noticed because all of her bills are on auto-pay, her lights are on timers, and she was estranged from her family. He brought a recording from Fran’s answering machine, her step-father left her messages letting her know that her mom passed away. Maura arrives and says that she knows what poison Fran died from…poison hemlock.

Korsak brings Howard in for questioning. Howard says that Fran is mean and broke his wife’s heart. He says that she was a contractor and wrote computer codes for banks. Korsak asks if Fran was capable of taking their life, and Howard says “maybe.”

Jane pays Tasha, the girl she saved, a visit and brings her the huge teddy bear that her mom brought her. Jane tells her that she just wanted to let her know that they got the guys that was after her and she is safe now. The nurse interrupts and tells Jane that visiting hours are over, as Jane is leaving Tasha thanks her for helping her.

Korsak and Frankie bring in Fran’s gardener for questioning, they found his fingerprints on her computer. He confesses that he knew Fran was dead in the basement, but he needed a place to stay so he didn’t report it. He went on to her computer to give himself a raise since he had been doing such a great job taking care of her house after she died. Korsak and Frankie are sure he isn’t Fran’s killer.

At the hospital Jane learns from a social worker that Tasha will be released in ten days and will have to go in to a group home because she has no family. She pays Tasha a visit and Tasha tells her that if they put her back in a group home she will run away.

They manage to hack in to Fran’s cell phone at the police station and they find a video she saved of a guy threatening her, he tells her that if she doesn’t take the firewalls down that she put up, he will kill her. They are able to track down the guy from the video and bring him in for questioning, his name is Bill. He explains that he didn’t really mean he would kill her. He says that they build a program together and go in to a fight over it, they worked out a royalty program and she was sending him notes. After a while the notes stopped coming, so he went to her house and found her dead body. He called the police and left an anonymous tip that she was dead in the basement but nothing ever happened. Bill says that Fran didn’t need his money though, because she had an inheritance. After some investigating they learn that Fran’s Dad died seven years ago and he left her a million dollars. They track her account to Grand Cayman Bank and learn that she still has $878,000.00 in her account.

At the hospital Jane learns that Tasha has ran away. The nurse reassures her that there are people looking for her and they will find her soon. Jane sees security cameras in the hospital and runs down to the basement, she finds Tasha sitting down there wrapped in a blanket. Jane reassures her that she isn’t going to let her down, and asks Tasha to trust her.

Frankie is frustrated, he can’t find anyone who even knew about Fran’s inheritance, and would kill her for it. Korsak has a lead though, there was something suspicious about Fran’s mom’s death, she had Stage IV lung cancer and went in to remission. Everyone thought she had recovered, but she died unexpectedly two days later. They realize that Fran’s step-father Howard killed her mother first.

Jane walks Tasha up to her hospital room and then makes a phone call to Tasha’s social worker. She asks her what needs to be done to become a foster parent.

Maura, Frankie, and Korsak all have pizza in Jane’s room and fill her in on their case so far. Jane says that she has an idea. Korsak and Frankie lie to Howard and tell him that they think Fran killed herself. They tell him that a rep from Cayman Bank will contact him, they will want to hold their own investigation before they transfer Jane’s funds to him.

Jane is released from the hospital, Nurse Gwyn and Jane stop by Tasha’s room and inform her that Gwyn is going to be her new foster mother so that she doesn’t need to go in to a group home, Tasha is thrilled.

Howard sneaks in to Fran’s house and tries to hide poison under her sink to prove that she killed herself so he can get the money sooner from the Cayman Islands, the only problem is Frankie and Korsak are sitting in the dark waiting for him and catch him red-handed. Now they can officially arrest him for the murder of Fran Clarke.