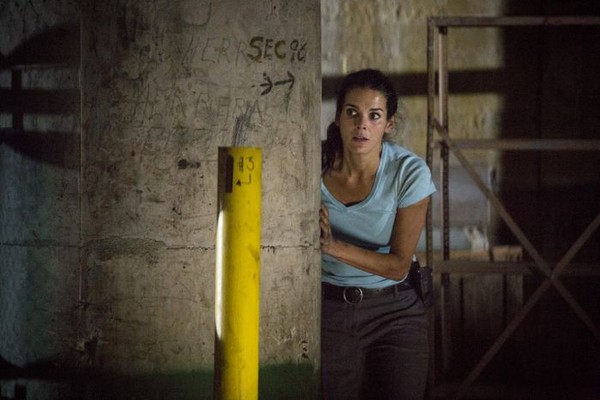 Tonight on TNT RIZZOLI & ISLES returns for another episode in its fifth season called, “Lost & Found.” On tonight’s episode the contract killing of a woman outside a nightclub triggers the team’s desperate efforts to find and protect a young witness to the crime.

On the last episode the murder of a rare bookseller brought Jane and Maura into the world of Keltic writings and coded confessions, just as Maura was preparing Jane to meet her new man. Angela’s relationship with Cavanaugh changed pace. Did you watch the last episode? If you missed it we have a full and detailed recap, right here for you.

On tonight’s episode the team races against time to find a young witness to the contract killing of a woman outside of a nightclub. Ultimately, Jane puts herself in the line of fire to save this witness’ life.

Tonight’s episode of Rizzoli & Isles begins with a woman at a bar. She steps outside to smoke a cigarette and a man offers her a lighter, he warns her that smoking is a bad habit. Then he shoots her three times with a pistol with a silencer on it. Meanwhile Jane and Maura are out to dinner with Maura’s new boyfriend, and is panicking that Jane doesn’t like him.

The next morning Jane and Maura head to the crime scene of the woman that was shot outside of the bar, her name is Sydney Allen. Jane thinks it is just a robbery. Vince says that she is married to a man named Judson, a CEO of a start-up company.

Jane heads back to the station and Frankie fills her in on Judson. He called him to tell him about his wife’s death and he didn’t return his call. He checked Judson’s credit card records and found out that last night after the shooting he checked in to a hotel. Jane and Vince head to the hotel, and when they arrive there is a bullet hole in his door. They open the door and find Judson dead on the floor. The shooter shot him in the eye through the door while he was checking the peep-hole. Maura arrives at the scene and is certain that Judson’s bullet wound matches his wife’s.

Frankie meets a new detective at the station named Nina. She fills him in on Judson’s company and says he was about to “hit the mother lode.” An 8 figure investor arrived in Boston the same night Judson and Sydney were murdered and checked in to the Merrimac hotel, the same hotel where Judson was staying.

Vince reports back to the station and tells Jane that he thinks it was a professional hit-man. Jane receives a gift from Maura’s new boyfriend, it’s an autographed baseball from her favorite player. She thinks he is a keeper. Judson’s right-hand man Harper arrives at the station for questioning. He reveals to Vince that now that Judson is dead, the company will have to shut down. They don’t have a dime to their name since he was murdered before the investor signed on the dotted line. Harper also reveals that Judson hated his wife Sydney and he wanted a divorce because she was a gold-digger.

Frankie introduces Jane to Nina and reveals that they found three $10,000.00 cash withdrawls out of Judson’s bank account in the last few weeks. They play back a 911 call from the bar where Sydney was shot. They realize that the girl that called in to 911 was in the alley when Sydney was shot, so she probably seen the killer. And, if they don’t find her soon the hit man will probably kill her to cover his tracks.

Vince and Jane head back to the alley where Sydney was shot outside of the bar, they find a door in the alley that has been kicked in and head inside to investigate, it leads to the basement of the bar that Sydney was in. After looking around they find a sleeping bag and homework from a high-school, and realize that whoever witnessed the shooting is just a kid.

Jane spills coffee on her Grover Verben signed baseball that Jack gave to her. She begs her mom to take it home and get the stain out of it. Only, her Mom accidentally cleans off half of her autograph. Maura heads home and sees that Jane ruined the baseball.

Frankie gets a name from the kid in the basement’s text books, Tasha Morris. Jane and Vince head to the high-school, but the secretary says that they have no phone number on file for her and she thinks she is homeless. Jane shows the secretary a picture they got of the hitmen off the hotel security camera. The secretary confirms that the man in the picture came to the school that morning looking for Tasha.

Jane is worried about Tasha, and they know that the hit man is looking for her. They run a check on her and find out that both her parents are dead and she receives a social security check every month. They decide to all spread out and check out all the local check cashing offices near the basement where Tasha was living. Jane finds a teller that recognizes Tasha’s picture, he lets her look at the security camera and she is able to pull a partial address from her social security check.

She heads to the address and calls Vince to tell him where she is but her cell phone has no service. She straps on her bulletproof vest and heads in to the building to look for Tasha. The building appears abandoned and the doors are locked. She finds an unlocked door and walks in to the building calling out for Tasha. When she walks out Tasha runs behind her and locks the door. Jane yells through the door to Tasha that she is a witness and she is in danger, she manages to coax her to unlock the door.

Jane finds something in the elevator and ties a tourniquet around Tasha’s wound and then takes her phone out, she doesn’t have any service though. She sits down with Tasha and tells her that she shouldn’t worry, her team will find them soon. Jane manages to hot wire the emergency phone in the elevator and tells the operator to call in to 911. Frankie, Nina, and Vince are already en route when they receive the 911 call. Jane tells the operator to patch her through to Maura, but Maura is talking to Jack and ignores the call. She finally answers and realizes it is Jane, she rushes to the scene. Jane describes Tasha’s injuries to Maura on the phone, and Maura warns her that she is going to go in to shock and she has to keep her awake. Jane puts Tasha on the phone while she tries to wedge open the elevator door. Jane climbs out of the elevator to get Tasha help. She closes the elevator door behind her while Tasha talks to Maura on the phone and tells her that she wants to be a doctor when she grows up.

The hitman goes in the basement and uses the emergency fire button to turn the elevator back on, Jane hears the elevator going down to the basement with Tasha still in it. She staggers down the stairs and tries to get to the basement. Meanwhile Tasha passes out. All of the police officers arrive outside of the abandoned building. Vince finds Tasha’s blood and Jane’s gun in front of the door. They see the elevator light doing down and rush to the basement. Jane is already in the basement and pulls the switch on the electric box and turns the lights off. The hit man is in the basement with her, he attacks her with a crow bar and Frankie shoots him. Maura and Frankie load Jane in to the ambulance and tell her that the EMT’s are working on Tasha. Tasha wheels by on her stretcher and she and Jane share a look before they head to the hospital.