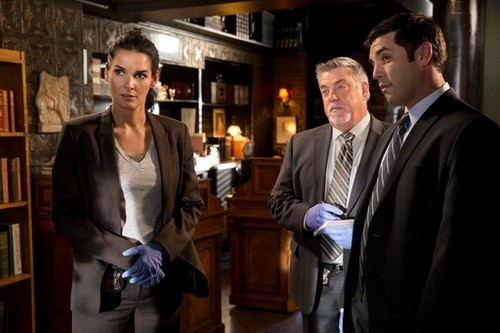 Tonight on TNT RIZZOLI & ISLES returns for another episode in its fifth season called, “Boston Keltic.” On tonight’s episode a seller of rare books is murdered, drawing Jane and Maura into a realm of Celtic writings and coded confessions. Meanwhile, Angela’s relationship with Cavanaugh begins to change.

On the last episode with Maura at a Medical Examiner’s convention, Jane needed Susie’s (guest star Tina Huang) help and crime scene dioramas to solve the perfect murder. Meanwhile, Korsak was visited by the son of an old friend and forced to deal with painful unfinished business. Did you watch the last episode? If you missed it we have a full and detailed recap, right here for you.

On tonight’s episode the murder of a rare bookseller brings Jane and Maura into the world of Keltic writings and coded confessions, just as Maura is preparing Jane to meet her new man. Angela’s relationship with Cavanaugh changes pace.

Tonight’s episode of Rizzoli and Isles begins with Maura stressing over her date with the professor she met, Jane gives her a pep talk and orders her not to talk about work. Maura argues that the human body is fascinating, and Jane tells her she should talk about puppies…the outsides of puppies, not their internal organs.

Maura and Jane head to a crime scene, an elderly man named Brendan McHale was murdered in his office, he was a rare books dealer. They find all of his fingers are broken, and a frozen ice pack. They assume that the killer was using ice to keep him awake while they were torturing him. They question his employee Ricky, and ask him if he has an alibi or if he knows what Brendan keeps in the safe. Brendan doesn’t know about the safe and doesn’t have an alibi.

Back at the station Marua does an autopsy and reveals that Brendan died from shock, the killer thought that Brendan was just passed out because they tried to revive him by slapping him. Vince barges in and interrupts, the cop that was guarding the murder scene was attacked and some one broke in to Brendan’s office.

Jane and Vince head back to the crime scene and nothing is missing, but it looks like someone tried to break in to Brendan’s safe. Vince says that he will have two cops guard the crime scene over night.

Vince heads back to the station the next morning and Frankie did a background check on Brendan’s employee Ricky. He was arrested two weeks ago for trying to sell a rare page out of one of Brendan’s books. But, Brendan refused to press charges.

They bring Ricky in for questioning and he reveals to Jane and Vince that Brendan knew he was selling some of his rare books, and he was doing it to keep the lights on at the store. According to Ricky about six months ago, Brendan changed, and stopped caring about anything and started going to church.

Maura calls Frankie down to the medical examiner’s room, she was able to pull some fingerprints from the crime scene. They run the prints through the database, and learn that they belong to en ex-con named Donald Maxwell.

Jane and Vince head to the crime scene and have a locksmith come open the safe. When they finally crack the safe, it is empty. But, Jane discovers a loose base board behind the safe. She pries the board off and finds a dusty old book with a letter in it addressed to “Father Cowens.”

Vince brings Father Cowers in to question him, the note in the book says “thanks.” Cowers informs him that Brendan told him if anything ever happened to Brendan he was supposed to go pick up the book and take it to a man named Professor McTavish. Maura says McTavish is an expert on books from the middle ages, strangely the book they found in the wall is form the 19th century.

Frankie brings Donald Maxwell in for questioning, and tells him that they have his fingerprints at the murder scene. Maxwell is less than cooperative, and refuses to even talk to Frankie.

Jane heads to the ME room and Maura has literally taken the book apart page by page. She reveals to Jane that the book is counterfeit, it’s a knock-off. Brendan McHale made it about a year ago judging by the age of the glue in the spine. Jane is perplexed, she doesn’t understand why someone would die to hide a book that wasn’t worth anything.

Brendan shows up at the police station and asks Jane is he is allowed back at the book store yet because he wants to fix it up. He doesn’t know what to do with himself not that Brendan is gone. He asks Jane if she knows why Brendan was killed, and she says once she does she will let him know.

McTavish comes to the ME office to look at Brendan’s book. He says that Maura is correct and the book is definitely a fake. He wants to take the book back to his office to investigate it further, but Frankie tells him it can’t leave their possession. McTavish leaves, but is irritated he can’t take the book with him.

Donald Maxwell lawyers up and Jane is shocked to see who his lawyer is. She realizes that Brendan’s murder might be mob related. They have to release Maxwell, but Frankie and Vince follow him from the station to a house on the South Side. They enter the house and find a man that was waiting for Maxwell, they bring him in to custody.

Maura has a break through with Brendan’s book. She realizes that the riddle isn’t in the book, but on the book. She shows Jane and Jane is shocked, she says, “He was involved in a bombing that killed two people?”

Jane and Maura bring in Irish crime specialist Gillian, and she knows exactly what bombing Brendan was referring to and it has been an unsolved IRA case for years, two soldiers died in the bombing. According to wiretaps, Brendan was preparing to confess after all of these years, so his co-conspirators must have gotten to him first to stop the confession. But, Brendan hid the book as an insurance policy to make sure the truth got out. The case is solved, Jane heads to the waiting room to tell Ricky why his boss was murdered.