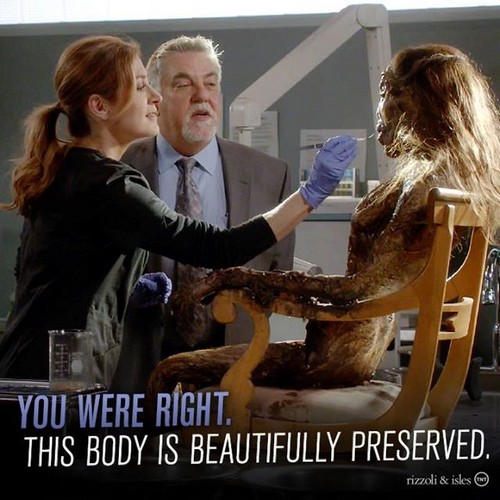 Tonight on TNT RIZZOLI & ISLES returns for another episode in its fifth season called, “Phoenix Rising.” On tonight’s episode the team joins forces with Korsak in a bid to crack a cold case. Jane, still unable to return to duty, takes unconventional measures to stay involved.

On the last episode mummified remains of a woman put the team’s investigative skills to the test. Jane worked from her hospital room as she, with Maura’s and her family’s support, seek to recover from a devastating loss. Did you watch the last episode? If you missed it we have a full and detailed recap, right here for you.

On tonight’s episode the team helps Korsak investigate an old case that has gone very, very cold. Jane refuses to believe that she’s not ready to go back on duty and takes some untraditional steps to stay involved.

Tonight’s episode of Rizzoli and Isles begins with someone dousing a house with gasoline and lighting it on fire.

Maura and Jane are waiting in the house for Jane’s mom to arrive. Jane is going crazy because she wants to see if her mom has a letter for her clearing her to go back to work. Jane’s mom finally arrives, and Jane rummages through the mail and is frustrated because there is not letter from her doctor. Her mom tells her to lie down, and offers to make her a snack. Jane begs Maura to put her in to a medically induced coma before she leaves her home alone with her mom.

Vince pays his friend Rick a visit in jail. He says he is dying and he will only live for six more months. He begs Vince to prove that he didn’t kill his family in the fire, so that he doesn’t die with his son thinking he is a killer. His son has refused to see him since he went to prison. He swears to Vince that he didn’t set the fire. Vince tells him to write another letter, and promises he will find his son Jason and hand deliver it to him. Rick isn’t satisfied though, he begs Vince to look at his case one last time, Vince caves and says he will.

Later Jane is venting to Maura about her mom, and Vince arrives on the door step with a box of files. He says the case is 15 years old, but he wants Maura to take another look at it. Rick went to jail for lighting his house on fire, which killed his wife and daughter. Maura agrees to take another look at it. Jane tries to read the file but Vince tells her she can’t because she hasn’t been released. Jane steals one of the files when Vince isn’t looking, and says she is going to bed.

Vince heads to the office and asks Frankie to help him go over Rick’s case. Frankie went through the interviews, and says that over five days, Vince never changed his story. He says he blacked out from drinking and woke up in the back yard coughing up smoke. Vince receives a phone call from Maura and leaves Frankie to work.

At home, Jane is reading over the case files that she stole from Vince when he wasn’t looking. Her mom offers to take her out to lunch to get a sandwich, but Jane ignores her. She lies and says she is reading a magazine about how to “please her man.”

Maura meets with Vince, and says that there was an problem with the autopsy report. She says that the fire in the house was too hot to be caused by just the acetone that was found on Rick’s clothes. The problem is the DA’s smoking gun was that Rick had acetone on his pants and that was used to start the fire. But, it turns out that the acetone might not be what caused the fire. Maura heads back to the office and creates a fire-simulator of the Sullivan house. The flame temperature from acetone doesn’t generate over 390 degrees, so it isn’t what killed Rick’s wife and daughter.

Jane calls Frankie, and tells him to find Ricks wife Tanya’s boyfriend because he never was cleared as a suspect. He is confused how Jane knows anything about the case, but she hangs up on him and rushes back to the couch because her mom returns home.

Maura calls Vince down to the lab and says that the chemist found acetone and a solvent toluene. The DA was wrong and there was more than one thing that caused the fire. It would have been possible for Rick to get splattered with acetone and not the second chemical, toluene.

Vince tries to get the evidence out of filing so that he can test Rick’s pants for toluene, however he hits a road block when the officer on duty informs him he has to go get signatures from the DA on the case before he can have the evidence.

Maura and Jane are at home making dinner and Maura receives a call from Vince. The DA won’t give him permission to get the evidence. Jane tells Vince and Maura that they need to track down Tanya’s boyfriend Sal. Vince and Frankie track down Tanya’s boyfriend Sal, and supposedly a witness overheard Sal threatening Tanya at a bar that he was going to “kill her and her loser husband.” And, it gets worse, Sal worked at a dock where they used acetone and toluene to clean the boats.

The next day Jane shows up at the office wearing Maura’s clothes and says that she is dressing as a librarian. Maura is confused why she is trying to pass as a librarian, but Jane rushes off without explaining.

Frankie and Vince bring Sal in for questioning. Sal insists that he is innocent and claims he was on a fishing boat with four other guys when the fire was started. He gives Vince their names and numbers and Vince calls them and verifies that he was forty miles off shore when the fire happened. Now, they are back to square one.

Jane shows up at the police station with an evidence bag with Rick’s pants in it. Vince is thankful but jokingly warns her that she could be fired. Jane boasts that she flirted her way past the officer on duty. Maura runs tests on Rick’s pants and learns that the acetone on his pants was urine, and he was so drunk that night he peed his pants.

Vince pays Rick’s son Jason a visit, and reveals that there is new evidence in the case that could set his dad free. Jason doesn’t want to hear it, he is convinced that Rick killed his mom and sister. He says the only way he will believe it is if they show him the guy who did do it.

Jane returns home and her mom wants to know why she is dressed like a sexy librarian. Jane explains she had to go to the office and help Vince. Her mom feels guilty because she can tell that she really loves her job. She takes out a letter that she hid two days ago, Jane was cleared for her job, but her mom didn’t want her to go back to work. She is officially cleared for work in two days, Jane jumps up and down and squeals because she is so excited. Her mom isn’t happy though, she doesn’t want to have to worry about her. Jane promises to spend time with her and have a movie night before she goes back to work.

Vince pays Rick a visit in jail and reveals to him that he might be able to overturn his conviction. Rick wants to know if he talked to Jason, and Vince reveals that it wasn’t a good conversation. Rick says he doesn’t care if he gets out of jail, he just wants his son to know that he isn’t guilty.

Frankie goes to talk to the people that moved in to the house across the street from Rick’s house. They said they bought the house the day after the fire, the owner Melvin Tuttle wanted to make a quick sale and he didn’t even show up to the closing. Frankie and Nina run a background check and realize that Tuttle was a meth dealer and in a biker gang. But, he was stabbed to death six weeks later in Florida.

Nina and Jane watch drug surveillance videos of Melvin right before the fire. They find a video of him being beat up at a bar, and he jumps in a red truck and leaves while they throw stuff at the truck. They remember that Rick owned the exact same red pick-up truck as Melvin. Jane and Frankie put two and two together and realize that the biker gang wanted Melvin dead and burnt down Rick’s house instead of his by mistake because there was a red truck in the driveway. Rick has been sitting in jail for fifteen years because a biker gang mixed up addresses and burnt down the wrong house.

It’s finally time for Jane to go back to work, she gets dressed and heads to the office. When she shows up at work, Vince and Frankie have the Florida case file on Melvin’s death. They bring in the suspect that killed Melvin, a biker named Blade. There were two bikers seen driving down the street the night Rick’s house was burnt down. They bring Blade in and Jane offers him a deal, if he confesses to the fire, then Florida can’t execute him because he is doing life here. Blade confesses to the entire fire, and admits he mixed up the red trucks. Rick’s son Jason watches through the glass and cries that he can’t believe his father is innocent. The DA files a motion to overturn the verdict, and in two days Rick will be a free man.