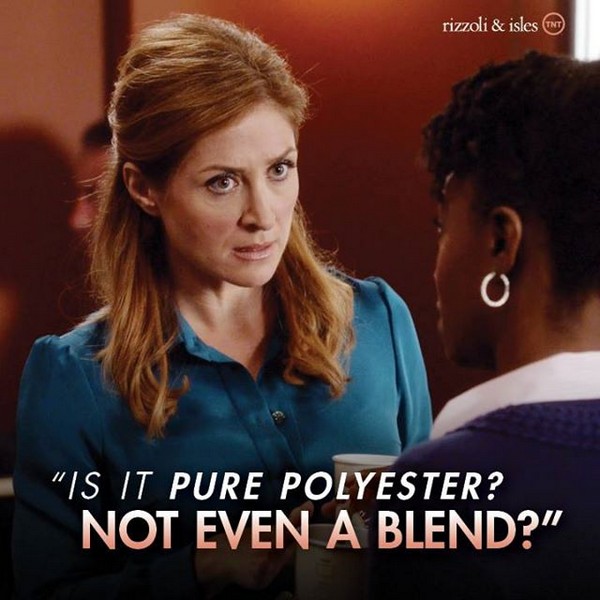 Tonight on TNT RIZZOLI & ISLES returns for another episode in its fifth season called, “If You Can’t Stand the Heat.” On tonight’s episode a man dies suspiciously in a bathtub full of ice during a heat wave. Angela tries to stay cool by drinking a spicy tea, but the beverage brings with it unforeseen romantic consequences.

On the last episode the team helped Korsak investigate an old case that had gone very, very cold. Jane refused to believe that she was not ready to go back on duty and took some untraditional steps to stay involved. Did you watch the last episode? If you missed it we have a full and detailed recap, right here for you.

On tonight’s episode In the middle of a heat wave, Jane and Maura find a man who died suspiciously in a bathtub full of ice. In trying to stay cool, Angela discovers a spicy tea that seems to be working, but it has unexpected romantic consequences.

Tonight’s episode of Rizzoli and Isles begins with Maura and Jane heading to a crime scene, Korsak has a tiny dog that he found wandering around on a leash, he couldn’t just leave him. Frankie comes down and says there is a dead 28 year old man named Richard on the third floor.

Jane and Korsak head upstairs and meet the landlord, he says he found him at 10:30 this morning. The neighbors downstairs complained of water leaks, so he let himself in and found the body in the bathtub. They head in to the bathroom and find Maura taking samples, she has no idea what the time of death was. His upper body is badly decomposed from the heat wave, but the part of his body that is under the water is beautifully preserved. They think he may have been drunk and was soaking in a tub of ice to get out of the heat, and died of hypothermia.

They take the body back to the lab, and Maura goes over the autopsy report. It turns out the victim had a crushed larynx and his cause of death was strangulation. His blood alcohol content was .19, so he was drunk and easy to strangle. Jane is perplexed as to why the killer put the body on ice afterwards.

Jane and Korsak head to the office, they don’t have much on the victim, but the landlord did say that he had a girlfriend. Frankie arrives with the dog that Korsak rescued, he insists he is going to find the owner, but he has already named is “Sipowitz.” He realizes that the dog only responds to Spanish, not English.

Frankie pulled the victim’s financials, and is shocked to realize that he was actually a millionaire. They meet up with his stock broker, Alex Reubens, and realize that she is actually his girlfriend too. She reveals that all of the money that Alex had in his account he found in a park while he was jogging, it was the same time as a huge drug bust in the park. Alex admits that now that he is dead, she gets his money. She says that Richard was working on a novel, and he wasn’t going to spend any of the money until he sold his novel.

Korsak researches the drug bust in the park where Rich told his girlfriend that his money came from, and learns that there was an undercover cop involved and they only exchanged $20,000.00 not over a million. Frankie pulls the files on Rich’s computer and learns that he lied to his girlfriend, and he didn’t write a novel nor was he working on one. Jane thinks that he is actually a drug dealer, and made up the cover story about finding the money so his girlfriend didn’t know what he was up to.

Jane’s mom Angela picks up Sipowicz form the police station, she’s ondog watching duty today. She flirts with Korsak before she leaves and tells him that his tie brings out the color in his eyes. Frank and Korsak interview the bouncer from the bar where Rich worked, he says Rich is one of the “most law-abiding people he ever met.” He says Rich even got him into writing, and everyone couldn’t wait to read his novel. He says there was one guy that came in to the bar, and he really scared Rich, they send him to a sketch artist to try and ID the guy.

Jane heads to the lab where Maura is testing the cash that Rich gave to his girlfriend to put in to his account. She says the money has no germs on it, and was all printed in 2008, it’s like it came off the presses and never went in to circulation. There is a strange substance on the bills though, embalming fluid and pesticides. Jane remembers that Rich’s girlfriend Alex said they met at a cemetery.

Jane and Korsak head to the cemetery where Alex met Rich. They arrive at Rich’s family mausoleum and see that the lock is busted and someone broke in. They find one of the coffins open, and along side the bones is some cash. Korsak jokes that Rich was “using Granny for an ATM.”

Jane and Korsak talk to the groundskeeper, he says that Rich never would have broken the lock because he had a key. He noticed the lock was broken on Sunday, before Rich was murdered, and he called him and left him a voicemail message to let him know the lock was missing but Rich never answered.

Jane heads to the lab and Maura has an analysis from the water they found in the bathtub with Rich. She says that the water in the bathtub is lacking sodium, and desalinated water is used in agriculture and in computer hardware and by some sailors.

Frankie digs up some dirt on Rich and finds out that he used to work in the mailroom at a company called Chen Industries. A kidnapping occurred at Chen Industries six years ago, the CEO of the company’s son was kidnapped, he paid the ransom and his son was returned. Jane and Korsak are certain that Rich’s money is related to the kidnapping.

Jane and Korsak head to Chen Industries to talk to Harold Chen about his son’s kidnapping. Harold doesn’t want to talk, and says that was years ago and his son if safe now. They tell him they think they found his $2 Million dollar randsom, but he says that is a drop in the bucket compared to the hundreds of millions of dollars he will lose if he doesn’t make it to his meeting.

Later that day Harold Chen’s daughter shows up at the police station and says that she wants to know if there is more information on the kidnapping, she seen them talking to her Dad. Jane says she needs to talk to Eric Chen, his sister Lucy takes them to the mental hospital where he checked himself in five years ago. Eric says he doesn’t want to talk to Maura and Jane because he is busy. Jane tells Eric they think they found one of his kidnappers dead, and if he helps them they think they can find Rich’s accomplice.

Eric agrees to help and tells Jane and Maura that he went out to drink on Friday night, and before he knew it he was drunker than he had ever been. He tried to leave and vaguely remembers going outside and asking for a cab. There were two men, a nice one and a jumpy one, he woke up blindfolded and tied to a chair, his kidnappers made them talk to his dad on the phone and tell him he was alive. While he was kidnapped he smelled sewage and heard foghorns.

Back at the station they pull Rich’s phone records form the year of Eric’s kidnapping. One of the people that Eric called matches the sketch of the guy the bouncer described, his name is Billy and he owns a boat. He works at the East Boston fish market. They think that Billy broke in to the mausoleum to get his money, and when he realized it was gone he went over to Rich’s and killed him because he thought he stole it all.

They head to the fish market to pick up Billy and as soon as he sees Jane and Korsak he bolts. Frankie chases him down and they arrest him for the kidnapping of Eric Chen and murder of Richard Nelson. Maura and Jane head to the mental hospital and tell Eric that his kidnapper is behind bars and he can check himself out now because he has nothing to be scared of.