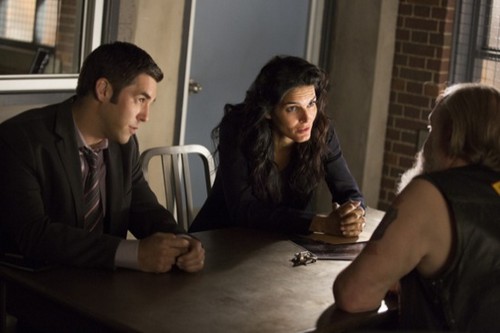 Tonight on TNT RIZZOLI & ISLES returns for another episode in its fifth season called, “Burden of Proof.” On tonight’s episode a notable county prosecutor (guest star Jamie Bamber) is arrested for murder and the case against him grows increasingly strong.

On the last episode in the middle of a heat wave, Jane and Maura found a man who died suspiciously in a bathtub full of ice. In trying to stay cool, Angela discovers a spicy tea that seems to be working, but it had unexpected romantic consequences. Did you watch the last episode? If you missed it we have a full and detailed recap, right here for you.

On tonight’s episode a notable county prosecutor (guest star Jamie Bamber) is arrested for murder, and as the case against him grows increasingly strong, Jane begins to doubt he did it. Angela nominates herself to educate Maura on the interests of kids today when she hears Maura is going to meet Jack’s 12-year-old daughter.