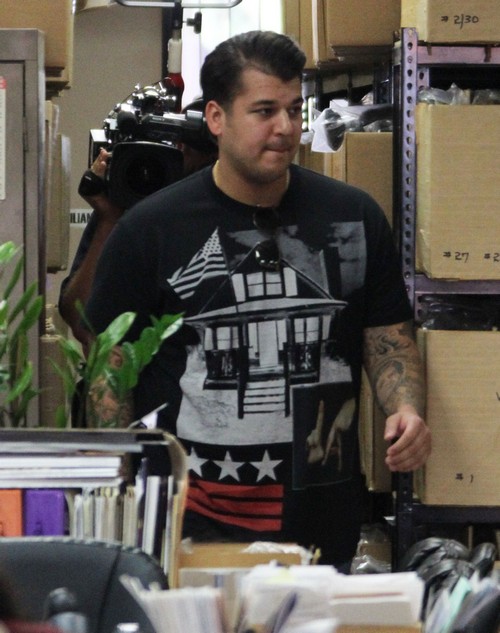 Although Rob Kardashian really should be attending rehab somewhere or at least resting and keeping his spirits up, he’s been forced to attend the public merry-go-round that is sister Kim Kardashian‘s wedding in Europe.

There have been plenty of reports about Rob’s ballooning weight, and possible mental health concerns that led to the weight gain. Several sources stated that Rob was dealing with depression for a few months, and that was one of the reasons for the massive increase in weight. However, he clearly hasn’t had much time to recover, at least if the sources are correct. It seems like he was in the process of recovering when he was jerked out and forced to make public appearances again, and it’s no doubt taking a toll on him.

According to Radar Online, Rob has been ‘feeding’ his depression by binging himself on alcohol and Xanax, two of the worst things for a person battling sadness and anxiety. Everything in moderation might help, especially if the Xanax is prescribed, but it looks like he’s been abusing both the pills and alcohol in an attempt to keep himself from cracking under the pressure.

We already know how his family is treating his weight gain, and the poor guy’s probably buckling under the expectations to lose weight and look perfect. A source also explains that Rob also feels left out of the family sometimes, especially since his sisters have become so famous. The source adds, “He’s looking sad and ‘depressed’ big time right now. He’s not exactly the famous one in his family and he sort of feels like he’s nobody except the Kardashian name. He takes Xanax and has been drinking really heavily. Not to mention he’s eating like crazy!”

Well, we could have guessed the last part pretty easily. Rob still refuses to admit that he has any sort of major health issues, claiming that all the therapy he needs is in the gym. In fact the family are flying out Rob’s personal trainer to France for Kim’s wedding spectacle. Um… sure, I guess? With a family like that, it’s no wonder he thinks that he’s completely fine and doesn’t need therapy. Surrounded by famewhores, you inevitably start to absorb some of their qualities, and massive hubris and self-delusion are definitely two of them.