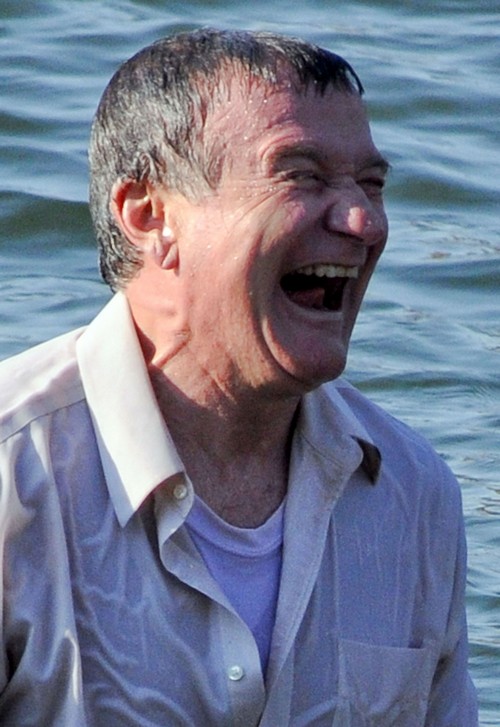 As we begin to unpeel the layers of facts that may have led Robin Williams to commit suicide, we are finding out just how insecure the actor really was. Though he performed in front of thousands and has a long, successful career in comedy and acting, Robin Williams was indeed very insecure who likely used alcohol to suppress his feelings of self-doubt and provide him with enough liquid confidence to live his life in the spotlight.

Robin’s insecurities started as a child, and he’s admitted to still carrying those feelings in a recent interview shortly after marrying wife #3 Susan Schneider, noting that his lack of friends as a child may have contributed to the problem. In an interview published by the Daily Mail UK, Williams shared, “I get insecure as a comedian and a person; you’re still wired from how you were as a child, awards don’t change you. I was an only child, so I was always working the room, checking everything out,” noting that because of his family moving around the US quite a bit, he was unable to build any lasting friendships. He added, “There were long periods of my life that I spent alone.”

Williams battled alcoholism and cocaine abuse for many years, but after 20 years of sobriety he entered rehab in 2006 for alcohol abuse. Shortly after his 2006 stint, the Huffington Post shared an interview with Robin where he spoke of his addiction, “It’s [addiction] — not caused by anything, it’s just there. It waits. It lays in wait for the time when you think, ‘It’s fine now, I’m OK.’ Then, the next thing you know, it’s not OK. Then you realize, ‘Where am I? I didn’t realize I was in Cleveland.'” He went on to share how he finally sought help after unsuccessfully trying to handle addition on his own, “But you can’t. That’s the bottom line. You really think you can, then you realize, I need help, and that’s the word … It’s hard admitting it, then once you’ve done that, it’s real easy.” And after several more years of sobriety, Williams would again enter rehab, this time only stating that he was working on his “continued sobriety” in a program geared toward long-term sobriety in July of this year.

The question now is what drove Williams into his depressive state? Could his insecurities from his childhood, mounted with his belief that he failed as a husband (from his past two failed marriages), along with his inability to refrain from drinking have caused him to become so severely depressed that he decided to end his life?

With a foundation of insecurities stemming from his childhood, Robin has a history of being unfaithful. He had to constantly feel that adoration and constant praise that after several years, you no longer get from your wife on the same level. He continually sought out that feeling to make him feel good about himself, but it cost him two marriages. So while his insecurities drove him to cheat, they also amplified the feelings of failure after he was the reason for his two past divorces.

Robin carried the insecurities of failing as a father by not being around as much as he should have and for being unfaithful to his children’s mothers. All of these feelings, along with the cancelation of his show with Sarah Michelle Gellar, The Crazy Ones, may have fed his insecurities even more and contributed to him feeling depressed. He was becoming concerned about finances after losing approximately 20 million from his two divorces. In an interview with the Huffington Post in 2013, Williams shared, “There are bills to pay. My life has downsized, in a good way. I’m selling the ranch up in Napa. I just can’t afford it anymore.”

Williams’ rep shared that the comedian had been battling severe depression for some time. His statements about medication, in which he spoke of in an interview after his 2009 heart surgery where he referenced Michael Jackson’s misuse of the drug Propofol, seem to hint that he may have forgone medication to treat his depression for fear he would become addicted to the medication or perhaps he’d misuse it. While the actor went back to rehab for continued treatment of alcoholism, he may have neglected the true underlying problem, his severe depression. Not treating his insecurities and depression with the help of professionals has, very tragically and sadly, cost him his life.

We will keep peeling away more layers for you, CDLers. For now, share your thoughts about Robin’s suicide.