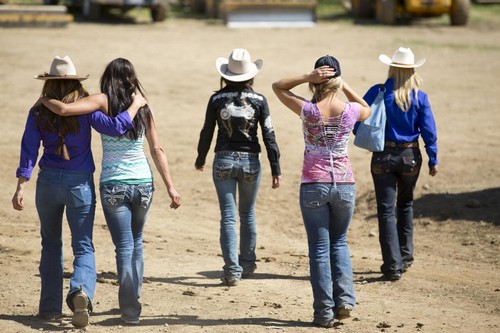 Tonight on A & E their new series RODEO GIRLS continues with a brand new episode.  On tonight’s show called, “Hot To Trot,” Darcy takes the other ladies on an unexpected detour during a visit to Cody, Wyo.  Did you watch last week’s episode?  We did and we have a full and detailed recap, right here.

On last week’s episode stops at home between rodeos brought issues to the forefront and forced the Rodeo Girls to re-evaluate their lifestyle choices.  At a crossroads, they had to make decisions that affected each of their lives and their loved ones.

On tonight’s episode the rodeo hits the Wild West town of Cody, Wyoming, and Darcy takes them for an unexpected and unwanted tour.  Tensions mount between Darcy and the other women when they realize this detour could be more trouble than worth.

Tonight’s episode is going to be another drama packed one, which you won’t want to miss. So be sure to tune in for our live coverage of A & E′s Rodeo Girls Season 1 Episode 5 at 10PM EST! While you wait for our recap, hit the comments and let us know how excited you are about the new episode of Rodeo Girls tonight.

Darcy arranged for a training retreat. All the women will have to share a cabin and kind of de-stress from their normal lives and the problems that come with them. This trip is also supposed to help her after she decided to let her son, Nick, stay out there in LA. She realized she couldn’t hold him back from pursuing his dream. Especially not when she went out to LA by herself at 16. So she’s focusing on letting go and who better to help than the trainer at the retreat. His name is Dean and all the other pick up on his marked favoritism for Darcy.

This is Barb’s birthday weekend and she feels like Darcy arranged this retreat just to meet someone. This vacation was supposed to be about riding horses and only horses. However this trip won’t be all about Darcy’s love life seeing as Ty made an appearance. He apparently wants to be there for Marv and help her despite the whole getting fired business. To say she isn’t enthused would be an understatement. He may not remember but she sure recall getting stood up during a competition. The only person that appreciates Ty coming back is Megan. She thinks it was sweet of him to still want to support Marv.

Some people aren’t afraid of showing how much how they appreciate Ty. Megan later joins him by the pool wearing a bikini. She said she just needed to get away from the others for a while and yet she came prepared in a bikini. Hmm…

Marv was able to clear the air with Ty though. In the end they are cousins and he originally came around to help her and offer support in her fight with her ex-husband. The other women don’t know that Marv’s ex took out a restraining order against her. She recently had to face him in court and she really needed Ty there. Ty would have been there but he tells Marv she has to open herself up a little. Not keep everything bottled in and leave him to guess what’s really going on.

Barb it seems also needed a break from the other women. She went out to barn to groom her horse when she ran into Sadie. Sadie has been thinking about entering the rodeo business and she finally made a decision. She’s going to do it and she’s lucky because Barb is there to support her. For years Sadie has been there for her and now when the shoe is on the other foot; Barb promises to do anything she can’t to help her friend.

There was a great part of the trip. The girl got to herd the horses and enjoyed herself. However Ty has a problem with their trainer. He feels like Dean is full of it with his cowboy routine. And even though the ladies don’t say anything, they kind of agree with Ty. From the beginning Marv has been worried that Dean was interested in Darcy for more than her looks.  Does Darcy see this? No she does not. She defends Dean to Ty and later is seen sharing a tent with Dean.

By the next morning, Barb tries to warn Darcy that Dean was bit of poseur and the other woman refuses to hear it. All the criticism is coming off to her as the group being ungrateful. Dracy continues with attitude into dinner. Where Dean is faced with some tough questions about his training abilities. These women are used to training their horses by themselves and they only person who honestly thinks Dean is legit is the one rider with enough money to hire a trainer. After a while, Darcy didn’t want Dean to fight hi own battles and so she fought them for him. She got aggressive with Barb and called the woman a has-been. Never mind that she’s won less than Barb because as the women say this is only a rich girl’s hobby for Darcy.

As part of their deal, Barb helps Sadie barrel race. Sadly, Sadie didn’t do so well on her first run. She ended up falling off her horse and Barb was worried about her friend. Sadie might have lost her confidence in that fall and Barb truly hopes she’ll be able to get back on that horse.

Ty woke up in Megan’s bed. Both of them swear nothing happened. The story is Ty fell asleep on top of the sheets even though there was a couch available to sleep on. A fact Jessica couldn’t help pointing out.

The fight between Barb and Darcy isn’t over. There was a toilet incident in which Darcy said someone didn’t flush something nasty and Barb says she’s lying because she was the last in the bathroom. Later the women have to compete against each other. Darcy in a chest baring top managed a great time. She using the new techniques Dean had showed her but Barb (who was basically ignored by Dean) beat her time easily. Barb won and still Darcy couldn’t muster any goodwill towards her. They were exchanging insults even as they were putting their horses away.

Some months pass and soon it the fourth of July. Around this time, Darcy usually throws a big get together because she loves the holiday as well as it being close to her birthday. Darcy wishes to put the past behind her so she’s going to invite Barb. She’s also going to invite her new guy, James. Nick is back but he wasn’t too thrilled about this James guy.

Barb is going to the party. She was close to turning down the invite when her husband pointed out that they’ve all been friend for years. Darcy might have change but should they throw away such long standing relationship.

Darcy had to leave the house for a while so she told all her guests to let themselves in. She didn’t count on Nick showing off his ATV. He made it look appealing and everyone else wanted to have fun too. They did so at the expense of Darcy’s lawn. When she came home and saw the damage – she was pissed!!! It highly unlikely that she and Barb will be making up soon.