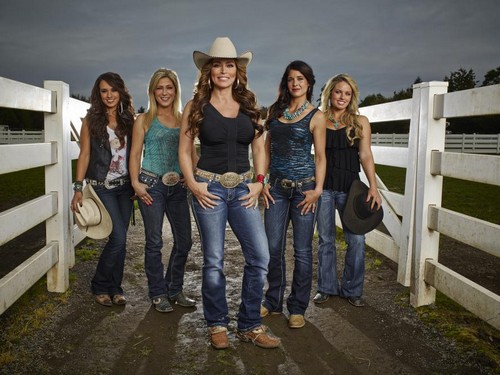 If you have never watched the show before Rodeo Girls offers a glimpse into the competitive and often glamorous world of the women of the pro-rodeo circuit and the relationships that hold them together. Problems from the road follow the girls as these fierce competitors head to the rodeo every weekend.  The Rodeo Girls prove that competitions are more than just cowboy boots, chaps and spurs. With tough-as-nails attitudes, these barrel racers face stiff competition and high stakes as they compete for the fastest time and the chance to win thousands.

On tonight’s show stops at home between rodeos brings issues to the forefront and force the Rodeo Girls to re-evaluate their lifestyle choices.  At a crossroads, they must make decisions that affect each of their lives and their loved ones.  Will they choose freedom or let themselves be tamed?

Tonight’s episode is going to be another drama packed one, which you won’t want to miss. So be sure to tune in for our live coverage of A & E′s Rodeo Girls Season 1 Episode 4 at 10PM EST! While you wait for our recap, hit the comments and let us know how excited you are about the new episode of Rodeo Girls tonight.

Darcy is back home and hoping to bond with her son Nick but is disappointed to find her son isn’t as happy about her return. He told her he wanted to move out to LA to go live with his dad. Having Jean Claude Van Dame as his father has inspired him to want to become an actor. Darcy understand where he’s coming from despite not wanting to let go of her son. No that it will stop him. He says he’s going with or without her permission.

Returning home is turning out to be a disappointment for most of the women. Barb thought she could come back and have her husband support her when he implies they need to discuss whether she can compete. In the beginning of their relationship, they both did rodeo and towards the end, she stayed home while he was out riding. Would it be too much to expect him to offer the same support she gave him?

Jessica invited her boyfriend, Anthony, to come and stay with her for a few days. It could have been a nice idea if she had only thought about her roommate. Megan was upset no one checked in with her but she won’t make a big fight out of it. She tried to caution her friend not to rush into a relationship and either Jessica will listen or she won’t.

Jessica should have listened. She’s rushing into this relationship to the point Anthony puts brakes on it. He did it after she asked him to meet her mom. Although he traveled to see her, he did it to have fun and relax. Meeting her mom is too big of a step to him. And Jessica is now wondering why exactly. Does he take their relationship seriously?

Feeling hurt, Jessica explains to her boyfriend how she needs his support. It’s hard going back to face her mom seeing as it’s only the two of them since her dad died so suddenly. Anthony feels bad hearing why she needed him on her visit makes him change his mind. Not that it will stop from now being nervous. Meeting the parent or parent is a big step. In his case, he was either really liked or really hated. With Jessica’s mom he got lucky. He was liked.

All their baggage aside the women have to focus on their next competition. Barb’s husband wouldn’t come out to be there so she invited a friend instead. That should Brian just because he wanted doesn’t mean he’s needed. Unfortunately, there’s new competition on the block and Darcy is pretty sure the new girl will knock Megan off of her perch. Lately Megan has had to deal with Anthony and his attitude. The guy refuses to believe Megan is treating Jessica right even though all the equipment including the trailer they live in belongs to her. The three’s a crowd business could have messed with her usual composure.

Megan is practicing with Barb and Darcy. She knows she needs the extra preparation but while she’s training, Jessica is getting caught up with her boyfriend. The couple misses out on everybody else partying. And it would have been fun to watch. Ty got really drunk and began inappropriately hitting on every woman in sight. The rodeo girls actually end up leaving just to escape his pervert moves.

By the next morning, Barb asks Jessica about her relationship. She wanted Jessica to focus on her training when she ends up getting told off. Jessica feels like she’s had to take a lot of flak from Megan and she doesn’t need anyone else’s opinion. She has a mother and her mom approves of Anthony. End of discussion!

Ty is a great trainer although Marvel could have done without his immaturity. If he pulls another stunt like he did at the bar, she might have to let him go. Especially when he goes missing for hours on end. She hasn’t seen him since the party.

Brian arrives to be there for Barb and she’s so happy. Someone who isn’t happy is Jessica. She thinks it’s hypocritical that Barb gets to spend time with Brian and no one says he’s a distraction. Megan tells her that a husband is a much different category than a boyfriend she’s only known for weeks.

Jessica thought she would do well in the competition and she didn’t even manage to qualify. Neither did Darcy or Megan. Darcy was worried about her son without telling her and Megan had to deal with the new girl. Kelly has one of the more expensive horses and she’s got a mouth on her. She talked Megan up before the later’s turn. Megan never got the chance to put her in her place.

So far Barb is the only one to have done well. When Marvel’s turn comes out, she still hasn’t caught sight of Ty. This is the first time he’s missed a run of her’s. When he does show up, he isn’t even remorseful. Marvel wasn’t left with a decision. She had to let him go.

Darcy found out that her son left to go join his dad. He moved to LA without notifying her.

Megan saw how messy her trailer was and decided to throw Jessica out. She had two rules – no messes and no boyfriends. Anthony has been nothing more than hassle and a mess so Jessica gets evicted. No two weeks’ notice. She simply threw Jessica’s stuff out of the trailer.

Jessica now has to find her own way to their next competition.