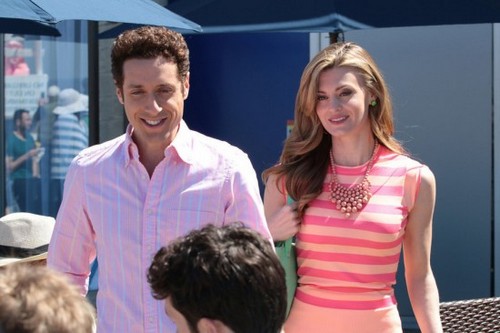 Tonight on USA Network ROYAL PAINS continues with another episode in its sixth season called, “Not Quite Far Enough.” On tonight’s show Divya searches for a nanny, while Jeremiah makes a friend.

On the last episode Hank found that he worried about the health of a new tennis star while a fellow tennis player who was a professional also fell ill, he had to figure out how to get them healthy again. Meanwhile Hank and Evan were struggling to come to terms and Evan and Paige turned a corner that was unexpected. Did you watch the last episode? If you missed it we have a full and detailed recap, right here for you.

On tonight’s show Jeremiah goes out and makes him self a new friend, while in the meantime Divya is on the look out for a nanny. Hank Evan and Paige want to see Eddie and Emma get together and have a relationship with each other.

Tonight’s episode looks like it is going to be great and you won’t want to miss it, so be sure to tune in for our live coverage of USA Network’s “Royal Pains” at 9:00 PM EST! While you wait for our recap hit the comments and let us know what you think about the sixth season of Royal Pains so far. In the meantime, check out the preview of tonight’s episode below.

Hank and Evan come to Eddie’s house to find their dad drinking alone in the dark. Eddie tells them about his encounter with Emma who secretly stole his DNA to run a paternity test. The scene flashes back to Emma informing Eddie of the results, he is indeed her father. The conversation gets heated as she tells Eddie that he’s a deadbeat dad. Eddie tells the boys that he feels guilty for how he behaved with Emma.

Evan tries to make Eddie feel better by making him breakfast. Hank, on the other hand, believes that they should leave the situation alone to give Emma some time to cool down. Evan eventually agrees. In comes a perked up Eddie with a giant stuffed bear in hand ready to give it to Emma. Evan helps by driving Eddie to see Emma. Unfortunately, the bear doesn’t come across well with Emma and “Pookie” ends up face down in the pool.

Later that day, Eddie role plays with Evan and Paige to help him prepare for his next meeting with Emma. Privately, Paige convinces Evan to help build the bridge between Eddie and Emma. Eddie then comes up with the idea to invite Emma to come with him on his book tour. Evan and Paige are more than happy to help Eddie patch things up with Emma.

Divya hires a new nanny, Matilda, but is nervous about leaving her baby for the first time. While at a client’s home, Divya meets a fellow mother and her three kids. After saving the kids from a potentially dangerous mixture of chemicals that were being used as part of a science project, a paranoid and overprotective Divya now suffers from separation anxiety more than ever before. Luckily, her nearly perfect nanny Matilda is excellent at making her feel better. Matilda is so perfect in fact, that she gets poached from Divya by her own client.

Evan and Paige meet with Emma to try to talk Emma into giving Eddie another chance. Emma finally realizes that Eddie never knew he had a daughter. Emma agree to meet Evan, Paige, and Eddie at the beach. There they realize that Emma never learned how to ride a bike. Eddie takes advantage of the opportunity to teach his daughter and make up for lost times.

Hank and Divya have an awkward meeting with a PI, Annie, whose busy schedule forces her to meet with them while undercover. During a second meeting, Hank meets Annie at a country club where she continues to watch a husband suspected of cheating. Hank asks Annie to run a background check on Emma. Feeling ill, Annie leaves Hank to keep an eye on the husband. Suddenly, the man next to him collapses on the ground, forcing Hank to come to his rescue.

Hank later finds that the man Annie’s been following is her husband. A highly stressed and emotionally distraught Annie decides to confront her husband but is hit with a heart attack. Hank shows up just in time to chauffeur Annie to the hospital. When Annie’s husband comes to visit her, he shows up with the other woman. In turns out, the woman is a custom car designer hired to design a car as a gift to Annie.

Jeremiah goes to a bar for some quiet time to himself and get work done. The waiter is puzzled by Jeremiah’s desire to work in a bar. She chats him up and talks him into ordering some food. He gives in but only orders food for her. This becomes a daily ritual for the two of them.

After reuniting with his estranged daughter, Eddie receives news from his sons that a background check on Emma turned up some new information. The family finds that Emma is 17 and ran away from home to get away from her gambleholic mother and find Eddie. Despite the new information about Emma, they decide to welcome her to the family. Everyone is thrilled to bring in a new family member; everyone, that is, except Evan who secretly confesses to Paige that he paid Emma to show up to the beach that day.

Is Emma being completely honest with the family? Does she have ulterior motives? Stay tuned to this season of Royal Pains to find out!