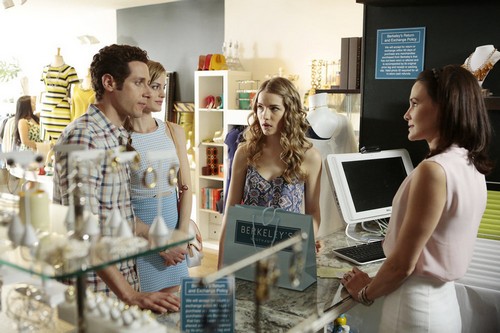 Tonight on USA Network ROYAL PAINS continues with another episode in its sixth season called, “All in the Family.” On tonight’s show Hank worries over the health of a rising tennis star while a fellow professional also falls ill. Elsewhere, Hank and Evan struggle to come to terms with a revelation, and Evan and Paige turn a corner.

On the last episode after a winter abroad, Hank returned to the Hamptons to celebrate the latest addition to the HankMed family. Evan and Paige took a hands-on approach to their marriage. Later Evan hatched a plan to make Hank stayed in town after a saxophone player fell ill. Meanwhile Divya experienced the joys of motherhood and a mysterious party guest brought surprising news for the Lawson family. Did you watch the last episode? If you missed it we have a full and detailed recap, right here for you.

On tonight’s show Hank beings to find himself worrying about the health of a new tennis star while a fellow tennis player who’s a professional also falls ill, he has to figure out how to get them healthy again. Meanwhile Hank and Evan are struggling to come to terms and Evan and Paige turn a corner that was unexpected.

Emma is Hank and Evan’s sister!

Eddie R. Lawson is also her father. He and her mother were married for a few years back in St. Louis and for a while they played happy families. Then Eddie, true to routine, walked out on his second family just like he did with his boys and their mother. So now Emma wants to find him and no offence to her brothers, but she doesn’t really care all that much about meeting them.

And that could be a good thing. Evan didn’t taking hearing the news about a sister all that well. Lately, he’s been going to couples’ therapy with Paige and he thought he had reached his center (happy place). Yet the mere thought of Emma is throwing him off his “center.” When he wasn’t being skeptical of her and her story, he was worrying his father had even more children out there.

Paige on the other hand remains sane. She tried to arrange a sit-down with Emma and her plan almost failed to work until Evan stepped in and made the offer to dinner himself. He actually wants to get to know Emma and perhaps he’ll end up being the one that cracks the mystery about her. Because there is something off with Emma. She’s driving a Porsche and talking about spending her summer in Europe. Typical things associated with a rich girl yet she refuses to cut the tag off a very expensive dress. The last is part of a trick girls use if they want to dress to impress on the Monday and return the dress for full price on the Tuesday. Otherwise known as a poor girls’ trick!

With Hank back in the Hamptons, Jeremiah can take a step back from being the main doctor in charge. His friends thought maybe he would feel undervalued however he’s being really serene about all the changes. Like he isn’t even complaining about Divya or the baby invading his personal space. Instead, he’s taken to hiding in a nearly deserted bar of all places in order to avoid confrontation.

And Hank is busy with his new case his old nemesis/now friend Ken gave him. He has to treat two tennis stars for what could be an unknown viral infection. At first he thought the female prodigy, Tracy, was the one with the problem. Though her tests results came back fine. So he wanted to look at Aaron and surprise, surprise the man collapsed before he could do a physical.

Aaron and Tracy used to be together and so wherever he went and caught this thing – it’s safe to say that Tracy has also been put at risk.

It’s a mystery, but one that doesn’t faze Hank. Hank likes going back to work. He loves the treating patients parts more than doing the paperwork. So he asked Jeremiah to stay on as Director of Hank Med. This way he’ll have the time to follow his cases from day one all the way to the end. Like he ultimately managed to do with Tracy and Aaron.

The tennis stars hadn’t developed a tropical disease at all. Tracy had a treatable condition it seems from birth and it’s not going to be a big deal for her future tennis career. As for Aaron, he has a bad case of anxiety. And he would only develop symptoms when he was worried about Tracy. So rather than prescribe him something, Hank told Aaron he was still in love with Tracy and maybe the other man should act on those feelings.

Emma’s secret eventually came out. She’s not this trust fund kid. The truth is she’s been working at a restaurant in the Hamptons to pay for all the stuff she’s bought to impress Hank and Evan with. But she is poor and she did try to return that dress. The store owner had caught on to the con and wasn’t going to accept it though having Evan and Paige stick up for her changed the store owner’s mind.

Emma sat down again with everyone and this time she claims to finally be telling the truth. She works as manager at a dinner back home and she originally wanted to come out to the Hamptons so that she could throw what little success she had in Eddie’s face.

Then seeing how Evan and Hank lived made her feel like she had something else to prove. Which she doesn’t and her new found family assured her of that.

The return of Eddie Lawson is bound to cause trouble. Eddie got their messages and decided to pay his boys a visit. He came back to the Hamptons and found all of them waiting for him. Including Emma whose mother is apparently a sore spot for Eddie. Just hearing Meredith’s name made him ask what kind of con she’s pulling now.