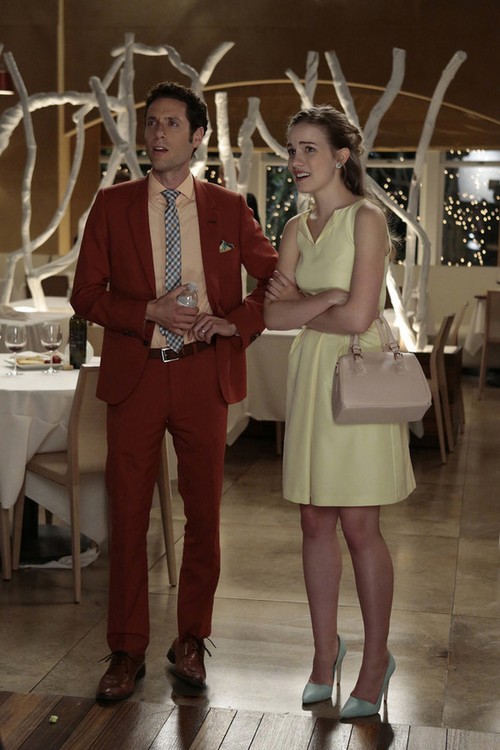 Tonight on USA Network ROYAL PAINS continues with another episode in its sixth season called, “Everybody Loves Ray, Man.” On tonight’s show Hank feels there may be more to Ray’s new chef’s seemingly drunken behavior on the job.

On the last episode Evan reached out to a woman with a mysterious illness hoping that Hank could offer a diagnosis. Elsewhere, Paige and Russell wondered if a new client was a goldmine or liability, Emma helped Hank regain a patient while Evan and Jeremiah realized they had to go to battle with Symphony. Did you watch the last episode? If you missed last week’s episode we have a full and detailed recap, right here for you.

On tonight’s show Hank feels there may be more to Ray’s new chef’s seemingly drunken behavior on the job, while Divya treats a NASCAR crew chief whose anxiety has a dangerous turn. Jeremiah is concerned about the future of HankMed’s new lab, and Divya makes a decision about the future while Hank talks to Emma about her own.

Tonight’s episode of Royal Pains kicks off with Divya returning home from work, her manny Timmy tucks Sashi in to bed in her nursery and heads out, after asking Divya for time off to take a class.

Jeremiah breaks the news to Evan that the last space they looked at for their business Hankmed isn’t going to work out. Ray invites them to come inside, and he offers them some pointers on building a business.

Divya video chats with Loraina and thanks her for sending the baby some clothes, Loraina reminds her that Sashi is half Argentinian. Hank joins Divya and gives her a pep-talk about being a great mother, Divya informs him she has to take tomorrow off to search for a new nanny.

Ray shows Hank and Jeremiah a property that he owns, and says he is willing to cut them a deal on the space. Jeremiah is skeptical, since the other half of the building is rented out to a strip club. But, Hank is sure this is the big break HankMed has been waiting for.

Afterwards Hank is called to Ray’s restaurant, Ray’s chef was “drunk as a skunk” on opening day and Ray punched him in the face and broke his leg. Hank isn’t easily charmed by Ray and tells him to leave the restaurant so that he can take care of the chef. Chef insists that he isn’t drunk, so Hank agrees to order a blood alcohol test to make sure that there isn’t something else wrong with him and making him stumble around.

Hank and Evan head to the restaurant where Emma waitresses. They watch her serve a weird guy in the corner and he gives her a $100 tip and a cell phone, and says it is from “Oz.” Hank is convinced that she need some fulfillment in her life.

Jeremiah whines to a waitress at a bar about how he wants to rent Ray’s space for HankMed but he can’t open a medical facility next door to a gentleman’s club. The waitress takes him inside the gentleman’s club and shows him around and introduces him to some of the dancers.

Hank heads back to the restaurant and tells Ray’s chef that he got back his BAC test and it was off the charts. The chef explains that he used to be able to drink a bottle a day, and now whenever he drinks two or three sips he gets drunk as a skunk.

Emma goes out to dinner with Hank, and tells him that he should go back to college. She gives him back the college brochures that he left in the kitchen and says that he barely knows her and they shouldn’t “do this.” After she leaves Jeremiah and Evan fill Hank in on the new space in Ray’s building, Jeremiah thinks the dancers at the gentleman’s club are hard workers just like them. Ray comes out and has his chef join Ray and his party for dinner and publicly apologizes for breaking his nose.

Divya heads home and tells her manny that she thinks it is a good idea for him to take the class he was talking about. And, she reveals that she is going to cut back hours and just start working part time.

Ten minutes later Chef Frank comes back out of the kitchen and is wasted and jumps up on the table and starts dancing and singing. Ray tells him to get down and he falls on the floor. Frank dislocates and breaks his foot so badly that he doesn’t have a pulse in his foot. Hank breaks his foot back in to place and he is so drunk he barely notices.

Later that night Hank heads to the hospital and tells a sober Chef Frank that he has auto-brewery disease. His stomach is full of yeast from over-using antibiotics, so every time he eats any bread or pasta the over abundance of yeast gets him drunk. Basically, he is getting drunk from food.

Evan stays behind at the restaurant and has a few drinks with Ray. Ray informs him they are going in to business together and he is going to own 50% of their medical company since it is going to be in his building. Evan tries to back out of the deal, but Ray says it isn’t up for discussion.