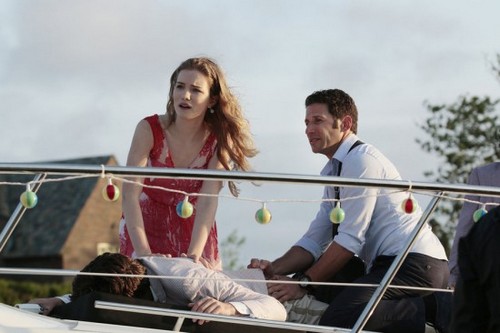 Tonight on USA Network ROYAL PAINS continues with another episode in its sixth season called, “I Did Not See That Coming.” On tonight’s show Divya bonds with a woman struggling to get pregnant while Hank pursues a romance with a woman he met in Europe.

On the last episode Hank and Divya treated a house-sitter in the Hamptons while Jeremiah grew closer to Viviana after helping her burlesque dancing friend. Elsewhere, Paige discovered something that could complicate her new business with Russel, and Emma contributed to the Hamptons’ hottest gossip site. Did you watch the last episode? If you missed last week’s episode we have a full and detailed recap, right here for you.

On tonight’s episode, Divya bonds with a woman struggling to get pregnant while Hank pursues a romance with a woman he met in Europe. Elsewhere, Divya worries about Jeremiah’s and Viviana’s growing relationship while Emma is invited to a hot party, and Paige, Evan, and Bob join forces to help resolve their issues with Russel.

Hank has a new girlfriend! And her name is Charlotte. The mysterious Charlotte appeared out of nowhere one day and it’s almost as if there’s history between her and Hank even though Evan can’t place her and Paige has never heard of her.

But it doesn’t take long, after her arrival, for Charlotte to wrap Hank around her little finger. The two were together during Hank’s year away with Boris and for some reason (not a good one) their relationship didn’t work out the first time. So Hank wants to give them a second chance.

He had fun with her while they were traveling the world and he desperately wants to recapture that now that he’s letting loose in his personal life. However Evan wants all the details. His brother doesn’t just date anyone – Hank can be kind of picky. Plus he’s curious about why Hank never mentioned her till now.

Not that they have time to sit around and gossip over espressos. The guys found out that their new sister has become something of a “rising star” in the Hamptons. Someone was bound to notice that she was showing up at all the hottest parties and the person that did also happens to pick what’s hot and what’s not for the young socialite set. So Emma, affectionately called Emma Who because no one knows where she came from, is the hottest thing and unfortunately for her brothers – rich guys are starting to take an interest. You know guys that can afford to cart Emma around in chauffer driven cars and send over a whole arrange of expensive clothes!

As for Charlotte, when Evan did get to meet her – he made a fool of himself. He was so hung up on her being blind that he mistakenly thought she was deaf as well. Which lead to him constantly tripping over his words. Yet that’s not even new either. Half of the reason he and Paige are still in therapy is Evan’s mouth. Sometimes he simply doesn’t think things through.

And when it’s not that then it’s when he often forgets that Paige might also have a point of view. She was so distraught over what her boss did (stealing his client’s historic rug) that what she really wanted from her husband is for him to listen to her before siding with her. It’s really not that hard!

Although the game Emma is playing is. The reason she became the IT girl is because her bosses at the gossip blog wanted her to be easily recognized and invited to all the good events, but they also want a returned bang for their buck. They want pictures of the elite behaving badly while all Emma wants to do is have some fun.

She got invited to a party hosted by this guy she’s could be interested in so she tried putting away her camera phone for once in order to be in the moment. Yet that moment was ruined when a friend of his slipped him drugs into his drink.

Cinco, who Emma was hoping would turn out to be Prince Charming, freaked out on her and came a little too close to doing her serious harm. So that made Emma feel a lot less guilty about all the photos she took at his party and was ready to sell. Though she did pause when he sent her an apology in the form of expensive shoes. And it also made Hank miss a crucial dinner date with Charlotte. He was the one that came to both Emma and Cinco’s rescue with medical bag when Cinco nearly killed someone.

They had broken up when he had stupidly asked if she would have surgery on her eyes. As a doctor – it was his curiosity that made him ask but it was her pride that made her break up with him. Then that all changed when she sought to get the surgery herself. She wasn’t doing it for him though. Charlotte looked into procedure for herself. She used to be able to see before a freak accident blinded her and she wanted to see if she can get her old life back.

But Charlotte changed her mind several times before finally going through with the surgery. She was scared of the risks and Hank had to remind her that she’s the biggest risk-taker he knows.

And speaking of risks, Jeremiah got to go on a date and, sadly, for him it might be their last date. The woman he likes is about to have her deportation hearing soon so unless he’s willing to move to Mexico then this relationship isn’t looking so good. Even outsiders thinks so. Divya wondered why Jeremiah was being so secretive and so spotting him with a pretty younger woman exchanging money spells out the wrong kind of story.