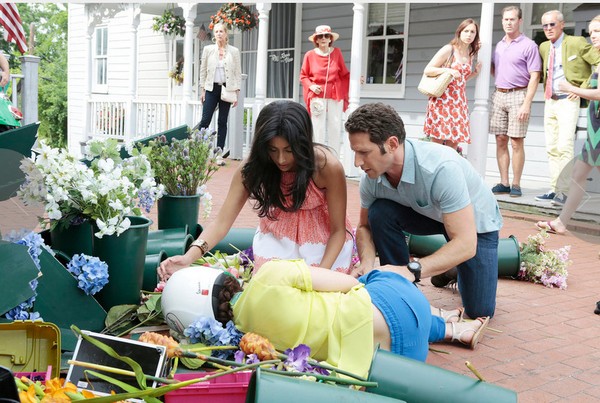 Tonight on USA Network ROYAL PAINS continues with another episode in its sixth season called, “I Did Not See That Coming.” On tonight’s show Evan and Ray hold a grand opening for their joint venture while Hank fears he is losing his sense of smell and prepares for a trip to New York with Charlotte.

On the last episode Divya bonded with a woman struggling to get pregnant while Hank pursued a romance with a woman he met in Europe. Elsewhere, Divya worried about Jeremiah’s and Viviana’s growing relationship while Emma was invited to a hot party, and Paige, Evan, and Bob joined forces to help resolve their issues with Russel. Did you watch the last episode? If you missed last week’s episode we have a full and detailed recap, right here for you.

On tonight’s episode, Evan and Ray hold a grand opening for their joint venture while Hank fears he is losing his sense of smell and prepares for a trip to New York with Charlotte. Elsewhere, a talented nail artist seeks medical treatment, and Emma is on the wrong side of Dr. Oz.

Since Diyva unexpectedly caught Jeremiah on his date – she’s been curious! This girl he’s been seeing has come out of left field and naturally Divya wants to know more about this mystery woman. However this is Jeremiah we’re talking about and getting beyond his tin man exterior isn’t always easy. So on Divya’s first attempt at being a snoop – she was shut down!

But chin up. Even if she is a failure as a friend (for not noticing anything outside of the baby universe she’s been occupying since her own little one was born) then at least she can make up for it by being a good physician assistant. Hank Med has just branched out into Hank Labs and literally on their grand opening – a new client fell right into their lap.

A perfumist, man who concocts perfumes for a living, collapsed on their site. And he’s going to need a few tests to be done before Hank can officially diagnose him with anything. Though his loss of spell is worrisome especially for someone in his profession.

Meanwhile Divya had to deal a sick manicurist. The woman developed a weird ongoing cough and so the two of them got to speaking during the check-up. And, well, one thing led to another and the manicurist admitted that sometimes she feels like a bartender as in people are willing to tell her their whole life stories. Nothing held back!

And the last part resonated with Divya because the few things she did manage to get out of Jeremiah was that this new woman he’s been seeing happens to be a bartender. So Divya decided to stop dancing around the mystery and/or problem and meet this woman in person. But, due to some confusion when they first met, Viviana lost whatever chance Divya was ever going to give her on getting accepted into their off-beat family.

Divya introduced herself as Jeremiah’s friend and that made Viviana assume she was the immigration lawyer that Jeremiah was promising to set her up with. Now remember, Divya hadn’t like seeing the money exchange between Viviana and Jeremiah earlier so that plus her assumption Jeremiah is funding an immigration lawyer all concluded in her mind to Viviana being a gold-digger!

So Divya warned her away and poor Jeremiah – Viviana made sure to stay away!

[10:04:43 PM] Kristine Francis: He was still trying to call her after she ignored so many calls that it was pretty obvious she was doing it on purpose. And while Divya was breaking Jeremiah’s heart – Emma learned the real price of fame by going through a heartbreak of her own. The Hamptons blog she’s been getting exclusive pictures for turned on her when she forgot to clue them in on a single dinner she went to. But, in all fairness, it was a dinner with Cinco, Paige, and Evan so it was more like a family occasion than it was an A-list event.

Yet that doesn’t seem to matter to people that refer to themselves as the “Snark”. They published an article claiming Emma’s five seconds of fame are up. And immediately after the article was published – Emma sought out validation from Cinco that she still mattered to him. She sent him text after text. All of which he ignored so she got payback.

Emma sent in a photo of Cinco being treated by Hank on his birthday after the young man started to freak out on bath salts. She did it when she was angry and then she conveniently forgot all about it when he resurfaced a few days later. He was on a boat and his phone died, but he got in touch with her the moment he could.

Neither of Hank Med’s patients are doing so well. Hank’s perfumist collapsed for a second time in how many days and Divya’s manicurist also started having problems with one of her five senses – like sight. The poor woman started losing her vision when she was on her Vespa and nearly collided with several pedestrians before a floral stand took her down. Hank and Divya quickly rushed to her side and thanks to some quick thinking on their part they were able to treat the stroke she was clearly suffering from (half her face went slack).

Afterwards Divya was feeling so proud of herself and yet Jeremiah came to her in near tears about losing Viviana. He wanted to know what he did or how terrible he must have been that he pushed someone he cared about so far away from him and even though she still felt like she was in the right – she explained to him that she told Viviana to back off. Divya tried to say that she interfered as his friend and that Viviana must have been defensive with her for a reason, but Jeremiah walked away from Divya not really caring about anything else she had to say. He just wanted her gone – he asked Divya to move out!

Hank was in the city with Charlotte wanting to be there for her as she went through post-op when Emma’s picture was published. Her boss was so vindictive about her being lackluster on her job that he used the photo to both smear Cinco’s and Hank’s reputation. He made it seem like Hank was the one administering the drugs instead of saving the trust fund kid’s life.

Will Emma continue sending him pictures or is she going to choose something else besides money?