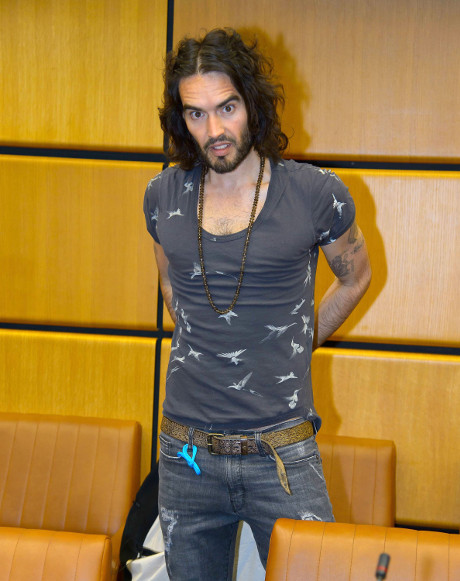 Russell Brand is apparently writing another book. It’s not a book filled with funny jokes from his stand-up routines or a memoir detailing his days a sex and drug addict. It’s not even a book based on his philosophies about life and faith. He’s already written those. The comedian has decided to try his hand at children’s books.

On April Fool’s Day, Russell announced in a video that he intends on releasing a series of illustrated children’s books called Russell Brand’s Trickster Tales.

“It’s coming out soon. Do you want it? You can have it if you want,” he said. “[Trickster Tales will be] where I do interpretations of fairy stories and folk tales, believing them to be the code to unlock aspects of our consciousness and to affect and impact the way we see the world,” Russell explained. “Once we start changing the way children see the world, well, we can do all sorts of stuff.”

The first book in the series is said to be The Pied Piper of Hamelin. The age-old legend has been around for centuries but Russell has written his own version. His Branded X version begins, “Once upon a time, long ago, in a time that seemed to those present, exactly like now, except their teeth weren’t so clean and more things were wooden, there was a town called Hamelin.”

Russell also introduced children’s books author and political cartoonist Chris Riddell as the illustrator of his future books. Russell has already penned three books. His first book, Articles of Faith, is a collection of articles he wrote for The Guardian and My Booky Wook and Booky Wook 2 are memoirs about his early career and struggles with addiction.

It’s still unclear if Russell’s announcement was just an April Fool’s joke. However, despite Russell’s rambunctious disposition and raunchy humor, he actually has some profound things to say if you take the time to listen when he speaks and read between the lines. Even so, children’s books might be too much of stretch for the comedian.

Will you read Russell Brand’s Trickster Tales to you children as bedtime stories or are we the ones being tricked? Let us know what you think and leave a comment.