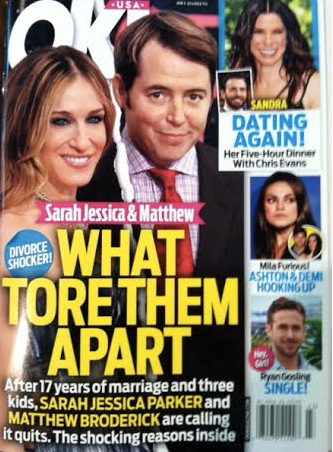 It’s been seventeen years of marriage for Sarah Jessica Parker and Matthew Broderick, but it hasn’t been a happy seventeen years, if rumors are to be believed. The couple has been plagued by cheating and infidelity rumors, rumors of constant fighting, and stories about their general unhappiness. Granted, a large part of that has to do with how miserable Matthew always looks during public engagements with Sarah, but honestly, that might just be his face.

Anyway, the latest cover of OK! Magazine suggests that Sarah and Matthew are finally calling it quits after all these years, even though they have three children together and they’ve already spent so many years battling through their problems. It’s like running a marathon and just when you’re nearing the end, you decide to collapse and give up. Where’s the sense in that? Yeah yeah, Sarah and Matthew want to be ‘happy’ and all that jazz, but after seventeen years of marriage, you’d think that something had to go spectacularly wrong for them to break up now, no?

Unfortunately, OK! simply references the allegations that Matthew cheated on Sarah way back in 2008, and how Sarah never really recovered from that ‘breach of trust‘. Uh-huh. And I suppose it took her 6 years to come to her senses? If anything, I would buy that Matthew was pushing for a divorce, not Sarah. And honestly, I think it’s unlikely that either one of them wants to separate now, if only because they’ve put way too much work into their marriage to give up and call it quits – especially for the sake of their children.

OK! also has a story on Sandra Bullock‘s unlikely new relationship with Chris Evans, and how the duo is ‘back together‘. Um, I didn’t realize they were ever together…? Chris has expressed his admiration for Sandra before, so I don’t doubt that he would be interested in dating her if she ever gave him attention. They would actually make an extremely attractive couple, albeit quite an unusual one.

Plus, Ryan Gosling is reportedly single after breaking up with his girlfriend of two years, Eva Mendes. This means that we’ll be treated to endless Ryan Gosling and Rachel McAdams fan fiction for the next year, at least.

Finally, Mila Kunis is supposedly ‘furious’ because Ashton Kutcher and Demi Moore are back in touch, and possibly hooking up. Yeah, right. There’s no way that Ashton would ever cheat on Mila, and that too, with Demi. The guy has hearts in his eyes every time he looks at Mila, and while that’s probably heartbreaking for Demi, he’s not going to go back to her just when he’s about to have his first child with Mila and get married to her.