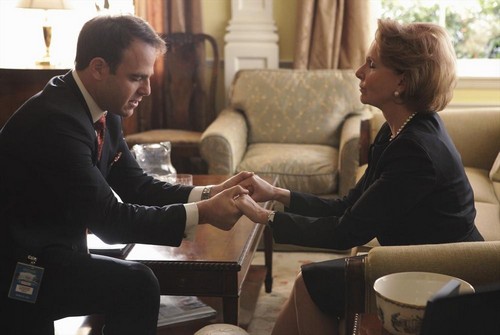 SCANDAL returns to ABC tonight with its Spring Premiere called, “Ride, Sally, Ride.”  On the next episode Sally Langston shocks the White House.  Did you watch the last week’s episode ? We did and you can catch up HERE

On the last episode before the winter hiatus the truth was out there, things will never be the same and everyone had to face the consequences of their actions.  The episode was written by Zahir McGhee and directed by Tom Verica.

On tonight’s episode the White House deals with a bombshell announcement from Sally Langston. Meanwhile, Olivia finds herself in a challenging new role.  Mellie Grant the First Lady and Olivia Pope have a sit down and Mellie tells Olivia in a very sarcastic voice to smile because, “the world is watching,” the camera pans on to the window where photographers are snapping pics.

Tonight’s episode looks like it is going to be a great episode and you won’t want to miss it, so be sure to tune in for our live coverage of ABC’s “Scandal” Season 3 episode 10 at 10 PM EST! While you wait for the recap, check out the sneak peek video from tonight’s episode below!

It has been a long time coming for Gladiators but finally Scandal has returned from its’ winter break and it’s back with a bang. The last time we saw VP Sally Langston she had just killed her cheating husband in a violent rage, realizing that she wasn’t so holy after all. Now she has decided to run against Fitz in the upcoming election as an independent. Olivia is officially Fitz’s new campaign leader and she is figuring out how to trouble shoot sally’s official press conference announcing her plans when the religious zealot throws everyone a curve ball. Not only will she run against Fitz, but she’ll continue on as VP as she does so.

When Sally killed her husband Cyrus was the first person that she called and James takes the audio tape of that call to David Rosen hoping that he can do something with it. The two butt heads as usual and accomplish little. Speaking of butting heads, Fitz wants a man named Andrew Nichols to run as his new VP. It’s not a popular move but no one can talk him out of it and his polling numbers are good.

Jake is now running B613 mainly because Fitz put him in that position. That means that Liv’s father is no longer chief in command and he is fuming. He tells Liv that Fitz should be very afraid and that if she is smart she will pick up her chips and run as fast as possible from the White House. He tells her to start grieving now because Fitz won’t make it to the end of his term.

The White House press corp is a vicious bunch and one of its members gets a text asking why Daniel Langston’s autopsy records are sealed and the seed is planted. This journalist asks the question and when Olivia overhears she realizes that there is dirt to find and tells her crew to start digging.

Charlie and Quinn are still thick as thieves and while Jake insists that she will never be B613, Charlie still has her picking out drills and kidnapping a little boy at school. He is the son of the coroner who autopsied Daniel. In order to keep her son safe she lies to Abby and Huck about what really happened to him. Rumors have surfaced about Liv screwing Fitz again so in order to shoot those down Mellie and Liv have dinner together. Photographers snap away as Mellie and Liv have a catty conversation that at least looks pleasant.