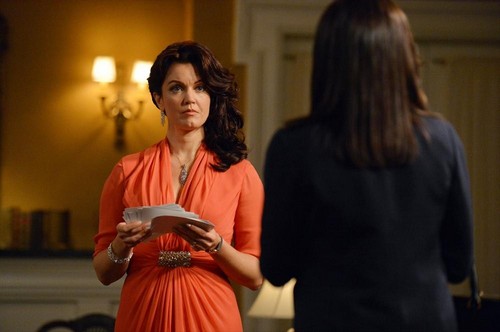 SCANDAL returns to ABC tonight with a new episode called, “We Do Not Touch The First ladies.” On the next episode Fitz is faced with the harsh truth.  Did you watch the last week’s episode ? We did and you can catch up HERE

On the last episode  the White House dealt with a bombshell announcement from Sally Langston.  It seems not only was Sally running for president against Fitz but she was not resigning her vice-presidency.  Meanwhile, Olivia found herself in a challenging new role.  Mellie Grant the First Lady and Olivia Pope had a sit down and Mellie told Olivia in a very sarcastic voice to smile because, “the world is watching,” the camera pans on to the window where photographers are snapping pics.  They are trying to put to rest the rumors that Olivia was Fitz’s mistress.

On tonight’s episode old feelings and jealousies arise at a Presidential event causing Fitz to face a harsh reality. Meanwhile, Quinn tries to prove herself to B613 and Leo Bergen sets up a meeting between Sally and an old friend.  Olivia’s father is out for blood.  Anyone of the current scandals could bring down the whole presidency.

Tonight’s episode looks like it is going to be a great episode and you won’t want to miss it, so be sure to tune in for our live coverage of ABC’s “Scandal” Season 3 episode 12 at 10 PM EST! While you wait for the recap, check out the sneak peek video from tonight’s episode below!

Tonight’s episode of Scandal begins with one hell of a fight between Liv and Fitz. They aren’t exactly alone either as various Secret Service as well as Jake stand in the hallway outside the office listening to them yell. As usual Fitz thinks that everything is about him but Liv sets things straight fast and informs him that she took the job as his campaign manager to restore her own sense of pride so that she’ll be known as something other than his suspected whore. Fitz apologizes and Liv goes on to defend having Jake by her side and she manages to avoid a kiss before leaving the office.

Meanwhile Mellie has issues of her own as she finds herself one-on-one with Andrew reassuring him that nothing is going to happen between them, again. I happen to like knowing that Mellie hasn’t been the most faithful wife either. It kind of levels the playing field between her and Fitz. Cy and Olivia realize that Andrew, Fitz’s pick for VP had a bit of a drug problem a few years back and they are going to have a really hard time keeping it under wraps. Liv and her team piece things together and realize that it looks like Rowan is the one trying to leak things about Andrew to the press to ruin the campaign. Live calls Jake and insists that her father is putting into affect a plan designed to ruin them all.

This is another of those episodes that gives us flashbacks of Mellie, this time with Andrew years ago. When she was dealing with being raped by Fitz’s father she downed a bottle of pills. It was Andrew who found her and saved her from herself. James meanwhile is in an utter panic because he fears that Cyrus is going to figure out that he is the the one prompting everyone to look into Daniel’s death. David attempts to calm him but that doesn’t seem to be working very well.

Liv meets with Rowan and gets nowhere with asking him to back down. She also notices Quinn outside watching them and decides to confront her. Liv gets into her car and asks Quinn to come home. Quinn explains that Huck licked her face like she was a piece of meat and then orders Liv out of her car. Quinn demands she leave a few times while threatening to shoot Liv and finally Liv goes.

Fitz is still trying to keep Andrew on the ticket while the other side digs up the doctor that supplied his addiction. Cy is doing everything to keep him from sitting for an interview. We also see in a flashback that Andrew might be the only one that Mellie told about the rape. She also confirms what I suspected- she has no clue who fathered her son, Fitz or his father. More flashbacks reveal just how much Andrew used to care about Mellie.

Cyrus informs James that he will know on this particular night who the source is that went to the press about Andrew and James scrambles to warn David. He leaves him a voice mail telling him that there is a set up and then we see David opening the trunk to his car before having a bag placed over his head and being crammed into his trunk. While in there he makes a phone call to Abby telling her that he loves her. The trunk pops open and Abby is standing there. She tells him she just saved his life and we then see that Charlie had been waiting for him.

Huck has been trying to apologize to Liv by bringing her coffee and finally he just says the words. She tells him that he went too far with Quinn. Huck tells her that he is a monster and monsters hurt things including people like Quinn. He continues to blame Liv for going to far with Quinn. Mellie runs into Andrew looking at a painting of Jackie Kennedy and the two end up sharing a kiss. Jake was told that he has B613 eyes inside the White House and sure enough Tom pays him a visit and drops a bit of software onto his desk. He uploads it and it gives him eyes inside. He overhears Fitz asking Liv if she has feelings for Jake and she’s not sure. The shocker of the night- Liv’s mom is back and one of her little helpers already found her way into the White House to mingle with Cyrus. Tune in next week for more Scandal.