Scandal Spoilers: Who Is The Real Father Of First Lady Mellie Grant’s Children, President Fitz Or His Father? 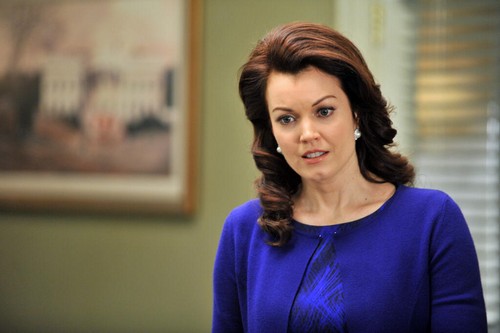 We are finally going to meet the children of President Fitzgerald Grant and First Lady Mellie Grant. However, the real question remains – who is their father?

Sure, Fitz is sleeping with Olivia Pope and his relationship with Mellie might not be all that great, but he’s had kids with Mellie that we’ve yet to meet. It’s been several seasons on the show, but the network’s finally cast the two teenage children who will be playing the First kids. However, there’s a potential scandal waiting in the paternity of those kids, especially since we found out a few episodes back that Fitz’s father raped Mellie. Fifteen years ago, Mellie spent a weekend at her father-in-law’s house, and he ended up raping her in a brutal flashback sequence. She decides not to tell her future husband, but ends up getting pregnant pretty soon after the attack – which means that the children really could be her father-in-law’s.

The rape is one of the reasons that Mellie started going cold towards Fitz, but obviously he has no idea of that. But will he ever find out that his son might actually be his brother? And if he does find out, what will he do? Will he get his revenge on his father? Will he stay silent out of fear of the scandal ruining his stint as president? Will Olivia get involved?

There are a lot of questions surrounding this latest development, but it really does make you see Mellie in a much more sympathetic light. The poor woman’s been living with this secret for the past fifteen years, and nobody should have to do that.

Let us know what you guys think is going to happen in the comments below.