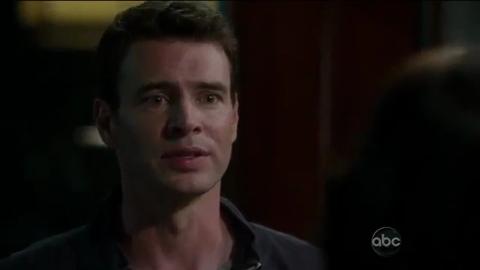 ABC’s Scandal sure knows how to pull off an epic cliffhanger. Fans had been warned that season 3 episode 13 of Scandal, “No Sun On The Horizon” would leave them reeling (check our recap here). Just when we all thought the “OMG” moment the Scandal team had promised would be Sally Langston being taken out via sniper rifle during her debate, she managed to reel in her craziness and unbeknownst to her, save her own life.

To our shock Sally made it out of “No Sun On The Horizon” without a scratch, the same cannot be said for James and David though. Since Olivia ran back to Fitz and shot down Jake’s plan to run away together and “be in the sun,” Jake put all of his energy into being the best B-613 Command he could be. He sent Quinn into Olivia’s office during the debate and stole the file on Daniel Douglas’ murder, and proceeded to clean up all the loose ends.

He arranged a meeting between James, David, the reporter James had been leaking formation to, and the woman that transcribed the incriminating text messages between Cyrus and Sally. While they all stood in the middle of the street trying to figure out who called the meeting, Jake ambushed them and fired three gun shots. He took out the reporter, the transcriber, and… either James or David Rosen. Unfortunately we won’t find out whether or it was James or David (or both??) until “Kiss Kiss Bang Bang” airs on March 20th.

ABC has released some spoilers for the all new episode, they don’t mention whether James or David are no longer with us though. According to the official “Kiss Kiss Bang Bang” episode synopsis next week on Scandal, “Sally sets a meeting with the NRA which sends the White House into a tailspin. Olivia and Huck come to shocking realizations and a surprising person asks for help from Pope and Associates.”

So Scandal fans, who do you think Jake dealt the fatal gunshot wound to, David Rosen or Cyrus’s husband James? Of course we have no guarantee that Jake hasn’t shot them both, right? Share your theories in the comment section below.