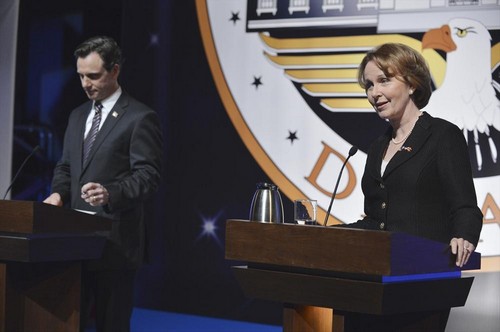 SCANDAL returns to ABC tonight with a new episode called, “No Sun on the Horizon.” On the next episode Fitz enters the first Presidential debate.  Did you watch the last week’s episode ? We did and you can catch up HERE

On the last episode  old feelings and jealousies arose at a Presidential event causing Fitz to face a harsh reality. Meanwhile, Quinn tried to prove herself to B613 and Leo Bergen set up a meeting between Sally and an old friend.  Olivia’s father is out for blood.  Anyone of the current scandals could bring down the whole presidency.

On tonight’s episode a well prepared Fitz gets thrown a curve ball during the first presidential debate, Olivia receives shocking news and is forced to make an extremely difficult decision, and the gladiators work with a powerful CEO accused of murder. Meanwhile, one dirty little secret could lead to deadly consequences.

Tonight’s episode looks like it is going to be a great episode and you won’t want to miss it, so be sure to tune in for our live coverage of ABC’s “Scandal” Season 3 episode 13 at 10 PM EST! While you wait for the recap, check out the sneak peek video from tonight’s episode below!

Tonight’s episode of Scandal kicks off with Reverend Dale, he is heading into Langston’s debate prep. Langston’s team is hoping that the Revered will be able to “fix her.” Meanwhile Sally is going head to head in a debate with Governor Reston and Fitz.

Olivia and her team are trying to make sense of Daniel Douglas’ death, and how it is related to James and Cyrus. They have audio tapes to prove it, Olivia isn’t buying it. She thinks if Cyrus had to cover up a murder, then he would have come to her.

Olivia pays Cyrus a visit and tells him she knows about Daniel Douglas. Cyrus tells her he has it covers. She begins sobbing and laughing hysterically. She thinks it is hilarious that “they’re all murderers in the presidential debate, it is literally made up of murderer row.” Olivia tells Cyrus that he stole Fitz’s opportunity to run a clean campaign, and she says Cyrus is “dragging her back into the dark.” Cyrus begs Olivia not to tell Fitz, and Olivia tells him she can’t do this again and he is on his own.

Abby brings Olivia everything that the team has on the Daniel Douglas murder, Olivia informs her to forget it, they’re not getting involved.

Olivia shows up at Jake’s house with a bottle of wine, having a mental breakdown. She tells him that she just wants to be a normal person for one night. Jake asks Olivia to run away with him and save him. She tells him to “take advantage of her” and then he kisses her.

Reverend Dale says his “work here is done.” Leo heads into Sally’s room, and she tells him the she confessed. And, now she needs to confess her sins to the world so that the Lord will take her back into his flock.

Quinn is having a tough time adjusting to her reception job at B6. Jake tells her that her job is to sell paper, only paper.

James pays Cyrus a visit, and Cyrus tells him “no matter what happens he loves him.” He tells James to go home. Cyrus meets up with Jake and tells him to “kill Sally Langston.”

James pays David a visit and tells him that “something bad is about to happen,” and they need to force the government to exume the body.

Jakes asks Cyrus if Olivia has anything to do with it. Cyrus says “no.” Jake reminds Cyrus it is not the role of B613 to get involved in some petty White House squabble. Cyrus reminds Jake that is Sally doesn’t go down, “faith in government will be dead.” Jake tells Cyrus “he is a mouse on a wheel” and he “doesn’t understand how the world really works.”

Cyrus barges in to Olivia’s office and tells her they have to cancel the debate, because Sally Langston is about to confess her sins on national TV. Cyrus breaks down and tells Olivia he needs her help.

Olivia pays Sally a visit to see exactly “what they are dealing with.” Olivia tells Sally she knows what is going on and that Sally plans to confess. Sally begins rambling about Jesus, and how he confessed instead of fleeing his fate and crucifixion. Sally says without God’s love she is dead, and she won’t get his love back until she confesses.

Olivia calls Fitz, and tells him that Sally Langston killed Daniel Douglas and Cyrus covered it up. She tells Fitz he needs to “throw the debate.”

Jake arrives at Olivia’s house with Chinese food for her. Jake wants to know what is going on with Sally Langston, and Olivia tells him she can’t talk about. Jake wants him and Olivia to “stop being these people and stand in the sun.” Olivia doesn’t respond and Jake says, “It’s too late, you’re standing with him aren’t you?” Olivia apologizes and Jake leaves.

Quinn pays Jake a visit, and he tells her that her “dues are paid” and he “has a job for her.”

It’s time for the debate, Sally is backstage on her hands and knees praying. Leo tries to talk some sense into her but she continues rambling prayers.

Fitz tells Olivia that he is not throwing the debate.

Fitz, Sally, and Reston all take the stage at their podiums. Meanwhile Quinn is ransacking Olivia’s office looking for her file on the Daniel Douglas murder. Quinn copies all of their tapes and documents and hands them over to Jake.

The debate turns to “morals.” Cyrus and Leo hold their breath when Fitz brings up her husband, scared that she is going to confess.

Jake sends an agent into the debate and tells him if Sally starts to go off script or falter he is to take her out with a sniper rifle. Fitz throws the debate and gives Sally an easy out, she becomes cocky and decides to stay on scripts and not confess.

The next day Cyrus hears a buzzing in his office, he realizes that someone has planted a microphone in the picture frame on his desk.

Olivia pays Fitz a visit, and tells him “there is no clean, just like there is no Vermont and this is how it works and how it has always worked. This is what it is, let’s stop pretending, and just be here.” Then she kisses him.

Cyrus heads home and breaks down to James, and says he knows he used him and he has a right to be angry. He tells James to “do whatever he wants with him, he is in his hands.” He tells James that he loves him more than anything.

James pays David a visit and tells him he is bailing on their plan. Jake arrives and shoots both members of David’s team, and then fired one more shot at either David or James…