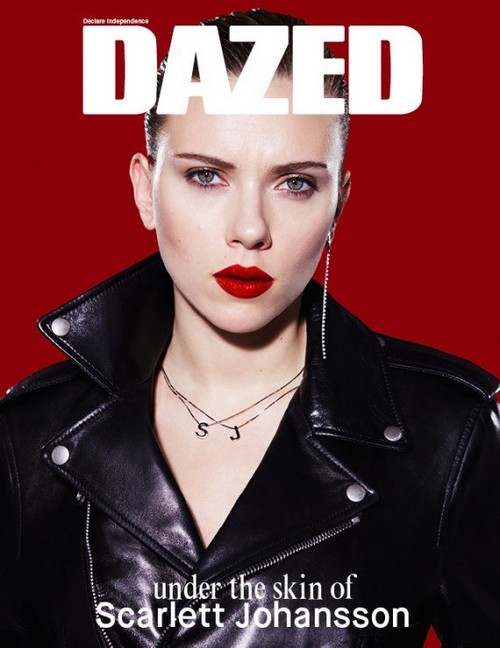 Scarlett Johansson covers the latest issue of Dazed Magazine, and while she spends most of her thoughts on Black Widow and the character’s transformation through the Marvel films, she also touches upon her relationships and love life. And whaddya know, she ends up sorta dissing ex-husband Ryan Reynolds in the process.

Scarlett is currently engaged to 31-year-old Frenchman, Romain Dauriac, whom she met last year and got engaged to after nine months of dating. However, Scarlett explains that she’s attached to Romain in a way that she wasn’t with Ryan, saying, “Look, I’m with a Frenchman. I think jealousy comes with the territory. But I’d rather be with someone who’s a little jealous than someone who’s never jealous. I didn’t think I was a jealous person until I started dating my current, my one-and-only… Maybe in the past I didn’t have the same kind of investment. Not that I liked my [former] partner less, I just wasn’t capable of it or caring that much.”

Ouch. She tries to cover up the diss, but the damage was done. It’s pretty obvious that she’s comparing her current fiance to Ryan, and she clearly still has ill feelings about her ex-husband.

Neither Scarlett nor Ryan were very forthcoming with what went down in their marriage and what caused their breakup, but it had to have been bad if they’re still on negative terms. I mean, why else would she basically admit that she never felt jealous with Ryan, even though she was MARRIED to him? And really, is her statement going to make Romain feel better? She’s saying that she cares now, but maybe if they get divorced in the future, she’ll be saying this about her next husband.

Either way, both Ryan and Scarlett have now moved on, but I’m starting to think there was a lot more behind their divorce than either of them let on – especially when she’s so obvious about her disses.