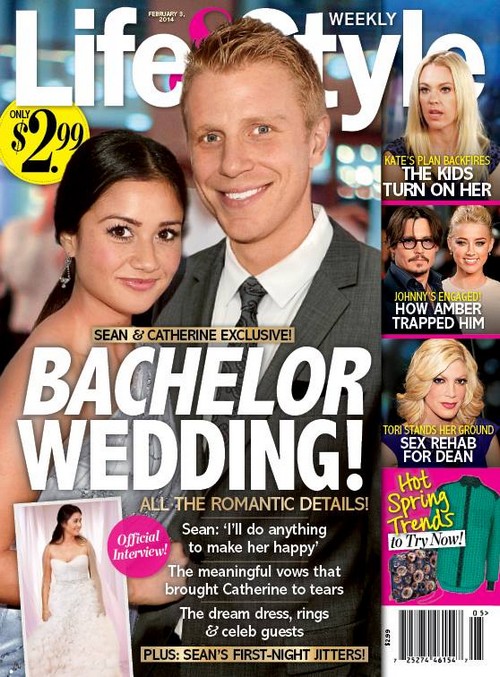 Cue the violins and saline tears, the big Bachelor wedding is almost here. Plastered on the recent Life & Style cover is Sean Lowe and fiancée Catherine Giudici posing like they are on top of a wedding cake above promise of romantic details of their upcoming nuptials inside the issue. The couple is set to wed this Sunday, January 26th on the same day that The 56th Annual Grammy Awards will air on CBS. This is fitting as their entire relationship is one big performance, albeit a performance more deserving of a Razzie Award than a Grammy Award.

Sean spilled to Life & Style, “Never in my wildest dreams did I think I would go on a reality show, meet my wife and go on to have a happy life. It’s incredible.” Um, you never thought this would happen? It seems he must have expected just that to happen. He was a contestant vying for a promise of eternal love with Emily Maynard during the eighth season of The Bachelorette after all. So when he went on to become the bachelor on The Bachelor, what was he looking for exactly if not to meet a wife? Perhaps he was looking for a roll in the hay with a hot girl in the fantasy suite?

Oh no. Wait. He wasn’t looking for that because he is a virgin. Riiiiiight. A handsome stud from Texas, who attended Kansas State University on a football scholarship, is a virgin? Sounds ridiculous, because it is ridiculous. There is no way he is a virgin, I mean what do you think college students at Kansas State University do for fun in their spare time? The explanation for this of course, is that Sean is a “born again” virgin, not a real virgin.

Not familiar with the phrase “born again” virgin? Wikipedia defines it as:

An individual can claim to be a born-again virgin, secondary virgin or renewed virgin if, after having engaged in sexual intercourse, s/he makes a commitment not to be sexually active until marriage, whether for religious, moral or practical reasons.

So he is claiming to not have had sex in a very long time basically. It makes you wonder what he meant when he told Life & Style of his relationship with Catherine that “[t]here were plenty of times we could have thrown in the towel and given up… But we didn’t. We worked on it every day.” What work? Certainly the work was not in the bedroom. Maybe it was through conversation over the dinner table and not on it. Thankfully they made it to this week and they are finally getting married. Poor Sean must be ready to make his grand return to the sexually active world with his lover for life Catherine.

Although maybe he isn’t ready, as the article claims Sean is having first night jitters. You know, because it will be his first time having sex in a long time. Like a virgin, Sean will feel like he is being touched for the very first time. Maybe the love birds plan to play some Madonna to put them in the mood. Meanwhile, if you want to hear more details of this crocodile teary eyed love story, go grab the latest issue of Life & Style and knock yourself out. Personally, we here at CDL have had enough of this ridiculous story. Don’t piss on us and call it rain. Call it what it is, like it is.