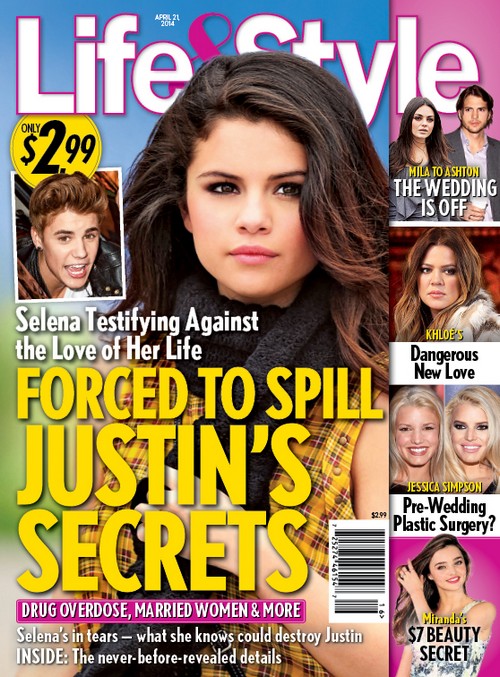 Selena Gomez and Justin Bieber may have a weird on/off relationship going on but the last thing that she ever wanted to do is to be forced to turn on him. It’s one thing if it’s her choice but totally a different story when someone else is looking for the bad stuff in her explanations. Unfortunately she really won’t have much of a choice because attorney’s in not one but two assault cases that have been filed against Biebs want to here what she has to say, under oath of course.

According to the April 21st print edition of Life & Style magazine Selena has been subpoenaed to testify because quite frankly, she probably understands how Bieber’s brain works better than anyone else. At this point in the game he comes across like an entitled, obnoxious kid that fully expects to get away with anything and everything. Selena can testify about Biebs dislike of the paparazzi in general and also those sparring lessons that he had from Mike Tyson. Even if she doesn’t intentionally throw Biebs under the bus it’s pretty likely that at least part of her testimony will be a damning experience.

Now that Mila Kunis and Ashton Kutcher have confirmed that they are expecting a baby later this year is the wedding off? Rather than rushing to swap vows have they instead decided to wait until after the baby is born? Speaking of vows, Life & Style has the latest on Jessica Simpson’s upcoming nuptials. Do you think that she and fiance Eric Johnson are really going to finally tie the knot or will they end up postponing it again? Tell us your thoughts in the comments below!