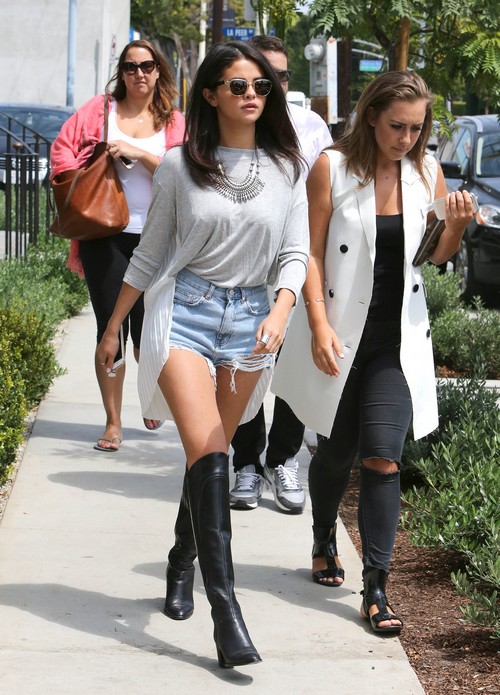 Okay folks, here we go again. Is anyone surprised to learn that Selena Gomez and Justin Bieber have reconnected? Of course you’re not, right? These two seemingly can’t stay apart for more than a few weeks at a time and then we learn of them hooking up. You know the drill right- they had a sleepover two nights ago and Selena is happy as can be but within two weeks Justin will be banging some random chick while she parties hard.

In the meantime, all is fabulous and Selena Gomez was spotted out in LA yesterday grabbing lunch with a pal who looks like an assistant. While both ladies were decked out in simple black dresses Selena appeared to forget to put half of hers on – thus the boob exposure. The top of it falls wide open in these photos and at one point she scrambled to cover up her breasts because of a clear cut nip slip. Lucky for Selena the paps missed that- at least as far as we know.

Have you guys noticed that right after Selena rolls around in the proverbial mud with Justin Bieber she dresses trashier? Seriously, while under his spell this chick seems to confuse sexy with whoreish. You don’t go to a restaurant for lunch with your breasts tumbling out of the front of your open dress- especially around kids- even if you are Selena Gomez, your boobs are not meant for public display!

Are you surprised that she suffered a nip slip here? Also, what do you guys think about Selena hooking up with Justin Bieber yet again? What exactly is it that keeps sucking her back in? Tell us your thoughts in the comments below!

Selena Gomez rocks a sexy black dress while heading to lunch with a friend on August 22, 2014 in Los Angeles, California. Selena worked up an appetite after spending the night with her on again boyfriend, Justin Bieber.