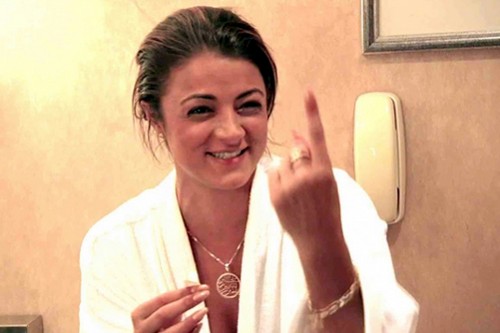 Tonight on Bravo SHAHS OF SUNSET continues with a new episode called, “Return to the Homeland Part 2.”  On tonight’s show GG and Reza must go to unusual lengths to solve their seasickness. Did you watch last week’s episode?  We did and we recapped it right here, for you.

On last week’s episode despite simmering tensions, the whole gang embarked on a vacation to Turkey to take part in Asa’s family reunion. While touring around the old city, Mike had a startling realization outside the Blue Mosque, and Reza wrestled with his identity as a gay man in a neo-Muslim country.

On tonight’s episode the group plans a yachting excursion on the Mediterranean, and GG and Reza must go to unusual lengths to solve their seasickness. Spurred on by her family reunion, Asa organizes a clandestine trip to the Iranian border for herself, her mother, and Reza, who are forbidden to return to the Homeland.

On tonight’s episode of Shahs of Sunset, Reza, MJ, Golnesa, and Mike are still on vacation in Turkey with Asa’s family for her family reunion.

The Shahs decide to head out on yacht to Princess Island. En route to the island Mike and MJ finally make amends, despite all of their arguing, Mike thinks MJ is “his sister.” They arrive at the island and head to an authentic Turkish restaurant. Reza is freaked out by the women that are wearing authentic Muslim veils. Asa is annoyed that Reza says their culture “freaks him out.” They begin bickering amongst themselves about whether Reza is or isn’t being disrespectful.

Reza and Asa discuss their trip in the morning. He is accompanying Asa and her mother on a plane ride to the Iran border. Once their plane lands they have to ride in a car for three hours, and they will arrive at a small city on the Iranian border. They can’t actually go into Iran, but Asa wants to be able to say she was that close to her homeland.

The next morning Reza, Asa, and Asa’s Mom wake up and board a plane before the sun even comes up. Their plane lands and they board a tourist van and head to the Iranian border. Asa’s Mom is so nervous about seeing the Iranian border she “has butterflies.” If Asa and her Mom get caught at the border they could be arrested by Iranian police because they are war refugees. Their tour guide points out the Iran guard towers up on a hill that they can see from the road. The guard tours have Iranian snipers up in the towers watching them. Reza is getting nervous because “Iran does not f—k around when it comes to their border, and their lives are in danger every step of the way.” Asa is getting emotional because she can only look at Iran, she can’t actually set a foot in it.

Asa, Asa’s Mom, Reza, and their tour guide arrive at the top of a hill. They park their van and walk across a large open field. Once they get across the field they see open hills and fields, but they can’t go any farther because that is Iran’s land. Asa’s Mom gets emotional because she can’t go into Iran and visit her Mom and Dad’s graves. Her Dad died after she left Iran and she was never able to say good-bye. Reza finds closure at the Iranian border, and all of the anger and rage he has had finally is slipping away.

Back in Istanbul, GG, MJ, and Mike are waiting for Reza and Asa to return to the hotel. MJ can’t wait until they get back from their pilgrimage so that they can share all of the details of their trip to the border with them. Reza and Asa finally return, and Reza has stones from the Iranian border that he brought back for Mike, GG, and MJ.

The next day the Shahs hang out with Asa and her Aunts, Uncles, and cousins in Istanbul. MJ has a revelation around all of the young children, and realizes that she wants children. She heads to the bathroom to cry, and Asa follows her to see what is wrong. MJ is scared that she is too old to have children now, and she actually wants children now.

MJ pulls it together and heads back to dinner with her friends and Asa’s family. Reza thinks this trip to Turkey has changed his DNA, and he will leave the country a totally different person. They all “cheers” to their trip, and Asa can’t wait to plan her next reunion with her family.