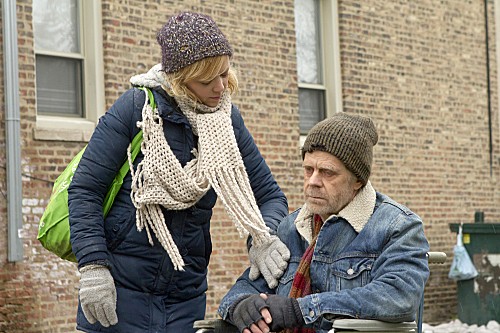 Tonight on Showtime their fiercely engaging and fearlessly twisted series SHAMELESS airs with a new episode called, “Iron City.”  On tonight’s episode Frank gets some sobering news.   Did you watch last week’s premiere episode?  We did and we recapped it right here.

On last week’s episode Fiona’s series of bad decision surrounding Robbie came to a boiling point. Meanwhile, Frank and Sammi searched for a cure to Frank’s liver issues and tried to catch up on missed father-daughter time. Lip got a surprise visit from Army investigators at college.  With construction in front of the Alibi Room decreasing the amount of patrons entering, Kev and Mickey finally open a brothel in the apartment above the bar. Frank is told that the claim for his broken leg will take up to a year to process

On tonight’s episode an accident lands Fiona in county jail. Frank gets some sobering news.  Lip will go on an big search for Frank. Fiona could do some major time even thought she pleads not guilty.

Tonight’s Shameless season 4 episode 6 is going to be great, and you won’t want to miss it. So be sure to tune in for our live coverage of Shameless — tonight at 9 PM EST!  While you wait for our recap, hit the comments and let us know how excited you are about the new season of the Shameless?

Tonight on Shameless, the aftermath of Liam’s accident lands Fiona in county jail, unsure of Liam’s condition or her own future. The family, minus Frank, wait nervously for any update on Liam;s status at the hospital.

The scene opens tonight with Kev offering the services of an attorney from his DUI case to help Fiona. Lip is in his own world and not thinking of anything but Liam’s condition and what will happen to the family. The doctor finally comes out asking for a parent or legal guardian to release the status of Liam’s condition to. After explaining the situation, the doctor finally relents and shares that Liam has acute cocaine toxicity with a dangerously fast heart rate. He is finally settling down. Everyone wants to see him but only family members over 18 can see him.

As this is happening, Fiona takes her seat in a jail cell. She asks to make a phone call but is denied and moved to a van to be transferred to Woman’s County.

Lip sees Liam, who is sleeping. He had several seizures and was strapped down. A pediatric neurologist will need to speak to the family about long term brain damage that could cause him more learning disabilities and problems. Lip is filling out paperwork and is forced to face the truth that he has to check no for insurance, job, etc. Kev tells Lip that he needs to wake up and face the severity of the situation. He is begging to help somehow.

Frank wakes up in the hospital with Sammi at his bedside. The doctor who sees him asks how he passed out in the sweat lodge. The doctor asks Frank if he realizes he is dying. Frank tries to joke it off. The doctor tells Sammi it will be very soon and that he does not have much time at all.

Back at the women’s jail, Fiona is going through the intake process but is still begging to make a call about Liam. She doesn’t get anywhere. Disrobed and shaking, she is searched, feeling degraded and scared. Back at the house, Kev and Veronica talk about the night before. Sheila awakes to her boyfriend’s sleeping nieces and nephews.  She continues to try to please her man and the kids.

Fiona finally gets in touch with Lip. He tells Fiona how Liam is. Fiona breaks down but Lip hangs up before she finishes talking. Lip is questioned on where his father is because he needs to be present to get Liam when he is ready to be released, otherwise Liam will go to foster care. Lip gets to see Liam again.

As Sammi is pushing Frank in a wheelchair after leaving the hospital, they talk again about her mom and how Sammi was conceived. Sammi talks him into considering a hospice.

Fiona is coached on the process for seeing the judge by a public defender. In court, the family awaits Fiona’s fate. Bail is set at $100 thousand. It is explained to the family that they need $10,000 to get her out. Kev and Lip start looking around for Frank.

Fiona finds out Liam is doing better after questioning her public defender. She tells Fiona if she gives the name of the dealer, she may catch a break.  When pushed about whether she’ll provide a name, Fiona says she cannot give that information. Sheila sends her boyfriends and family with lots of food as they head back to the reservation. Lip and Deb both rely on formers loves to provide some support during this tragically stressful time.

Back at the house after seeing some hospices, Frank is sleeping with Sammi by his side. She updates Carl and Lip arrives home and has a heart to heart with Carl after giving him a beer. Later, Lip is back at the hospital. His friend brings his books, some food, and a confidence boost when he sees his B+ grade.

Fiona’s first night is prison is cold and lonely. Her breakfast the next day is no better as she struggles to eat. A few minutes into her attempted meal, she is told she made bail and is released.  Carl called Mike and he is waiting outside for Fiona after paying her bail. He offers to take her home. Sheila says goodbye to her home and heads to the reservation to be with the man and family she loves.

Frank makes it to the hospital. Deb arrives after a night with Matt and learns she has a half-sister. Liam comes out but after seeing Frank’s condition the doctor and state worker are concerned. Fiona arrives home to an empty house. She starts getting worried after seeing the entire family is gone.