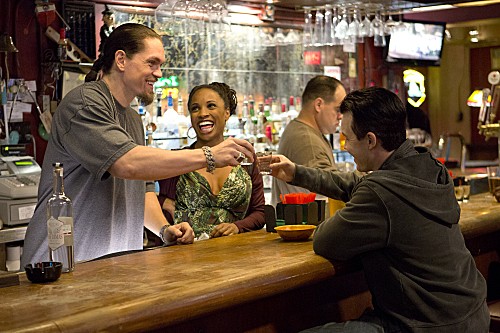 Tonight on Showtime their fiercely engaging and fearlessly twisted series SHAMELESS airs with a new episode called, “There’s the Rub.”  On tonight’s episode Lip gets a surprise visit at college.   Did you watch last week’s premiere episode?  We did and we recapped it right here.

On last week’s show against her better judgment, Fiona continued her secret affair with Robbie. The situation nearly boiled over when Mike showed up at Robbie’s apartment while Fiona is inside. Fiona was able to hide just in time before her infidelity can be exposed. Frank, in increasingly dire health straits due to liver disease, attempted to contrive an “accident” that will provide an ample insurance payout to cover the cost of a potential transplant.

On tonight’s show Fiona’s series of bad decision surrounding Robbie come to a boiling point. Meanwhile, Frank and Sammi search for a cure to Frank’s liver issues and try to catch up on missed father-daughter time. Lip will be getting a surprise visit from Army investigators at college.

Tonight’s Shameless season 4 episode 5 is going to be great, and you won’t want to miss it. So be sure to tune in for our live coverage of Shameless — tonight at 9 PM EST!  While you wait for our recap, hit the comments and let us know how excited you are about the new season of the Shameless?

Tonight on Shameless, Fiona’s series of bad decisions involving Robbie finally boil over. Meanwhile, Frank and Sammi pursue a cure for Frank’s liver trouble and try to catch up on missed father-daughter time; and Lip gets a surprise visit at college from Army investigators.

Tonight’s episode begins with Fiona meeting Robbie in a last ditch effort to get him to stop calling and texting her. He shows her the pay-by-the hour hotel he’d like to take her to. Later, Fiona deletes Robbie from her cell phone, but not her life as she finds out he is on the guest list for a dinner with Mike and his family. Later, at dinner with Mike’s family, Fiona has to play it cool when in the room with the brothers. The brothers have an argument and take it outside. They begin to fight and Fiona freaks out that her secret is out. She doesn’t get any details before being asked to leave by Mike. Fiona shows up at Robbie’s to find out what happened. He admits he told Mike about them. Fiona attempts to call Mike to find out her work status. Fiona shows up to work and gets presented with a birthday cake. She attempts to talk with Mike after the makeshift party. She opens up to Mike about why she slept with Robbie. Mike tells her he is sorry for not being more interesting. Robbie later shows up to her house, coke in hand, wanting to party a bit with Fiona. Fiona kicks him out, but the baggie of coke still sits on the table. Fiona, Deb, and Kev start partying, each doing a few lines. Debbie and Lip get back. Debbie screams as she finds Liam in the kitchen with his face full of that was left of the cocaine. Ambulances and paramedics arrive and Fiona is forced to tell them he got into her coke. The tragic scene ends with Liam being taken away while everyone is left scared and shocked. Later, they all wait in the hospital waiting to hear something. Police arrive at the hospital to arrest Fiona. As she sits in back of the police car, she loses it as she worries about Liam, her arrest, her job, losing Mike, and custody of the kids because of yet another mistake on her part.

Lip, sitting on the toilet, gets accosted by Army personnel about his connection to one of their own who is using Lip’s identity for criminal acts.

Sammi discusses her disappointment of finding out Frank was her dad, because she’d had more sexual plans in mind. She also laments that he didn’t even attempt to find her because she was his daughter, but because he needed something from her. After a heart-to-heart, they seem to get along wonderfully as she assures him she will help him get the money he needs.

Kev is beyond angry about the construction being done in front of the bar because of the impact it will have on business.

Sheila is at the house as Lip arrives, getting dinner ready for the date she plans to entertain while babysitting the kids. Lip asks about Ian and whether or not any men from the Army have dropped by. When Debbie asks why, Lip explains that Ian is using his identity in the Army but got caught stealing helicopters. Lip sets out, with Debbie’s help, to find Ian. The two find an old lover of Ian. Harry Hamlin plays the part of Ian’s jilted lover. He gives Lip and Debbie the address where he believes Ian can be found. Debbie opens up to Lip about her former boyfriend and attempts to seem older than she is. They continue to track down Ian and their latest clue brings them to a gay club. Ian is found, make-up on and dressed to thrill, working behind the bar. Ian downplays the problems he’s caused and Lip and Debbie get kicked out when they attempt to talk to Ian.

After Frank shows his x-ray of the bad break in his leg, he is told that he’ll easily get 100,000 for the injury, but not for 16 months, which he is scared will be too late for his liver. He heads home and talks to Sheila and her Native-American boyfriend. After hearing about some of the man’s tribal practices for healing, Frank decides he wants to try a liver cleanse and they all toast to it. They spend much of the rest of the episode planning for the liver cleanse because of all the crazy items they need to perform the ceremonial cleansing. The police show up during the sweat cleanse and Frank appears passed out.

Mickey’s plan to help his wife and the girls that forced them to leave Sasha is making things too uncomfortable at home as Mandy comes home to find her man with one of the “workers.” Kev, meanwhile, is planning a creative way to add to their failing business by using the women for a “Rub and Tub.” Kev gets surprised when throwing out the trash. He decides to use the demand for a payment on his loan to introduce his new business and offers hand jobs for the guys ready to pounce on him. BY the end, the bar is jumping and the girls are happily working again.