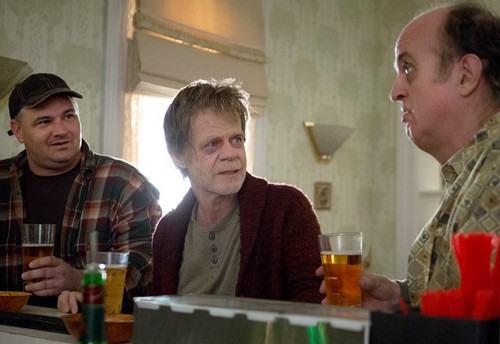 Tonight on Showtime the uniquely twisted and highly entertaining show SHAMELESS returns with another winner of an episode for fans to enjoy. In “Liver, I Hardly Know Her, ” Fiona goes wild and violates multiple terms of her probation by partying with Robbie’s degenerate friends. A search for her gets underway when she fails to contact anyone.

On last week’s episode Carl has a connection with a troubled girl. Fiona struggles to find a job.   Lip and Amanda grow closer; Sheila returns with big plans; Fiona searches for a job; Mickey spends time with Ian.  Did you watch last week’s premiere episode?  We did and we recapped it right here.

On tonight’s episode in detention, Carl shares a connection with a troubled girl named Bonnie. Lip grows close to his roommate’s now ex-girlfriend, while Debbie sets out to make life miserable for the new girl in Matty’s life. Sheila returns from her trip to the reservation with big plans to adopt the Native American kids. Fiona experiences the struggles of job-hunting with a criminal record, while Mickey ignores the birth of his son to spend time with Ian, whose behavior is becoming increasingly erratic.

Tonight’s Shameless season 4 episode 10 is going to be great, and you won’t want to miss it. So be sure to tune in for our live coverage of Shameless — tonight at 9 PM EST!  While you wait for our recap, hit the comments and let us know how excited you are about the new season of the Shameless?

In the opening scene Fiona lets loose when Robbie has a party filled with drugs, alcohol, and sex. She does lines, drinks, and dances with her monitoring bracelet on her ankle. She passes out on the floor after hours of getting crazy.

Frank is not doing well at all. Carl comes to visit and sees him in grave condition. Sheila is still planning her wedding to frank. Sammi tries to tell Sheila that the wedding is not going to happen. Sheila gets upset when Sammi is her Debbie Downer. Sheila is clueless as to Frank’s condition because she still thinks she can help him with a cleanse. Sammi lets her know Frank cannot even swallow. Kev holds V’s hand while she is in labor. She asks for Fiona and Kev tells her he left a message. Kev tries to keep V calm.

At the house Ian and Mickey are eating breakfast when Debbie comes down and tells them Fiona never came home last night. Debbie looks for a knife to keep on hand in case she has another run-in with Matty’s girlfriend. Meanwhile, Lip arrives back at the dorm after finishing a test and shares that he was told by Deb that Fiona never came home last night. His creepy new girlfriend (or hook up), Amanda, keeps up the stalker activity by making him a laminated schedule to match the schedules she made him and posted on the wall detailing his days in five-minute increments.

When Sammi and Sheila meet with a drug dealer, they are told by him that he knows a guy who does liver transplants on “the side.” The ladies get excited and begin to plot. Later, they meet with the down-low doctor and are given details about the surgery, which would cost them $25 thousand dollars, plus $5 thousand for the liver. The ladies try to bargain for a $26 thousand dollar deal. The doctor accepts the deal. The ladies are told the doctor does not oversee the recovery. After Sammi thinks Frank is dead, the ladies don’t hesitate and go after the doctor for the transplant.

Fiona wakes up and is told she took ecstasy. Her monitor is beeping but she is too drugged out to even realize what is going on. Shortly after, she wakes up again in the back seat of a car and begins throwing up, still looking very dazed.

Bonnie and Carl walk home from detention together when he shares that his father is dying. Bonnie suggests they do something to “take their mind off it” then proceeds to break a car window so that she and Carl can steal it. When Lip comes in, Bonnie is waiting in the stolen car to pick up Carl. He takes off as Lip is still talking to him. Mandy is staying at the Gallagher’s house after being beaten by her boyfriend. Debbie takes care of Liam and she and Lip talk about how worried they are about Fiona. Ian gets home and shares that he looked around everywhere and hasn’t found her. They try to figure out where she should be when Deb reminds them about Robbie.

Back at the hospital, V and Kev talk about Fiona not coming home and Kev tells V he’ll check on her when he leaves to go buy diapers, wipes, and all the things they’ll need for their twins. V’s mom comes to visit them in the hospital.

Ian and Deb got to Robbie’s looking for Fiona. He wakes up and has no idea where she is at. They see her shoes, coat, and phone there. When they see she is not there, they take off looking for her.

Kev goes after Mickey for the money he took from the register, using Mickey’s gun on him. Meanwhile, Bonnie and Carl look at various hospitals for Fiona. Bonnie shares her personal life with Carl and tells him how her father is in jail. Bonnie drives the car through a mini mart window and begin to steal all they can.

Fiona wakes up again, seriously dazed with no idea where she is at. The van she is in is stopped at a gas station/mart and she gets out to go in the bathroom. She looks at herself in the mirror and begins to cry. When she comes out of the bathroom, the van with the guests from Robbie’s party take off without her. She is alone with nothing. A nice man sees her outside and allows her to use his phone. She calls Lip but he doesn’t answer..he has earphones on while studying. She leaves him a voicemail begging for him to help her. Lip finally calls and ends up going to pick up Fiona. She cries in his arms and apologizes.

Sheila and Sammi drop off Frank to the warehouse-like makeshift hospital. After the surgery he is still out and the ladies are told to call 911. An ambulance comes to pick him up. They tell the EMT that Frank had the procedure in the basement a few moments ago and he cannot believe his ears. Frank is not doing well at the hospital. The ladies are told that Frank did NOT have a liver transplant. Instead, he had a kidney removed! Sheila STILL has marriage on her mind and asks Frank to marry her. She thinks he says he could not be “more thrilled,” but clarifies to Sammi that he wants “more pills.” Now Frank has his old liver, is missing a kidney, and they are out $26 thousand dollars.

Deb and Ian open the door to a police officer and Fiona’s probation officer. They ask if they have seen Fiona and Deb tries to cover. They don’t believe her and advise them they’ll be looking around the house.

Bonnie takes Carl to meet her mom and see where she stays..in a van. He gets a text that Frank is dying AND getting married. He asks Bonnie to join him for both events.

Ian and Mickey find Mandy back with her abusive ex and Ian tries to pull her away from the house. She slaps him and her boyfriend gets up to step in. Ian grabs a knife and holds it to his neck when Mickey tell him to put it down. They leave to avoid any further problems.

Lip and Fiona have a heart-to-heart in the car. He tells her he wishes he was there for her more. Deb calls and talks to Fiona. Meanwhile, Kev and V are struggling with the crying babies. Kev goes outside with his gun to warn some prank-playing kids. He trips upon walking in and the gun goes off. He doesn’t shoot anyone, but V is so freaked out she makes him promise no more guns.

The family goes to visit Frank in the hospital to give their final goodbyes while Sheila is dressed in her wedding dress and has gotten the priest to come to the hospital bed to marry her and Frank. Before the ceremony ends, the doctors rush in and pull him out, explaining Frank is getting his liver!

In the last scene Fiona meets with her probation officer and is asked to tell her what happened. Next week should be really good as we get closer to the season finale.