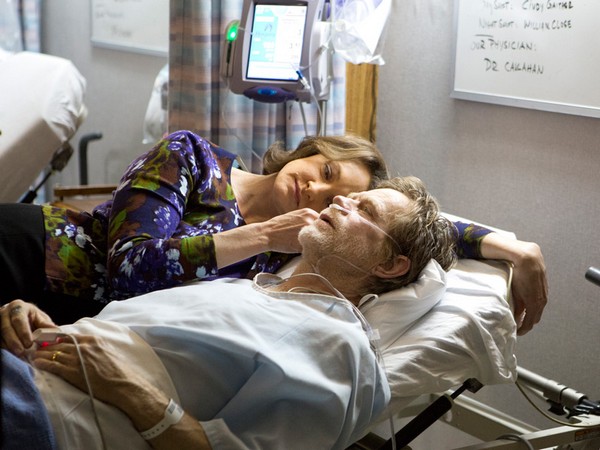 Tonight on Showtime the uniquely twisted and highly entertaining show SHAMELESS returns with another winner of an episode for fans to enjoy. In “Emily,” Fiona is taken to a correctional facility; Frank wakes up from his operation suffering from post-operative delirium; Ian crashes the christening for Mickey’s son; Amanda’s parents bribe Lip to stay away from their daughter; Debbie meets an older student with a dark ulterior motive.

On last week’s episode in detention, Carl shared a connection with a troubled girl named Bonnie. Lip grew up close to his roommate’s now ex-girlfriend, while Debbie sets out to make life miserable for the new girl in Matty’s life. Sheila returned from her trip to the reservation with big plans to adopt the Native American kids. Fiona experiences the struggled of job-hunting with a criminal record, while Mickey ignored the birth of his son to spend time with Ian, whose behavior was becoming increasingly erratic.  Did you watch last week’s premiere episode?  We did and we recapped it right here.

On tonight’s episode Fiona is hauled off to a correctional facility. Amanda’s parents bribe Lip.  Lip invites Amanda and her parents over for dinner.  nd Frank Gallagher experiences some memory loss when he wakes from surgery.

Tonight’s Shameless season 4 episode 10 is going to be great, and you won’t want to miss it. So be sure to tune in for our live coverage of Shameless — tonight at 9 PM EST!  While you wait for our recap, hit the comments and let us know how excited you are about the new season of the Shameless?

In the opening scene Fiona is on a bus headed to a correctional facility three hours away and chats with her seatmate who shares that she murdered her ex-boyfriend’s girlfriend’s baby in utero.

In the hospital, Sammie and Chuckie visit Frank and talk with a little girl who is hoping for a heart transplant. She shares with her new friends that her dad left her and her mom once she got sick. Sammie and the mother of the little girl bond about their dysfunctional families.

At the Gallagher house, Carl asks Ian if Mickey is his boyfriend after finding him sleeping in his bed. Carl shares that he has a girlfriend. Mickey tells Ian that he is going to see his baby. Ian wants to go along, but Mickey doesn’t think it is a good idea, so the two argue.

Lip gets back to the dorm only to be welcomed by his stalker girlfriend Amanda, who is checking his grades online for him. She offers to satisfy him quickly before he takes off again. He shares that he cannot make it to meet her parents tonight. She goes off because they had an arrangement that he committed to. He doesn’t change his mind and offers to take her to lunch the next day to meet her parents. She tells him they will be gone and storms out telling him that he is a not a man of his word.

Back at the hospital, Sheila comes for a visit and Sammie shares that he has still not woken up. Sheila brings all the kids and is resorting to extremes to get him to wake up, even trying to mount him! The tension between Sheila and Sammie is mounting as Sheila continually ignores Sammie’s requests to leave Frank alone. Sheila attempts to “wake Frank’s spirit” by performing a tribal dance. Frank wakes up finally, after Carl arrives and hits him where it hurts. He is confused and doesn’t seem to recognize anyone. He is delirious. After visiting hours end, Frank wakes up and is still out of it. He thinks the girl in the bed next to him is Fiona as a little girl. He is hallucinating, and talking to her like she is Fiona. The sweet little girl plays along and calls him daddy and holds hands across beds with him.

Lip is upset that Amanda said he is not a man of his word, so he shows up during a lecture in her class and announces in front of everyone that if she truly wants to shock her parents they should come for dinner at his house. Then he offers his address on a paper that he gives to someone to pass to Amanda.

Mickey arrives at his baby’s christening when Svetlana admits to him she talks to his father almost daily and planned on him attending. Before the ceremony begins, Ian arrives as well. Later, at the party after the ceremony, Svetlana tells Mickey she does not want Ian at the party and demands that he make Ian leave. When he tells Ian, he gets so upset-they argue. Ian tells Mickey that if he makes him leave, he shouldn’t bother coming home. He is tired of living a lie. Just then, Mickey’s father arrives at the bar. He and Svetlana keep fighting. Ian tells Mickey he is leaving. When Mickey tells him he’ll see him at home, Ian tells him not to bother because they are over. When Mickey chastises Ian for being too emotional, Ian retaliates and calls him out for being too scared to be who he really is. He says he is tired of being a “mistress” and leaves Mickey at the bar. Mickey is visibly shaken. Before Ian leaves, Mickey gets everyone’s attention at the bar and announces that he is gay. Everything is calm for a moment, until Mickey’s dad goes after him in a rage and a whole bar brawl ensues. Mickey and his dad both get arrested as his dad continues to shout gay slurs. They throw the father in the car and remind him he broke probation. Mickey gets his handcuffs taken off as the officer tells him it would be too much paperwork for him to complete if he arrests him, and he wants to get home to his husband.

Meanwhile, Bonnie and Carl are continuing on their crime spree breaking into a vending machine. Deb flirts with a classmate. He definitely likes Deb and they work closely in science lab as partners. He tells her he wants to kiss her after class. They make plans to meet up later.

Lip arrives home and starts getting dinner ready…warming up lasagna that he stole from school. Meanwhile, Deb is at school and is making out with her new “boyfriend.” He attempts to go farther and she doesn’t want to. He tells her they can wait for the dance to go farther. She is excited that this means an invitation to the dance. After he tells her that he is going to take her to the dance, he takes her unbuttoned top down. Just then, at the top of the stairs, a bunch of her classmates are taking pics with their phones. Deb’s nemesis (Matty’s girlfriend) set her step-brother up to pretend to like her. All the kids are laughing at Deb as she runs out.

Back at home, Lip finds a bunch of random kids in the house. Carl and Bonnie brought Bonnie’s siblings over since she wanted to hang out with Carl and she could not leave them at the alone in the van they live in. At first, Lip tells Carl to have them to leave, but then remembers Amanda’s family is coming so allows them to stay and act wild. Just then the doorbell rings, but it is not Amanda, it is DCFS there for a surprise visit. As she walks through she makes lots of notes and tells Lip all the things he must fix. Just then, Amanda and her parents arrive. Amanda, who is Asian, tells Lip she forgot to mention she’s adopted as she announces her parents, “there are my parents. They’re white.”

Fiona, meanwhile, is getting adjusted to her new home. She has to share a room with lots of other women who are not exactly very welcoming.

Matty comes over to see Deb and finds her looking through the pictures she was sent that are circulating all over school of her with her top off. Matty tells her that he broke up with her over it. He tries telling Deb that things will blow over in an attempt to make her feel better. He asks her to the dance.

At dinner, everyone is eating when Lip goes to check on the DCFS officer and seems to get an “okay” report as she is pleasantly surprised that he is trying to help the kids who live in a van. Amanda’s parents offer to bribe Lip to leave her alone. It seems, though, that Lip may be falling for her. Lip tells Amanda. When she asks if he took the money, he asks her what she thinks. She believes he did. He agrees and she is upset and leaves with her parents. But….a few minutes later, Amanda comes back. She and Lip had a plan. Lip got the 10 grand AND Amanda! They planned everything. Amanda told him he should have held out for the 15 thousand they gave her ex! The two run upstairs to celebrate!

Frank gets hungry and leaves his bed to go to the cafeteria and steals food off the plate of a couple doctors. When he gets back to his room, he sees the little girl being wheeled out after learning she passed away. He cries thinking it is Fiona.

Fiona is learning how back jail can be as she is forced to use the bathroom and shower with all the other prisoners.