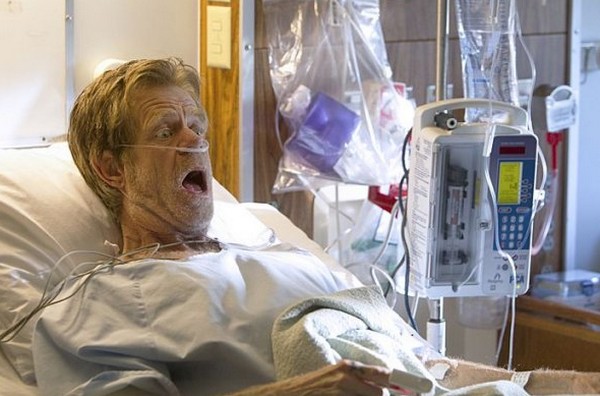 Tonight on Showtime the uniquely twisted and highly entertaining show SHAMELESS returns with another winner of an episode for fans to enjoy. In “Lazarus,” season 4 ends with Sheila fighting for custody of the Native American kids and clashing with Sammi over where they will all live once Frank is released. Meanwhile, Fiona passes a drug test, gets released from jail and lands a job at Patsy’s Pies with the help of her parole officer; and Frank begins to feel again like his old, troubled self.

On last week’s episode Fiona washauled off to a correctional facility. Amanda’s parents bribe Lip.  Lip invited Amanda and her parents over for dinner and Frank Gallagher experiences some memory loss when he woke from surgery.  Did you watch last week’s episode?  We did and we recapped it right here for you.

On tonight’s episode Fiona gets out of jail. Frank Gallagher is feeling like his old self again! However, he’s got a handful of news coming his way. First, he finds out he’s married to Sheila Jackson! How will he react to that!? And even more so, how will he react to learning he can’t drink alcohol!? Will he be boozing regardless? We all know Frank doesn’t like listening to “the man” or in this case, his physician!

Tonight’s Shameless season 4 finale is going to be great, and you won’t want to miss it. So be sure to tune in for our live coverage of Shameless — tonight at 9 PM EST!  While you wait for our recap, hit the comments and let us know how excited you are about the new season of the Shameless?

Tonight’s season finale starts with Frank waking up in his hospital bed. When Frank starts moving around, Sammi starts asking him questions to see if he is okay. He finally remembers everyone as it seems his delirium is now gone. He asks for morphine. Frank is shocked to find out he is married to Sheila. As Sheila leaves the room to go get the kids, Sammi informs him that he now has five new Native American children.

Lip goes to wake up Carl and finds that Bonnie spent the night with him. Carl tells him not to worry because Bonnie doesn’t want to have sex. Lip tells Deb that he got some money from Amanda so they can pay some bills that they are behind on. Carl and Deb want to visit Fiona. Lip tells them they will go on the weekend. All of Bonnie’s family is still at the house. Amanda and Lip take everyone to where they need to be before heading to school themselves.

Fiona is adjusting to her new digs when another inmate, who has taken a liking to her, leaves her with a pill that will “make her day go easier.” While working in the laundry area, Fiona is stopped and asked to submit to a drug test. Later, her probation officer comes in to a meeting room to talk with her. She asks her questions about how she’s been doing and takes her urine sample away to test it. The officer comes to get her and tells her to follow behind. Fiona is worried that someone set her up because she pleads that she did not take anything. As she passed the girl who gave her the pill, Fiona told her she didn’t take it. At the end of the long hallway the officer tells her she is released and free to go. Her probation officer waits for her outside.

Svetlana greets Mickey as he wakes up. She offers him the chance to have sex with her in a way where she can “accommodate” his preference for men. After getting turned down, Svetlana shares she is bisexual and wants another woman to come live with them as the woman wants to take care of her. She demands that Mickey help with the baby more. Mickey goes back to the bedroom to Ian who is hiding under the covers and not responding to him as he tells him to get up. After getting ignored despite his continued attempts to get an answer, Mickey walks out upset. Mickey goes to the bar and is made fun of after hearing a gay joke. He yells that he is ready to fight anyone who has a problem with him. Kev makes light of the situation by calming everyone down and just making light of the situation. When Mickey returns home, Ian is still in bed and looks out of it. When Mickey continues to ask what is wrong, Ian finally blows up and tells him to leave him alone.

Back at the hospital, Sammi is irritated with Sheila as she disciplines Chucky. Sheila tells Sammi that she needs to find someplace else to live because now that Frank and the kids are all moving with her back into the home, there is no room for her. After Frank returns from a walk and is having his staples removed, the doctor shares with him that he can no longer drink after Franks asks how long he’ll have to wait to begin drinking again.

Later at the house, Bonnie and Carl are drinking beer. The kids are still there because Bonnie’s mom is gone again. When Carl gifts Bonnie with a piece of jewelry, she asks him if he is falling for her and warns him against it. He is surprised and very let down, but tries not to let on. She takes off in a hurry with her siblings in tow.

Fiona gets some advice from her Probation officer as she drives her to her new place of employment at a pie shop. She is given the rundown from the owner and tells another server to get her ready for her first shift. Meanwhile, Sheila is at a hearing trying to attempt to officially adopt the kids. After much debate among the panel who decides, Sheila is told she cannot adopt the kids and that they will be placed with their grandfather. Surprised they have a grandfather she asks the oldest boy why he didn’t tell her. He responds that his grandfather did not have wi-fi.

Later, Mickey shows up at the Gallagher house asking for Lip. When Carl shares that he is not there, Mickey tells them that Ian is not responding to him. Carl and Deb come with Mickey to his place to try to talk to him to figure out what is wrong. Mickey asks if they can tell what is going on when he doesn’t respond to them either. Deb says that she is familiar with it.

After attending a special event with Amanda at her request, they head to get something to eat. Wearing a very expensive suit that Amanda bought him, he sees his former love Mandy working there. He makes small talk with her after faking a bathroom run. It is obvious in the way they look at each other that there are still feelings there.

Fiona returns home, but no one is there. She walks around the house looking around. The next morning, Deb wakes up to Fiona making breakfast. They cry in each other’s arms. Carl comes running in as well, followed by Liam. Later, they bring Fiona to see Ian. He won’t respond to her too. Fiona shares that she thinks that maybe Ian is bipolar like their mother. Mickey goes crazy saying that he doesn’t want him going anywhere and that he wants to take care of him himself.

Carl goes to the parking lot where Bonnie and her family live. Their normal spot is empty and he is crushed. That morning, Fiona shows up to work. Meanwhile, Sammi is stopped when she tries to visit Frank in the hospital because she is told Sheila requested she no longer be allowed to visit because she upsets Frank too much. She argues, then fights to see her dad, yelling for Sheila. Security comes to escort her out. Carl is still there and goes to see Frank. Carl takes Frank, who is in his wheelchair and asks him if he is ready to go. He says he is ready to go. Sammi finally breaks free and she and Sheila both rush into Frank’s room, only to find he is not there.

Fiona and Lip talk about their family issues and Lip gives Fiona an update on how he is doing. Amanda’s car is there and Lip tells Fiona about what has been happening with his new relationship. They hold hands and enjoy having each other around again. Sammi and Chucky set up their “home” which is an RV in the empty lot next to Sheila’s home.

Carl is seen walking Frank in his wheelchair. He gets up, gets out the bag of alcohol he has and takes a sip. Then another. He feels great and yells, “I’m still here” and a few other things as he relishes being out of the hospital, with his new liver, and his alcohol. He seems a little surprised that he is alive. He offers Carl a sip. Back at the house, we are left with a cliffhanger for next season when a couple is checking out the house in their car out front. They drive off after deciding they will come back another time when the family is home. Can’t wait until Season 5!