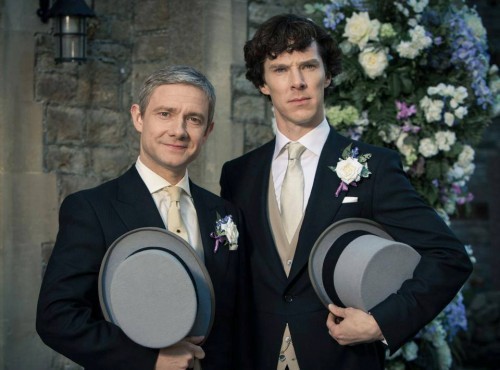 Tonight on MASTERPIECE on PBS one of television’s most anticipated series SHERLOCK continues with another new episode called, “The Sign Of Three.”   On tonight’s episode it is John and Mary’s wedding day and Sherlock is daunted by the task of delivering a Best Man’s speech. As part of the speech, he recounts cases they have worked on including a soldier being stalked and somehow stabbed in a locked shower, a ghost dating women he dubs “The Mayfly Man”, the last being part of John’s disastrous stag night, among others.  Did you watch last week’s premiere episode?  We did and we recapped it right here for you.

On last week’s premiere episode two years after his reported Reichenbach Fall demise, Sherlock, who has been cleared of all fraud charges against him, returns with Mycroft’s help to a London under threat of terrorist attack. John has moved on and has a girlfriend, Mary Morstan. Sherlock enlists Molly to assist him, but when John is kidnapped by unknown assailants and is rescued by Sherlock and Mary, John returns to help find the terrorists and an underground plot to blow up the Houses of Parliament during an all night sitting on Guy Fawkes Night.

On tonight’s episode the show continues with “The Sign of Three,” which finds Holmes facing a daunting challenge: delivering the best man’s speech on Watson’s wedding day. He also tackles another task: trying to stop a killer who may be stalking the wedding reception.   Sherlock informs John and Mary of the meaning of the sign of three. The title is based on the Holmes novel The Sign of the Four.

Tonight’s Sherlock season 3 episode 2 is going to be great, and you won’t want to miss it. So be sure to tune in for our coverage of Sherlock — tonight at 10 PM EST!  While you wait for our recap, hit the comments and let us know how excited you are about the new season of the Sherlock? Check out a sneak peek video of tonight’s episode below.

Tonight’s episode of Sherlock follows the Walter Gang robbery.  The Walters Gang, donning their clown masks, breaks into a bank after hours and empties out their safe.  Greg is determined to catch them in the act, he arrives at the bank with the entire police squad when he receives an emergency text message from Sherlock, telling him he “needs help now.”  Greg leaves the police force at the bank and rushes over to Sherlock’s house in a panic, only to find him trying to write a Best Man Speech for Watson’s wedding.  He called Greg over to help him.

The next day Mrs. Hudson brings Sherlock his morning tea, and catches him dancing.  It’s John’s wedding day, but Sherlock is less than thrilled.  Mrs. Hudson is obviously excited though, and Sherlock doesn’t want to hear it.  He sends her down the street to pick him up some biscuits.

John Watson and his bride tie the knot, and Sherlock and the rest of the wedding party head to the reception.  Mary’s bridesmaid enlists Sherlock to use his skills to help her find a man to go home with.

It’s time for Sherlock’s big best man speech, and he bombs it.  Apparently speaking in public is not Sherlock Holmes’ forte.  Sherlock didn’t even want the best man gig, but John shamed him into it by telling him that he was his best friend and needed him by his side.  Sherlock gave what must be the longest, most excruciatingly awkward, and accurately detailed best-man speech…ever.  And he finished the speech by telling the entire wedding reception that “he can’t congratulate John because weddings are a symbol of doom.”  He manages to recover the speech by adding that “Mary deserves John,” and that he and “Mary will never let John down.”  Sherlock goes on to tell everyone at the wedding party “funny stories about John,” which really aren’t that funny.

Sherlock goes on to tell the wedding-goers about “The Bloody Guardsman.”  Just days before his wedding John was going stir-crazy, so Sherlock agreed to take him out on a case.  He received an email from a Guardsman, named Private Bainbridge, that was scared of a photographer that he kept catching taking photos of him.  Watson and Sherlock head to the regimen to meet with Bainbridge, but when they arrive at the barracks the Guardsman is dead in the shower.  John tries to “examine the body” and realizes that Bainbridge is still breathing.  The strange thing is, the shower was locked when Bainbridge was stabbed and there is no murder weapon.  Sherlock reveals to the wedding party that he was never able to solve the Bainbridge stabbing.

Sherlock continues his speech with a retelling of a bizarre case, “The Mayfly Man,” he and John took on while completely drunk,   After a long night of drinking a client shows up at Sherlock’s in distress, she claims she just went out “with a ghost.”  She met a nice man and took him out to dinner, they went back to his place, and the man completely disappeared.  The man’s landlord told the woman that her date had died years ago.  Sherlock and Watson head over to the dead man’s apartment, still belligerent, to look for clues, or as Watson put it “clue for looks.”  After vomiting in the apartment while they are looking for clues, they wake up in a jail cell completely hung over.  John heads back to Mrs. Hudson’s to drink some alka seltzer and talk to her about his fast-approaching wedding.  Mrs. Hudson confesses that her wedding was a disaster, her husband was running a drug cartel and cheating on her, and when he was murdered she was grateful he was dead.  Upstairs Sherlock is still hung up on the case of the woman dating a ghost.  Sherlock gets online and realizes that the woman he met last night is not the only woman claiming to have “dated a ghost.”  He realizes that there is a man running around assuming the identities of dead men in the obituary and pretending to be them for a day, and dating women under their name.  Sherlock realized that the Mayfly, Ghost Date, was obviously a married man.  He was pretending to be someone else and date random women to escape his unhappy marriage for a night.

Sherlock finishes his Mayfly story and the entire wedding reception stares at him blankly.  Sherlock raises his glass to toast his best friends’ marriage, and it suddenly hits him.  Sherlock drops his champagne glass.  He suddenly remembers that the woman that dated a ghost had referred to John Watson, as John Hamish Watson.  No one knows John’s middle name but him, and a select few close friends and family.  Sherlock realizes that the Mayfly Man must be at the wedding.  He begins wandering through the wedding-attendees and trying to determine who the Mayfly Man, while he rambles.  John and Mary watch him, completely confused.  He texts Greg while he is giving his speech and tells Greg to “lock the wedding down.”  He says the code word “battle stations” while he is rambling, and John realizes “someone is going to die.”  Sherlock decides that the entire wedding reception should play the game “Murder.”  He has no idea who the murderer is, but he realizes the victim must be Watson’s close friend James Sholton, from the army.  Sholton has received multiple death threats since he lost several soldiers’ lives on a mission.

Sherlock finishes his speech and rushes off to follow to try to save Sholton.  Mary, Watson, and Sherlock rush upstairs to the hotel room that Sholton is staying in.  Sholton refuses to open the door though.  He is sitting inside with a gun waiting for someone to try to kill him.  Sherlock realizes that “The Bloody Soldier” was a practice kill, to practice murdering Sholton.  He realizes that “The Bloody Soldier” was killed by his own uniform’s belt.  He instructs Sholton not to take his belt off because when he does it will stab him to death.  Sholton finally opens the door and Watson heads inside to help him get the belt off without stabbing himself.

Meanwhile downstairs at the wedding Sherlock is flirting with the bridesmaid he befriended.  He demonstrates his secret ballet skills for the bridesmaid.

Sherlock and the wedding guests head back into the party and Sherlock plays a song on the violin for Mary and Watson to dance their first dance together as a married couple to.

Sherlock gives a final speech, apologizing for his previous speech, and then announces that Mary and John are expecting a baby.  Mary didn’t know she was pregnant though, Sherlock picked up on all of the signs.  Mary and John begin panicking, but Sherlock reassures them they have had plenty of practice taking care of him, and they will make great parents.