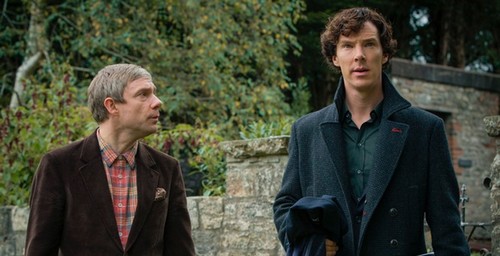 Tonight on MASTERPIECE on PBS one of television’s most anticipated series SHERLOCK continues with another new episode called, “His Last Vow.”   On tonight’s episode a case of stolen letters leads Holmes into conflict with a master blackmailer who knows the personal weaknesses of every important person in the Western world.  Did you watch last week’s episode?  We did and we recapped it right here for you.

On last week’s episode the show continued with “The Sign of Three,” which found Holmes facing a daunting challenge: delivering the best man’s speech on Watson’s wedding day. He also tackled another task: trying to stop a killer who might be stalking the wedding reception.   Sherlock informed John and Mary of the meaning of the sign of three. The title was based on the Holmes novel The Sign of the Four.

On tonight’s episode Sherlock Holmes encounters Charles Augustus Magnussen, the one man he truly hates, through a case of stolen letters. How will he tackle an enemy who specialises in blackmail and knows the personal weakness of every eminent person in the Western world?

Tonight’s Sherlock season 3 finale is going to be great, and you won’t want to miss it. So be sure to tune in for our coverage of Sherlock — tonight at 10 PM EST!  While you wait for our recap, hit the comments and let us know how excited you are about the new season of the Sherlock? Check out a sneak peek video of tonight’s episode below.

Tonight’s episode of Sherlock opens with Charles Agustus Magnussen being questioned regarding his involvement with the Prime Minister.  After his questioning he approaches the woman questioning him, Lady Smallwood, and threatens to blackmail her.  He has photos and letters proving her husband had an affair with a fifteen year old girl.  Charles says he isn’t blackmailing her, he just owns her.

Lady Smallwood heads to Baker St. after her uncomfortable meeting with Magnussen.

John Watson wakes up to a distraught woman named Kate beating on his door.  She says that her son Isaac is missing again, he has a drug problem.  She thinks he is at an abandoned house shooting up with his friends.  Mary and John get the address from Kate and head off to the address that Kate gave them.  John barges into the crack-house.  A man inside the house pulls a knife in John and tells him to leave before he “cuts him.”  John beats the stranger up, and heads upstairs.  He locates Isaac and finds him high as a kite, lying next to Sherlock.    John drags them both out of the drug den.

Sherlock insists that he isn’t on drugs, he was just undercover for a case.  Watson drags Sherlock to the office to test him for drugs, and it turns out he actually is not on drugs.

Sherlock heads home with Watson and finds his brother waiting for him.  His brother mocks him and makes fun of his “drug problem.”  Anderson is upstairs trashing Sherlock’s house looking for his drug stash.  Sherlock insists he doesn’t have a drug problem.  Sherlock reveals he is hanging out in drug dens because he is trying to bring down Charles Magnussen.  Sherlock’s brother warns him not to go after Magnussen, if he is going after Magnusses then he is going after him.

Watson heads to the kitchen and finds Jeanine in the kitchen in her underwear.  He is baffled as to why the woman is at Sherlock’s house.

After Sherlock gets out of the bath he confirms that Jeanine is his girlfriend.  He confides in Watson that he has every intention of taking down Magnussen, despite Mycroft’s warning.  Watson still can’t get over the fact that Sherlock actually has a girlfriend.

Sherlock takes out his computer and says that Magnussen has the “Alexandranian Library of secrets and scandals,” which is called “Appledore.”  Magnussen is too smart to keep his information on computers though, it is all stored on hard-copies.

While Sherlock is discussing his plan to take down Magnussen, Magnussen shows up at his house.  Sherlock explains to Magnussen that Lady Smallwood has hired him to gain possession of the letters he is blackmailing her with.  Magnussen keeps ignoring Sherlock, and talking cryptically about Lady Smallwood.  He pulls down his pants and urinates in Sherlock’s office, then blatantly says he is “keeping the letters.”  Then he leaves.

Sherlock is thrilled because he thinks his plan is working, Magnussen thinks that he is a drug addict, and has obviously under-estimated.  Sherlock know Magnussen’s schedule, he plans to steal the letters back while he is out an event tonight.

Sherlock and Watson head to Magnussen’s office to scope it out.  Sherlock reveals that there are fourteen levels of security they have to get through before they can get into his office and steal back Lady Smallwood’s letters.  Sherlock can’t get through the door of the office without Magnussen’s personal assistant ID’ing him.  Coincidentally the personal assistant is Jeanine.  Sherlock holds an engagement ring up to the camera, so Janine obviously lets him through the door.  Watson is shocked that he really just proposed to her so he could break into Magnussen’s office.  Once they get into the office, they find Jeanine passed out on the floor.  They assume she has fainted from the proposal.

Sherlock smells perfume and hears a noise upstairs.  He finds Magnussen on his hands and knees with someone holding a gun to his head.  He assumes the person holding the gun is Lady Smallwood, to his shock the woman turns around and it is John’s wife Mary.  She tells Sherlock not to take a step or she will shoot him.  He doesn’t believe her, he takes a step towards her, and Mary shoots Sherlock in the chest.

Watson rushes upstairs and finds Sherlock unconscious.  He calls an ambulance.  Mary is gone.  He has no idea his wife shot Sherlock Holmes.

Sherlock pulls through.  Mary rushes to the hospital to join Watson.  She sneaks into Sherlock’s room and warns Sherlock, “you don’t tell John.”

Sherlock wakes up hours later, and Janine is sitting at his bedside.  She’s aware that Sherlock was using her to get into her boss’s office, and she’s not too happy about it.

Sherlock slips out of the hotel room when no one is looking.  Mary begins hunting for him, concerned that he will tell Watson that she shot him.  Sherlock calls Mary, and meets him at a secret location.  Sherlock realizes that Magnussen is also blackmailing Mary, he offers to take her case.  Mary begs Sherlock not to tell John, but she is too late, Sherlock turns on the light and reveals John has been standing in the hallway listening to their entire conversation.  Now he knows she tried to kill Sherlock.

Sherlock’s brother Mycroft, and his new protégé Billy join Sherlock at his house to celebrate his return home from the hospital with his Mom.  Watson and Mary are both in attendance for Sherlock’s “welcome home party.”

John doesn’t appear to be ready to take Mary back though.  He tells her to “sit in the client chair,” and instructs her to “explain what she is like a client,” and then they “will decide if they want her or not.”

She hands over a flashdrive with the initials, “A.G.R.A”  She says they are her initials, and everything about her is on the flash drive.  Mary is an assassin, and she says Magnussen has “documents on her that could put her away for life.”

Several months later…Mary is very pregnant.  Watson pays her a visit to tell her that he has forgiven her, he doesn’t care about their past, just their future.  He does remind her that he is still very “pissed off” at her though.

It’s Christmas, Sherlock, Mary, and Watson are at his Mom and Dad’s house.  Mary passes out, then Watson realizes Sherlock has drugged both his parents.  Sherlock tells him that they have a “meeting with the devil.”  Sherlock’s protégé Billy is to stay behind and watch his passed out parents and Mary and Mycroft.

Sherlock steals Mycroft’s laptop, and they head outside.  A helicopter is approaching.  Watson is still confused about what exactly Sherlock’s plan is.  Sherlock simply states they are “going to Appledore to make sure Mary’s secrets are safe.”

Sherlock and Watson arrive at their private meeting with Magnussen.  Magnussen reveals that he is the one that put Watson in the fire, and he videotaped Sherlock rescuing him “for leverage.”  Magnussen thinks that Sherlock’s brother Mycroft is the most powerful man in the country, and he “wants him.”  Sherlock hands over Mycroft’s computer and wants everything Magnussen has on Mary in exchange for it.

Magnussen reveals that Sherlcok has screwed up, there are no hard copies of information on any of the people he blackmails.  He has photographic memory just like Watson, and he stores everything in his head.

Magnussen has actually set up Sherlock.  A helicopter and swarm of police officers arrive, and Sherlock and Watson will be caught red-handed trying to sell Mycroft’s files to Magnussen.  Sherlock asks Magnussen one last time, “to clarify all of the files you have on people are in your head?”  Magnussen confirms, so Sherlock pulls out a gun and shoots him in the head in front of all of the cops.

Sherlock’s brother Mycroft is forced to arrest him for the murder of Magnussen.  Fortunately for Sherlock, it is up to Mycroft and Lady Smallwood to determine his fate.  They can’t put him in prison because it will cause an uproar.  Mycroft is sending Sherlock away.  John and Mary see him off at his plane.  It is implied that he will never see John again, they say their good-byes.  Sherlock boards his plan for exile.

Every television in the country suddenly switches to Moriarty’s face, and plays the same reel over and over.  “Did you miss me?  Did you miss me?”  Mycroft calls Sherlock and has him turn his plane around, his exile is over.  They need Sherlock’s help, Moriarty is alive!