Shia LaBeouf Arrested For Disorderly Conduct At Broadway Play: Dragged Away In Handcuffs! 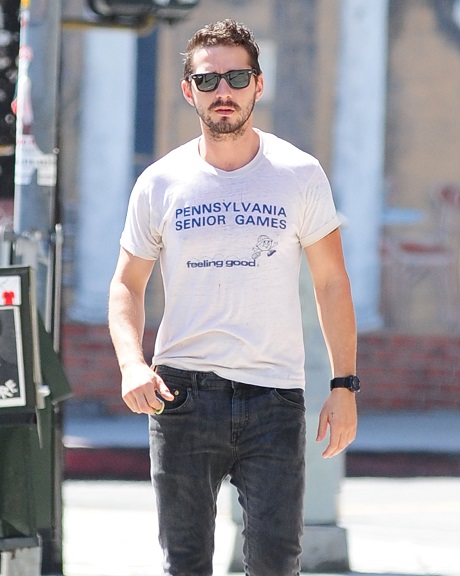 It seems Shia LaBeouf’s crazy tour is still going strong, and it may not be ending anytime soon. LaBeouf, 26, was charged with disorderly conduct and criminal trespass Thursday night. He was handcuffed and led out of Studio 54 during a production of Cabaret in New York City, reports Us Weekly.

The actor, who is becoming more well-known for his wild antics than his acting skills, was reportedly being completely disruptive during the show — to both patrons and performers. In addition to chain smoking inside the theater, a source told Us Weekly that “Shia seemed out of sorts. He was interacting with strangers during the show and slapping peoples’ backsides. He was trying to avoid the police and fell. Then he was cursing at the police while being taken into custody.” Page Six reports that Shia was actually “slapping random people on the back of the head.”

Another source confirmed that he was crying as he was taken away in handcuffs by police. He was taken to the station for questioning. Page Six reported that Shia was acting belligerent at the precinct, even telling officers who were trying to remove his handcuffs, “F**k you. I’ll f**k you up.” It was then that the actor was forced to wear a face mask, because after officers kept his cuffs on, he started spitting and would not stop. Too bad Shia didn’t wear his paper bag to the show. He could have completely avoided the whole “spit mask” thing.

Looks like Shia may be planning another “art exhibition” to say #IAMSORRY again. Tell us what you think of Shia’s latest meltdown. Is he just a quirky actor, or does he need mental help? Weigh in below.