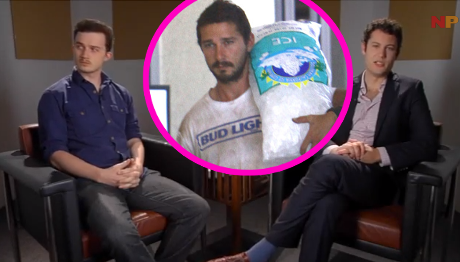 Shia LaBeouf has been catching a lot of heck as of late. After being caught in a plagiarizing scandal that had the celeb world buzzing for days, the actor (who’s actually quite funny and talented when he’s not hyped up on crazysauce) went ahead and further buried his career by involving himself in a childish pub fight in London. A man was allegedly talking trash about Shia’s girlfriend’s mother and Shia thought the most logical thing to do was headbutt the guy. You know, to get even stevens.

In a funny new video released by Nacho Punch, Shia (played by Nick Smith) is spoofed in a mock interview where he attempts to apologize for his latest plagiarizing scandal but can’t quite manage to locate a truthful response. Poor Shia channels everyone from Kanye West to Miley Cyrus to Britney Spears as he attempts to answer questions asked by Brian Gowens (played by Jon Eidson).

What do you think about Shia LaBeouf’s recent explosion and sudden decline? He was being so successful and prolific for a while — and some even thought he’d rise to being a serious actor with the potential to earn great, critically acclaimed roles. Is Shia’s time in Hollywood on the outs? Is it only a matter of time before the Transformers actor runs away from the limelight?

Check out the hilarious sketch below and let us know if you think it’s at all indicative (in your eyes) of Shia’s current behavior. Does it bother you how he’s been acting? Or could you care less about this star, who crawled his way into Real Hollywood from the depths of Disney Channel Helldom?